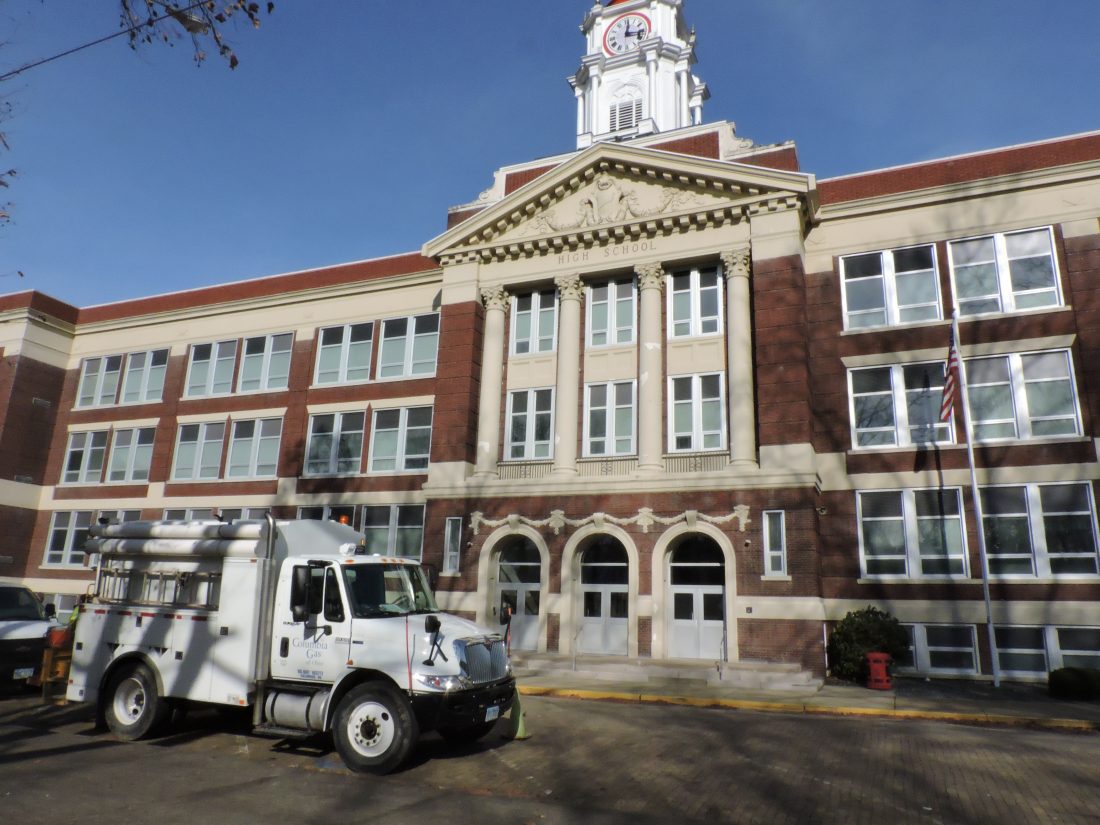 Bellaire High School was evacuated for a time, along with St. John Central Academy, Indian Run Elementary and the Carnes Senior Center. The moves came due to an odor some believed was the smell of natural gas in the village of Bellaire.

Students of the high school were relocated by bus to Bellaire Middle School on Thursday morning, while students of St. John and Indian Run were sent home for the day. Law enforcement, fire officials and gas company crews were all on scene attempting to locate the source of the odor.

Police Chief Dick Flanagan said phone calls reporting the smell of natural gas in various areas of the village began coming in around 10 a.m. By 1 p.m., the smell has dissipated and “things were back to normal,” he said.

“We don’t have a broken gas line. … It was probably a well pad relieving some pressure through the transmission lines,” Flanagan said.

Dave Rau, communications manager at Columbia Gas of Ohio, said numerous crews with the gas company were dispatched throughout the village to test the area for a natural gas leak. The Bellaire Police Department and the Bellaire Volunteer Fire Department were also on scene.

According to its website, Columbia Gas of Ohio is the largest provider of natural gas service in the state. The gas company had received multiple reports around a large area of the village of a gas-like odor, Rau said.

“They (gas crews) are checking to make sure it is safe. There has been no indication of a gas leak, but we’re going to continue checking,” he said Thursday afternoon.

Throughout the village, crews inspected sewers, cracks and openings in the streets and sidewalks, lawns, and around buildings’ exteriors and interiors to ensure there was no leak, Rau said.

“They have a gas detector they use to test for methane, the primary component of natural gas,” he said.

Crew members are well trained and thorough in detecting any leaks, Rau said.

“At this point we believe the odor is coming from somewhere else,” he said.

After an extensive inspection around parts of the village, crews found no indication of a gas leak. Columbia Gas cleared the high school for re-entry around noon, and staff and students were able to return to the school. Bellaire schools will return to a regular schedule today.

“If anyone calls to report an odor, we will continue to come out and check it. We want to keep everyone safe,” Rau said. “Crews will remain on scene as long as there are reports.”

Rau said the company’s main concern is for the safety of the community. The odor dissipated after a couple of hours, Rau said, which leads him to believe it is coming from another source.

“Other sources can produce a similar smell to that odor,” he added.

Rau would not speculate, however, on what the alternate source could potentially be.

Flanagan said the same issue also occurred across the Ohio River in Marshall County and in communities including McMechen, Benwood and Wheeling. The origin of the odor was undetermined at press time.

If anyone smells a “gas-like” odor, Rau recommends they leave the area immediately and call 911. They should then report the issue to Columbia Gas by calling 800-344-4077.