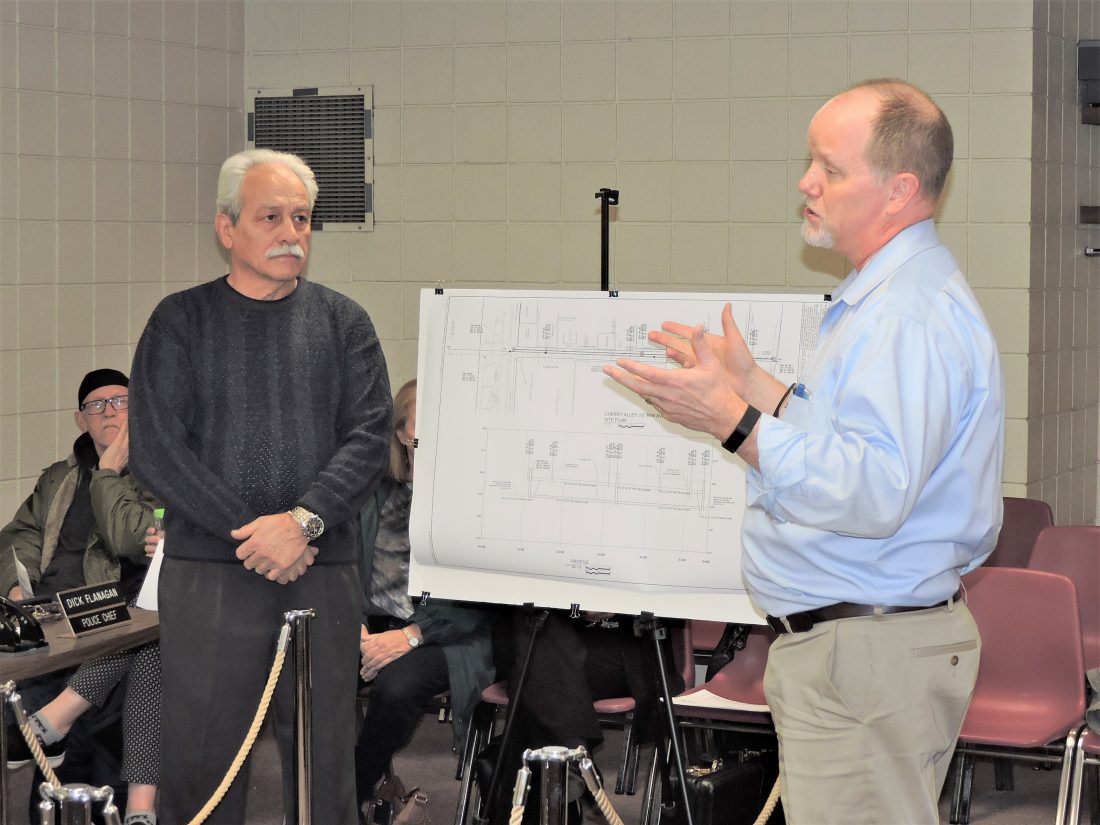 T-L Photos/SHELLEY HANSON ABOVE: PROJECT MANAGER Danny Popp, left, owner/architect with DDP & Associates of Columbus, Ohio, and Dave Kohlmeier, vice president of CTI Engineers, present council with the plans for a new storm sewer line on Cherry Alley that runs between Belmont and Guernsey streets in the downtown.

During a regular meeting Thursday, project manager Danny Popp, owner/architect with DDP & Associates of Columbus, Ohio, and Dave Kohlmeier, vice president of CTI Engineers, presented council with the plans for the job that will involve installing a new storm sewer line on Cherry Alley, the alley which runs between Belmont and Guernsey streets in the downtown.

The village already has secured a Small Government Grant from Ohio Public Works for $254,088. The total cost of the project is $343,362. The village is contributing $79,274 worth of in-kind money, which is the estimated contribution by city employees’ work on the project, and $10,000 in actual village funds.

The storm sewer is collapsing, and is located behind businesses such as Dollar Tree, Gulla’s and 24/7 Pizza.

The process was a competitive one. 92 communities initially submitted applications, with 57 of those being approved. The village’s project was ranked No. 15 on the list of those approved.

Both Popp and Kohlmeier warned that the project was going to be more complicated than originally thought. There is an underground fiber optic wire running under the alley, and the original storm sewer is about 15 feet deep.

Bids for the job are expected to be advertised in the near future.

In other matters, police Chief Dick Flanagan said Belmont County’s SWAT team — with help from Bellaire — conducted a raid on a house where crystal meth was allegedly being made and dealt at 3811 Harrison St. The resident there, 39-year-old Eric Bennington, was arrested.

He is being held on a total of $30,000 in bonds at the Belmont County Jail. His charges include possession of drugs and trafficking in drugs.

Additionally, Village Solicitor Michael Shaheen advised council that it should proceed with releasing funds from the volunteer fire department’s fund to allow for a pay back to firefighter Raymond Penyak, who made a credit card purchase of $1,475 for dress uniform pins.

Penyak made the expenditure, with Auditor Tom Sable’s approval, so he could have the items needed to be a funeral pall bearer for a fellow firefighter — Richard “Rick” St. John, 49, of Bellaire — who died Nov. 8. St. John died when a trench he was working in collapsed on top of him.

Sable said he talked with Penyak about the matter on a Sunday, and told him that he did not know off-hand how much money the VFD had in its fund, but that he could follow a “then and now” procedure.

There was some discussion on the matter before a vote was taken. Council ultimately approved releasing the funds to the VFD auxiliary who in return would pay back Penyak. The fund has about $3,500 in it, more than enough to cover the expenditure. Councilman Mike Doyle abstained from voting on the matter because he said he was not sure if the expenditure was the correct use of the money.

“It seems convoluted,” Doyle said. “But the individual who put it on their credit card did it in good faith.”

Also, resident Bob Evonek asked that street lines and curbs be repainted in areas of the village where they have worn away. He also asked that a section of road behind the former Bellaire hospital be repaved.

Resident Richard Johnson complained about having to pay $100 deposit fees on his new water bill accounts when his tenants are sometimes not required to pay the entire amount on their late bills. Councilwoman Nikki Liberatore suggested that Johnson keep all the rental water bills in his name so he did not have to pay a deposit fee each time he got a new tenant.

Councilman Jerry Fisher said sometimes the village will set up a payment plan to allow residents who a lot on their bills to pay it off in increments. Johnson said over the years he has had to pay on those late bills when his tenants leave.

Council also held a closed-door session regarding potential litigation and pending litigation on real estate. No action was taken during the open portion of the meeting.

Also, Councilman Dan Brown brought a round of Gulla’s hot dogs and soda to the meeting for all present to enjoy, as his way of saying farewell. Brown opted not to run for re-election this year, so Thursday was his last regular meeting with council.

Council canceled its next regular meeting on Dec. 19. It will have a short sine die meeting at 6 p.m. Dec. 30 during which any possible legislation leftover from 2019 will be considered.