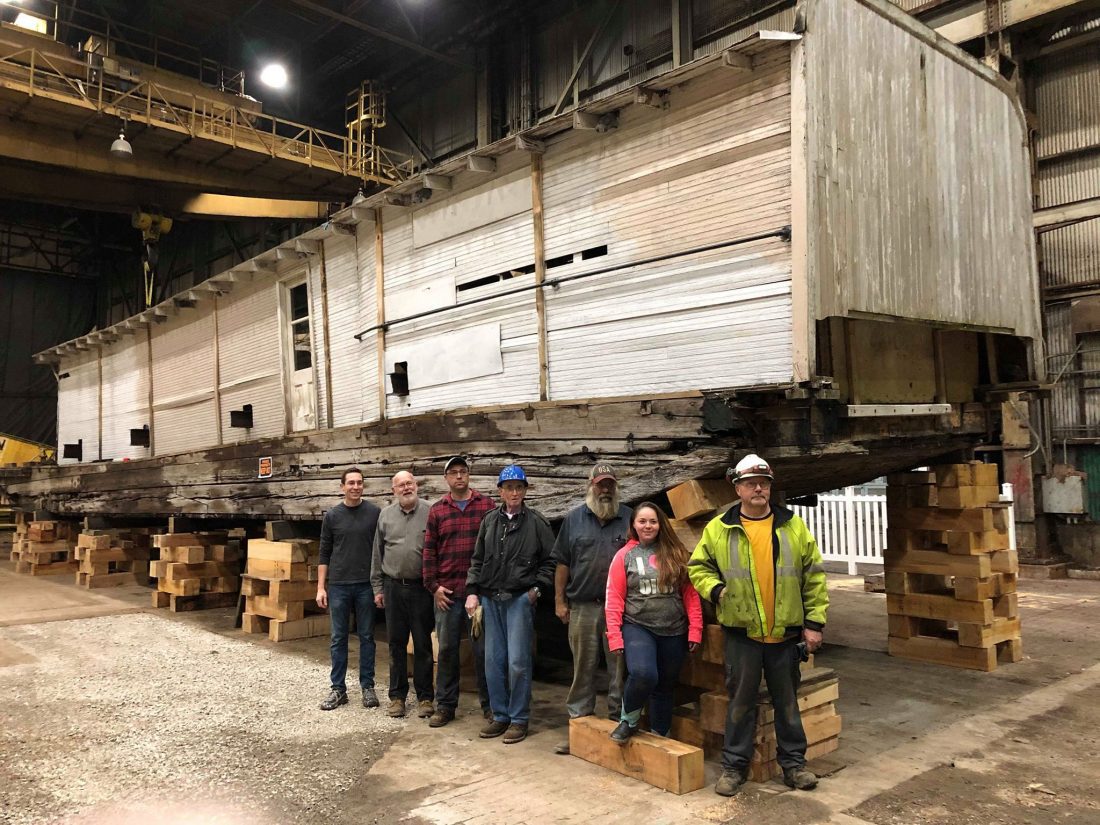 Ohio Valley River Museum board members and Hannibal Industrial Park officials stand next the J.A. Cresap boat on Wednesday. The vessel returned to the county after nearly a century.

CLARINGTON — A vessel that has been away for nearly a century made its long-awaited return to the Ohio Valley this week.

The J.A. Cresap returned to Monroe County from Guttenberg, Iowa, after 96 years on Tuesday. The vessel was donated to the Ohio Valley River Museum, which will perform restoration work on it. The historic boat was built by the Mozena Bros. Boatyard in Clarington in 1923.

Museum President Taylor Abbott said it is “surreal” having the boat back in the Ohio Valley. He breathed a sigh of relief when it finally arrived, Abbott said.

“After 96 years, we just wanted it to come back safe and sound, and it did,” he said. “This has been an unbelievably huge project from the very beginning. I can’t speak highly enough of the team effort put forth by our board and our excellent volunteers.”

Abbott said the boat’s former owner, Gary Frommelt, donated the vessel to the local museum last December. The museum has worked closely with Frommelt, Aylsworth Housemovers Inc., STS Trucking and the U.S. Army Corps of Engineers to plan the safe transport of the 70-foot-long vessel, he said.

“It took a lot of planning, but we’re unbelievably happy to have it back,” Abbott said.

According to the Ohio Valley River Museum, the Cresap is the last surviving wooden-hulled vessel of its kind. Abbott said experts in the wooden-hull boat building and historic preservation field will work along side museum board members to plan the vessel’s restoration.

Museum supporters have worked for the past year to plan the return of the boat; however, the trip included a few bumps in the road. The vessel originally was set to make its return in September, but due to the boat needing “additional securements” before it could be transported the date was changed.

“It was a major setback,” Abbott said.

“The move of such a massive object was not easy. Rodney Rufener, Janet Conn, Gary Frommelt, Jack Berisford, David Reid and the team assembled to unload the boat are to be commended on their hard work,” Abbott said. “We wouldn’t have been able to do all this without them.”

“We’re closing in on that now,” he said.

Following the boat’s arrival, museum board members, Hannibal Industrial Park officials and others gathered Wednesday at the warehouse where the boat remains stored for the restoration process. A ceremony was held so that people could observe the newly returned vessel and also discuss its future restoration plans.

As of now, the cost of the restoration is uncertain. Abbott said an assessment of the vessel will take place during the winter months and a thorough restoration plan will be finalized. The restoration project is expected to take around two years to complete. Upon completion, the boat will be on display at the Hannibal Locks and Dam for all to view.

For additional information on the vessel, call 740-391-6304 or visit www.ohiovalleyrivermuseum.org.