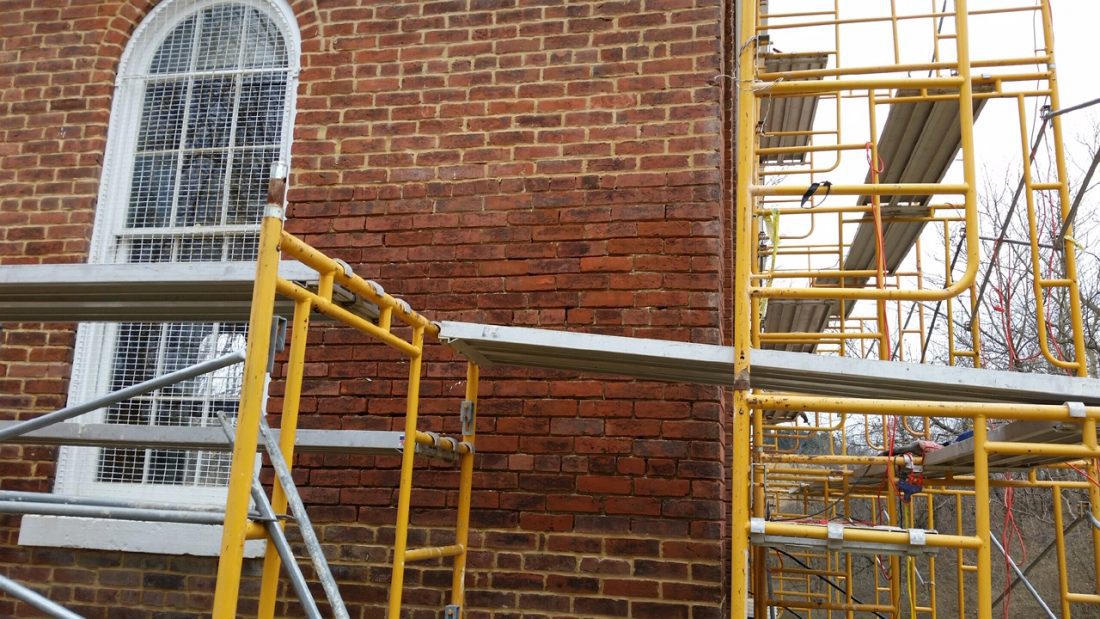 ST. CLAIRSVILLE — The first series of renovations to a historic schoolhouse in Belmont County is complete.

Thanks to “generous donations” from multiple donors, the Great Western Schoolhouse, located on the Ohio University Eastern campus, was able to receive a “facelift.” Schoolmarm Ann Rattine said the schoolhouse received brick work done by Adventures in Elegance of Wheeling. The school had two sides of its exterior tuckpointed, the south and west walls.

“The clay for the bricks, which were hand-kilned on the property, was obtained from a nearby farm pond. The tuckpointing process grinds out the old mortar, and new restoration-grade lime mortar is inserted,” she said.

Rattine said it is important to use the special mortar because modern-day mortar may crack the fragile old bricks. The restorations took a bit longer than anticipated, she said, due to the weather.

“The weather was a problem.

“We had some snow and a lot of rain, and you can’t work with mortar when it rains,”

The school, situated off of National Road, was constructed in 1870 and is a single-room facility west of the university’s main campus driveway.

The facility closed its doors in 1952 as a school, until 1976 when the first round of repairs began. Additional renovations have been performed on the building for the past 10 years.

The total cost to renovate for all four outside walls was estimated at nearly $60,000. Rattine raised some money for the exterior brick restoration; however, she was only able to secure $29,00 to complete two of the four exterior walls.

The restoration company completed the two walls at the end of December, she said.

Rattine said she hopes to have the remaining two walls renovated by October. The cost to complete the exterior project is $39,400.

“I’ve applied for grants. I have a couple out right now but haven’t heard anything back so far. I’d love to have it done before the Oct. 10 celebration,” she said. “I don’t know if I can find the funding. … It’s more money because we’re also doing the grates on the foundation.”

The schoolhouse will celebrate its 150th anniversary on Oct. 10-11. Additional information concerning that event will be released at a later date.

The school’s next project will be the installation of storm windows to aid with the building’s heating and cooling, Rattine said.

National Trail No. 348 of the International Questers would like to thank donors for their contributions to the brick work project, including The Charles M. & Thelma M. Pugliese Foundation, Community Foundation for the Ohio Valley, Belmont County Tourism Council, Home Savings Foundation and St. Clairsville Noon Rotary.

“Without the support of organizations and foundations, the restoration projects which have been conducted at the school would not be possible. National Trail No. 348 is searching for funds to complete the other two sides of the building,” Rattine said.

Nowadays the historic building is a “working museum” and is toured by hundreds of students each year.

“It is the only building in Belmont County that depicts a true one-room school that would have existed in the 1870s to the early 1900s,” she said.

Rattine educates students in first grade through college about what it was like learning in the past.

“Students come spend the day reliving the past. It’s an educational program where students experience what they would have experienced during that time period. We read from the McGuffey Readers, do arithmetic, have a spelling bee and play indoor and outdoor games,” she said.