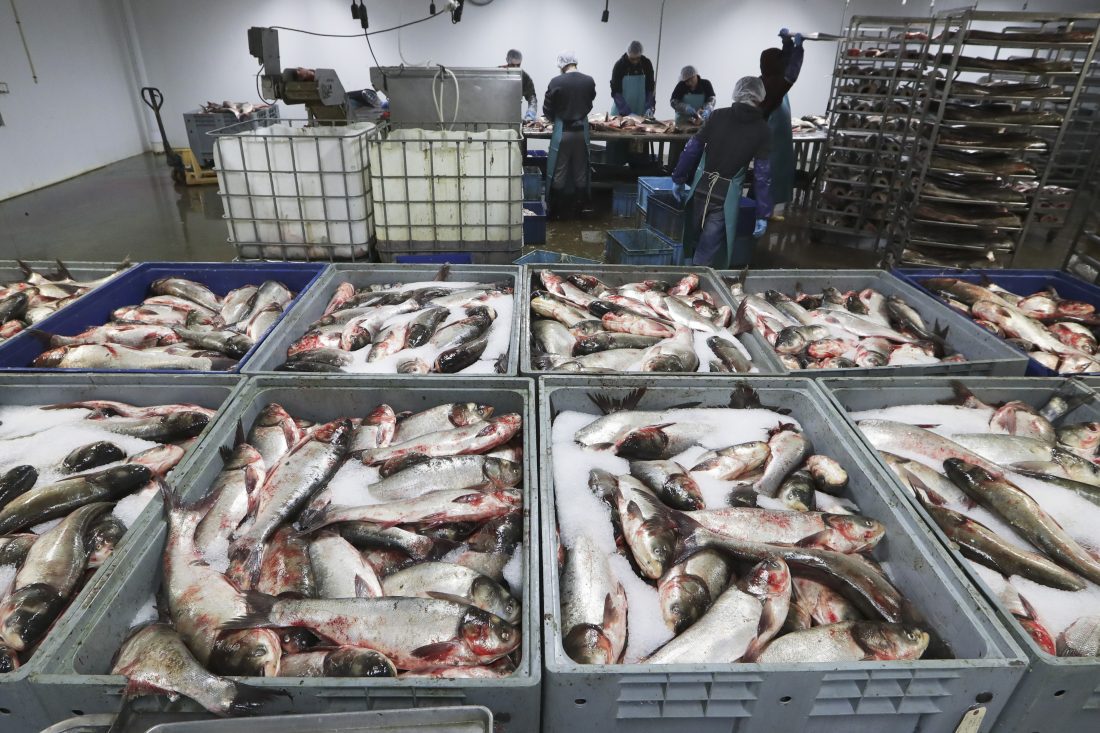 In this Feb. 11, 2020, photo, Asian carp are processed at Two Rivers Fisheries in Wickliffe, Ky. Asian carp were imported to the U.S. in the 1960s and 1970s as an eco-friendly alternative to poisons for ridding southern fish farms and sewage lagoons of algae, weeds and parasites. The advance of the invasive carp, however, threatens to upend aquatic ecosystems, starve out native fish and wipe out endangered mussel and snail populations along the Mississippi River and dozens of tributaries. (AP Photo/Mark Humphrey)

The ongoing roundup on wind-rippled Kentucky Lake opens a new front in a 15-year battle to halt the advance of the invasive carp, which threaten to upend aquatic ecosystems, starve out native fish and wipe out endangered mussel and snail populations along the Mississippi River and dozens of tributaries.

State and federal agencies together have spent roughly $607 million to stop them since 2004, according to data compiled by The Associated Press. Projects in the works are expected to push the price tag to about $1.5 billion over the next decade.

That’s more than five times the amount predicted in 2007 when a national carp management plan was crafted, and no end is in sight. Programs aim to reduce established populations and prevent further spreading, but wildlife officials concede they may never be able to eradicate the prolific fish.

Much of the focus has been on limiting their northerly migration and keeping them out of the Great Lakes, where experts say they could devastate a $7 billion fishing industry. That effort features an underwater electric barrier near Chicago, water sampling for carp DNA, subsidies for commercial fishers and experiments with a mass roundup-type harvest.

It has been largely successful, although the lakes remain vulnerable and grass carp — one of the Asian varieties — have been spotted in Lakes Erie, Ontario and Michigan.

Less money and attention have been paid to the carp’s virtually unchecked spread east and west into the Missouri and Ohio rivers, among others.

Asian carp were imported to the U.S. in the 1960s and 1970s as an eco-friendly alternative to poisons for ridding southern fish farms and sewage lagoons of algae, weeds and parasites. They escaped through flooding, deliberate stocking and other means.

“It was a dumb idea,” said Joel Brammeier, president of the advocacy group Alliance for the Great Lakes. “Even back then, biologists understood the risks of bringing live, non-native animals into the country. It should never have happened.”

Greg Conover, a U.S. Fish and Wildlife Service biologist who oversaw development of the national Asian carp strategy, realized how abundant they were becoming in the Mississippi River as he studied native paddlefish in the 1990s.

“At first there were no carp, then we were catching a few carp here and there, then eventually we were filling the nets with carp and no paddlefish,” he said.

Sport anglers are feeling their impacts. Scientists reported that carp in the upper Mississippi are out-competing prized native fish such as yellow perch and bluegill. And silver carp hurtle from the water like missiles when startled by boat motors. Collisions have broken noses, jaws and ribs.

There are no precise estimates of Asian carp populations in U.S. waters, but there are believed to be millions. At times, they’ve totaled up to 90% of all fish populations on some backwaters of the Mississippi River. On two large reservoirs in Kentucky last year, commercial fishermen brought in 6 million pounds (2.7 million kilograms) of Asian carp.

Asian carp are established in much of the central U.S. They grow quickly and reproduce abundantly; females lay up to 5 million eggs at a time. Silver carp mature in three to four years and can grow to about 60 pounds (27 kilograms). Bighead, the largest, can reach 110 pounds (50 kilograms).

Grass carp — the only Asian carp species that can still be legally imported for weed control — have been found as far west as Utah, and in Florida and New York.

Early attempts to rein in Asian carp were slow going.

“For years we couldn’t even catch them,” said Frank Fiss, fisheries chief of the Tennessee Wildlife Resources Agency. “We had to adapt our gear to get the right gill nets, the right electroshocks. There was a steep learning curve.”

Some fish farmers didn’t want the carp banned. States were slow to act. One control method, commercial fishing, hit a snag when processors realized that while the carp are a prized food in China, buyers there like them fresh, not frozen.

But control efforts are increasing and becoming more successful. In the upper Illinois and Des Plaines rivers last year, a combination of the roundup method and commercial fishing helped pull in 1.5 million pounds (680,000 kilograms) of carp, said Kevin Irons, aquatic nuisance species manager with the Illinois Department of Natural Resources. Irons said they have seen a 96.7% drop in the Asian carp population on that stretch of river since 2012.

Still, the Illinois remains infested. To prevent carp from migrating northward into Lake Michigan, the U.S. Army Corps of Engineers is proposing the priciest initiative yet: fortifying a lock and dam on the outskirts of Chicago with an electric barrier, underwater speakers blasting irritating noises, and air bubble curtains. The project, awaiting congressional approval, could cost more than $800 million.

If the fish fence works, fisheries officials hope to keep the carp from moving farther into Tennessee. Silver carp already are turning up in Tennessee’s Duck River, one of the most biologically diverse in North America.

Angie Yu, a Chinese-American in the import-export business, moved from Los Angeles to Kentucky in 2012, seeing the Asian carp problem as a business opportunity. In her first year, Yu shipped a half million pounds to China. “I had my Waterloo there. It totally failed,” she said.

Since then, she has concentrated on markets in Europe and the Middle East with products including fish dumplings and sausages.

“This fish is big in the world seafood industry,” Yu said. “Only in the U.S. we don’t eat these fish.”

Part of the reason is because they are bony, and part is probably because Americans associate the name “carp” with bottom feeders. But Yu hopes to change that.

At the carp roundup on nearby Kentucky Lake, wildlife officials hope to harvest over 1 million pounds in a couple of weeks — a drop in the bucket on the massive reservoir.

But Duane Chapman, a research fish biologist with the US. Geological Survey who helped develop the harvest method, thinks it’s possible to reduce the population of Asian carp in the lake to a level where they are no longer a problem.

“There’s nothing magic about bighead and silver carp,” he said. “They are just like any other fish. We manage all kinds of fish. … And we can go in and control them if that’s what we want to do. And I think most of us want to do that because we really prefer to have bass and catfish and crappie.”