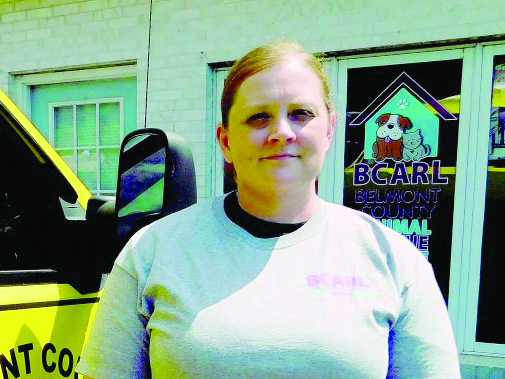 ST. CLAIRSVILLE — The Belmont County Animal Rescue League will not renew the contract of its executive director this year.

The organization announced last week via a news release that it has declined to renew the contract of Jennifer Woollard. Woollard has been with the nonprofit organization for the past six years. She began her career with the group as a member of its board of directors in 2014 and was later hired as the executive director in 2017. In June, she was sworn in as a humane agent as well.

Nathan Daniel Blake, public relations liaison for BCARL, said the organization has contemplated the decision to terminate the position for more than a year.

“It’s been an ongoing conversation since 2018,” he said. “We’re thinking of the best way to structure and to move the organization forward, and that was one of the decisions made.”

Woollard’s last day of service with the nonprofit was Wednesday, Blake said.

Blake said that although Woollard was the county’s humane agent, another humane agent is on staff, along with two additional staff members in training. He said he wants to assure members of the community that personnel are available to handle the responsibilities and to ensure there is no interruption in the services BCARL provides.

Blake said there were no specific events that led to the discussions regarding terminating the executive director position.

“It came out of larger discussions about the best way to differentiate their mission from some of the other animal-related organizations doing amazing work in the community,” he said.

He said BCARL’s mission is similar to that of its counterparts, however there is a key difference — BCARL is not a county-run shelter.

“They (BCARL) are essentially first responders contracted by the county to step in when there are cases of animal abuse or neglect,” he said.

In the meantime, members of the board of directors and volunteers will divide the responsibilities of the former position among themselves.

“We want to make sure everyone is doing everything they can to help the organization move forward,” Blake said.

He said the league is attempting to become “less administrative” and more centered on animal care.

Blake said the nonprofit is in process of examining its branding, structures, processes and overall mission in the county. At the beginning of the year a consultant firm was brought in and a contract was signed with an agency specializing in nonprofit communication, according to the release. The agency, Folklore out of Wheeling, was hired to assess BCARL’s current brand and then suggest ways the nonprofit could better execute its desired mission.

“We were hired to help with their capital campaign, manage social media and run them through a complete rebranding and refocusing of their messaging to better articulate their mission,” Blake said.

According to the release, BCARL officials are in the process of obtaining a complete understanding of where the organization stands following Woollard’s departure, including a financial audit and analysis of the processes and structures that were in place during her time as executive director. The release adds that the organization is not in a position to discuss specific details until a “complete picture” is established.

Blake said Woollard will not remain within the organization in any capacity moving forward. However, it is uncertain if the position will become filled later on.

“It’s unclear if we will hire (for the position) in the future,” he said.

In addition to the organization’s rebranding and reorganizing, the nonprofit recently moved into its new location, the former Sunset Motel property located off National Road near Belmont. Renovations to the new property are underway.

BCARL purchased the former motel in September in hopes of using the space to house abused and neglected animals. The new property consists of three areas — a house, a row of motel rooms behind the house and a mobile home situated on the back of the property.

Blake said the organization already has begun the transformation of the property to a safe place for rescued animals to recover and be rehomed.

“The animals are using it (the facility) now, and the administrative office has moved there,” he said.

Officials are hoping to have construction completed within the next year.

Anyone interested in volunteering, fostering or adopting can call 740-296-8644 or email bcarlweb@gmail.com.