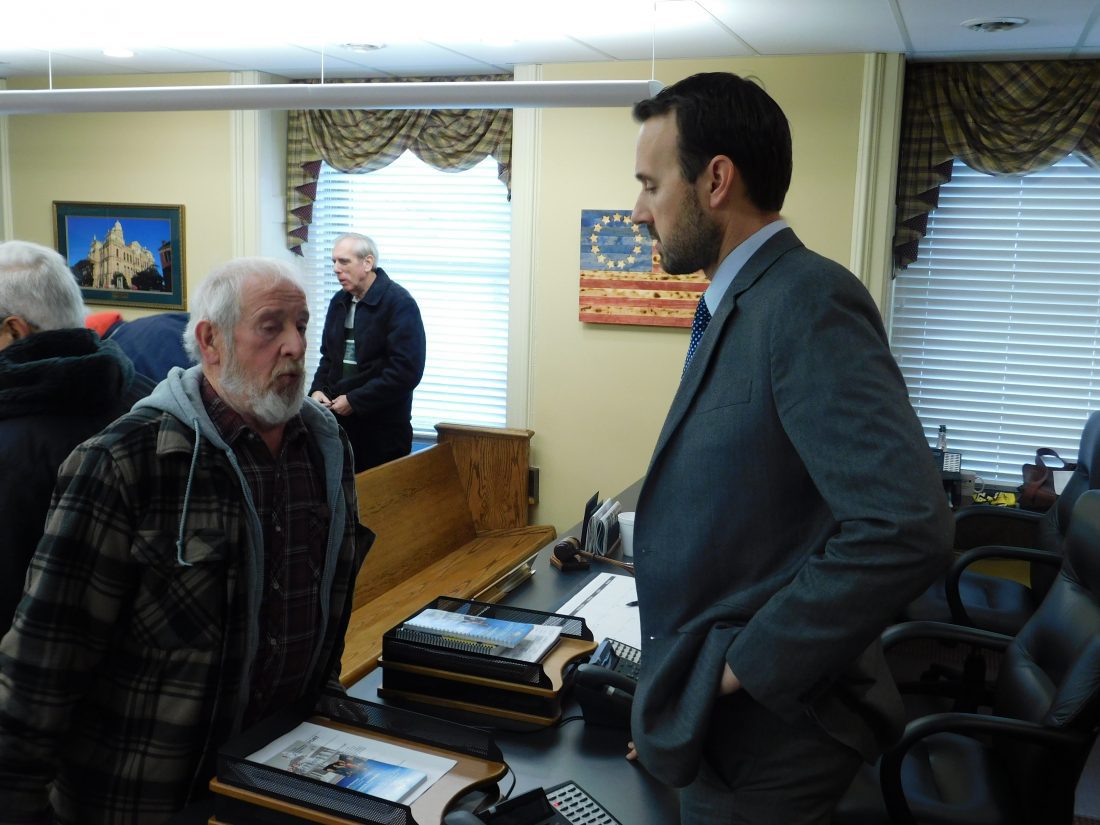 T-L Photo/ROBERT A. DEFRANK John Drewett of Shadyside asks Belmont County Commissioner J.P. Dutton on Wednesday when a 2-year-old Lashley Road slip will be repaired. Dutton said the commissioners continue to work with the county engineer and FEMA to fund projects from 2018’s bad weather.

“We’re here to do an update of what’s going on with the grant,” Schlanz said, noting the work resulted from the severe storms, flooding and landslides that occurred Feb. 5-19, 2019. “Unfortunately for the last couple of years we’ve had a lot of hard-raining storms. The grant we had for February (2018) ended at the end of the year, December, and we got this new grant in.”

“Ohio received official notice of award from the Department of Labor May 22,” Schlanz said, adding the grant period was April 1, 2019, through March 31, 2020.

Schlanz said the workers are limited to 2,080 hours per grant and the hours began again when participants were transferred to the new grant project.

“We anticipate the majority of workers will be able to work this entire grant,” he said. “The Department of Labor extended the ending of the grant from March 31 to Dec. 31 of 2020. … The work will be ending towards the end of November.”

In answer to a question from Commissioner Jerry Echemann, Schlanz said he does not expect a further grant.

“There’d have to be a natural disaster occurring,” he said.

In answer to additional questions from Echemann, Schlanz explained that jobs funded through a dislocated worker grant go to workers who meet different eligibility requirements, such as long-term unemployment.

“Maybe somebody was permanently laid off … or someone with a place of business flooded,” he cited.

“Thanks for what you’re doing,” Pease Township Trustee Michael Bianconi said. “They’ve cleaned a lot of creeks up. … This is really a good project, hands-down.”

“All I’ve heard from the public has been positive,” Shaffer said.

Ken Wilson, coordinator of the grant, described operations on the 107 work sites last summer. He said there are about 73 current work sites in six townships.

“We work with the EMA, the township trustees, and actually in Richland Township the road department got involved in helping me get sites, because all the work sites have got to be pre-approved by the state in order for us to do any work in the creeks and streams. Everything in Captina Creek also involves fish and wildlife,” Wilson said. “Because of the bats, we’re not allowed to cut any standing or leaning dead or alive timber.”

He said there are two crew leaders and nine crew members and the work is done manually.

Schlanz commended Wilson and the crews on duty.

“You see these sites, and it’s pretty apparent the issue that’s there,” Commissioner J.P. Dutton said. “All of the debris that built up, you start thinking, ‘If we had a weather incident, what’s going to happen?’ … It’s a fantastic program. You guys are doing really great work.”

Guests included John Drewett of Lashley Hill Road, Shadyside, who asked when work might begin on a road slip dating from the 2018 disaster declaration. The commissioners said they and the county engineer continue to discuss projects to be funded by FEMA.

“In this county, the roads suck,” Drewett said. “They keep building new roads, new bridges. We can’t take care of the ones we have.”