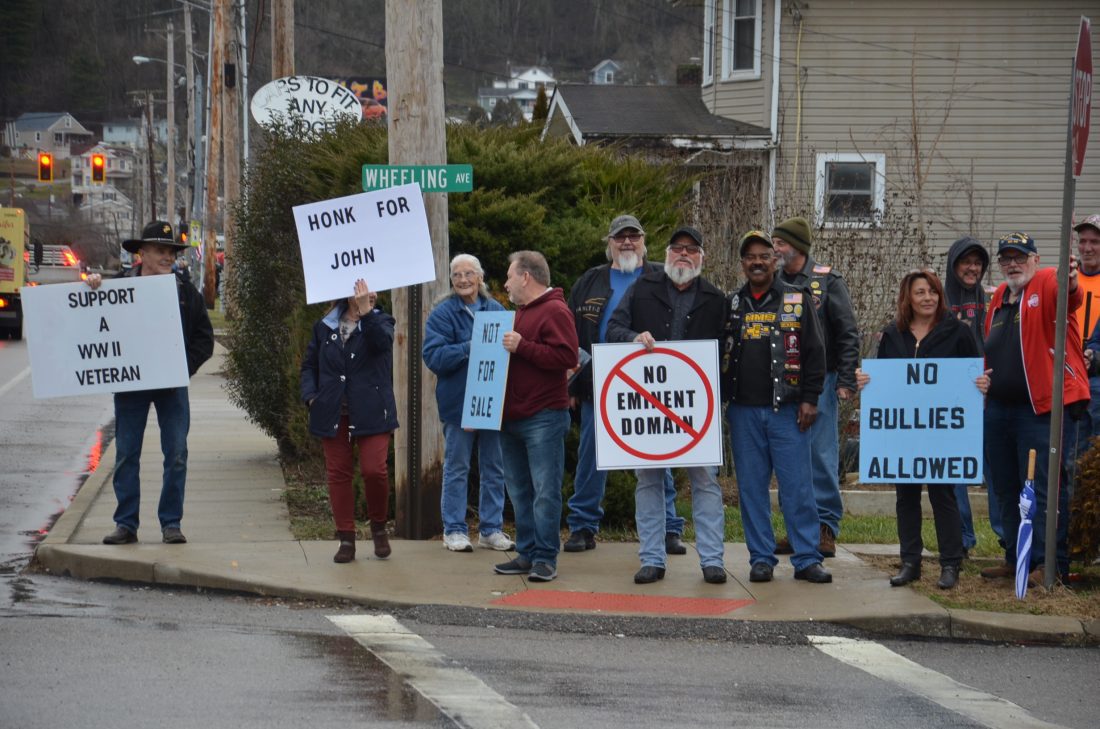 PICKETERS STAND along National Road Tuesday night in support of Bridgeport businessman John Callarik. The Bridgeport Board of Education had previously said it was considering taking Callarik’s property adjacent to the school campus — Chapter Square — by eminent domain to build a new athletic facility that would include a football field, a track, bleacher seating, fieldhouse, concession stands and restroom facilities. T-L Photo/KIM NORTH

BRIDGEPORT — A large delegation of supporters for former village mayor John Callarik gathered outside Bridgeport High School Tuesday, and even more made their way into the school district’s cafetorium for the monthly board of education meeting.

They were there to voice their opinions on the school district’s choice to seek eminent domain on Callarik’s property adjacent to the school campus — Chapter Square — to build a new athletic facility that would include a football field, a track, bleacher seating, fieldhouse, concession stands and restroom facilities.

However, before anyone could speak on the matter, Bridgeport Exempted Village School District Superintendent Brent Ripley gave a PowerPoint presentation on what steps the district is going to take in an effort avoid using eminent domain.

“We are going to continue to re-investigate the possibility of using Perkins Field,” he said, drawing a round of applause from the crowd. “However, any plans submitted would need approval of the local flood plain coordinator, as well as the state of Ohio. Filling in Perkins Field would prove more costly at an estimated cost of $3-4 million.”

Ripley added that the board of education would be presented information about one additional, unnamed piece of property, as well as its cost, during an executive session at the end of the meeting. No action was taken on the matter.

According to Ripley, last week, he, board President Jerry Moore, board member Don Cash and Athletic Director Greg Harkness met with representatives from Kleingers, a civil engineering, surveying and landscape architecture company.

“We will need to do a flood study with Kleingers, the district and the local flood plain coordinator,” Ripley said. “A geotechnical study will need to be completed to ensure the soil is adequate to support the bleachers that are installed. If No. 1 and No. 2 are granted, we will then work towards a proposal for improvements, which will need local and state approval.”

He said no timeline has been established.

“Your overall presentation did answer a lot of questions,” Pat McConnaughy, representing the Bridgeport High School Alumni Association, said. “The only thing I would like to add is that all of that information we heard this evening was condensed, it was precise. That’s the kind of thing we need to get out there to the community.

“This whole situation is a deterent to the school district, the community and the residents,” he added. “Of all these people here tonight concerned, you’ve got 10 times that across the country who are alumni and have their concerns, as well.

“I’m elated to hear that we are going to look at Perkins Field again.”

McConnaughy was one of 11 individuals who took to the podium to voice their opinions. Of that number, nine were opposed to using eminent domain and stated their case.

The nearly 100-year-old grandstands were razed earlier this year after an assessment by M&G Architects of Wheeling revealed extensive damage to several keys areas.