Locks and Dam Fest is touted 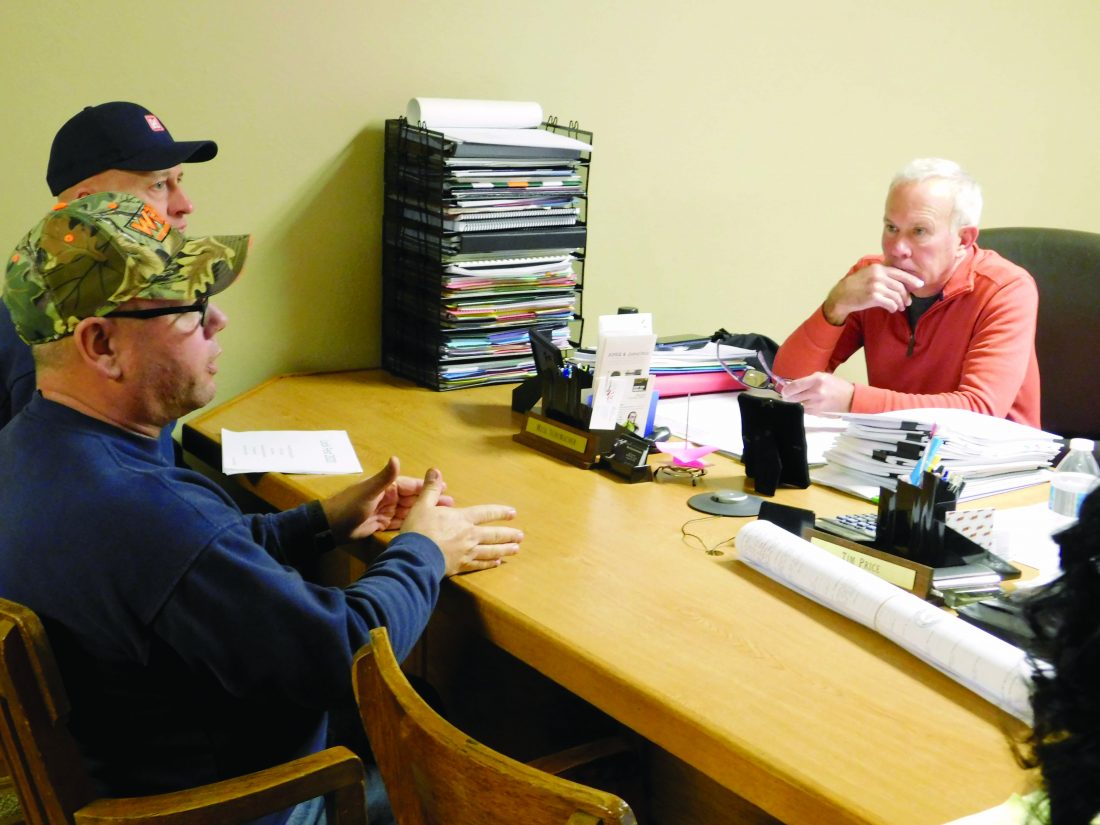 T-L Photo/ROBERT A. DEFRANK Scott Eggar, front, supervisor of Hannibal Locks and Dam, and Bill Crowley, lock and dam operator, discuss the planned lock and dam festival with Monroe County Commissioner Mick Schumacher and other commissioners Monday. The event is scheduled for May.

The facilities are located at Hannibal along Ohio 7, across the Ohio River from New Martinsville in West Virginia. Scott Eggar, supervisor at the locks, and Bill Crowley, lock and dam operator, said they are looking forward to letting the public get a better look at their operations.

“To see what goes on there and what kind of work’s being done, because it is the taxpayers’ money that’s running the facility,” Eggar said. “Basically to get people familiarized with the lock and what it does and why it’s there.”

Eggar said representatives from the Coast Guard, Ohio Department of Natural Resources and other agencies will welcome tourists and take them behind the fence.

“Inside the fence, we’re going to offer the public tours of the lock,” Crowley said. “Outside the fence would be different things like food vendors and fire departments.”

The Ohio State Highway Patrol also is expected to be present and offer demonstrations.

“For the past couple years it’s been held at other locks at the Pittsburgh District.

“This year, Hannibal’s going to host it,” Crowley said.

“We want to get the county involved,” Eggar said, adding Wetzel County also is expected to be involved. “We’d like more participation from Monroe County … any help you guys can give us.”

Eggar said they were reaching out to entities such as sheriff’s departments, emergency management agencies and nonprofit organizations.

Crowley said they also hope to have a car show at a nearby open field.

“We want to draw the public in, and we definitely want the local organizations to benefit,” he added.

“We’d like to involve a local gas and oil company or somebody to set up … an informational booth,” Eggar said.

He added that since the Sept. 11, 2001, terrorist attacks on New York, the Pentagon and rural Pennsylvania, strict background checks have limited their ability to offer tours of the lock. This event will allow two tour groups of 20 people each, while others would enjoy activities outside while they wait.

“There’s a lot more there than just locking boats up and down the river,” Eggar said. “It is a vital part of the economy to keep these locks in running conditions.”

He said possible future developments such as an ethane cracker plant at Dilles Bottom would increase the locks’ traffic. He said the visitor’s center welcomed about 5,000 guests last year.

But Eggar said the primary goal of the festival is to promote water safety.

“I’d like to see people take away boating safety if you are a boater, when you’re around the locks and dams,” he said.

They mentioned an incident in 2017 when two kayakers drowned near Dashields Dam on the Ohio River.

“They don’t realize the dangers around that dam,” Eggar said. “The Corps wants to keep pounding that message into people, and that’s the main reason we want to give the tours — to educate them on what happens.”

“We see boats come up closer to the dam than they should be. Once you’re in that turbulence, there’s no getting out of it. That’s what people need to be educated about,” Crowley said.

Eggar said they hope for a turnout of more than 500 people. If it is successful, the event could become an annual one. Eggar said they are seeking funding and working on plans for 2021 and 2022 to upgrade the 50-year-old facilities.

“The dam, as old as it is, has original machinery, so it’s basically a rehab of both lock chambers,” he said.