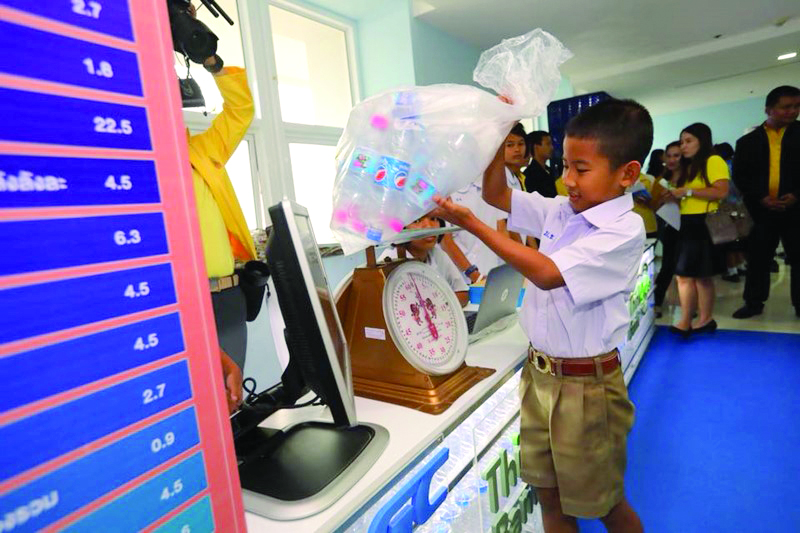 Photo Provided GC, the Thailand-based parent company of PTTGCA, is working with Mahidol University and schools in Rayong on the ThinkCycle Bank project to add economic value to wastes, fostering an awareness to sort and reuse waste according to the circular economy concept. The project features the creation a of waste management network from household to provincial levels. It is one of several environmental initiatives launched by GC. PTTGCA is considering construction of an ethane cracker plant in Belmont County.

DILLES BOTTOM — The companies contemplating construction of an ethane cracker plant in Belmont County say they are committed to doing all they can to address the threats of climate change and the proliferation of single-use plastics.

Dan Williamson, Columbus-based spokesman for PTT Global Chemical and Daelim Industrial Co. LLC, said the companies fully understand these threats to the environment, and are committed to doing their part to help mitigate them. He added that the firms, based in Thailand and South Korea, respectively, are known for calling attention to, and addressing, these issues in their home countries.

“Should we reach a final investiment decision on this project (at Dilles Bottom), we will be every bit as active and outspoken on these issues in the United States as in Asia,” Williamson said.

Williamson said the companies have remained rather quiet on environmental issues in the U.S. and the local region thus far, because they have not yet reached a decision on whether to proceed with the Belmont County project. As the discussion has intensified locally, however, with concerned residents staging protests against the project and meeting with state officials to voice their concerns, PTTDLM decided it was time to become more involved in the conversation.

To that end, Williamson outlined the ways that PTTDLM will demonstrate a committment to protecting the environment if it moves forward with construction of the Belmont County cracker plant, taking steps beyond “what is legally required.” These include:

∫ Assessing all products under research and development with eco-design criteria, such as requiring less feedstock, contributing to greenhouse gas emission reduction, using renewable instead of fossil-based material, and being more easily degradable;

∫ Use of clean fuels to lower sulfur dioxide emissions, ignition of gas-turbine power generators to lower the emission of oxides of nitrogen, and installation of continuous emission monitoring systems;

∫ Refining production processes to minimize pollutant emissions and to optimize use of resources throughout the supply chain;

∫ Selling the byproduct of carbon dioxide to producers of sodium carbonate in order to reduce greenhouse gas emissions while also conforming to circular economy principles by using waste as feedstock;

∫ Collaborating with stakeholders to optimize the reuse of waste.

∫ Establishment of community enterprise waste banks, which also serve as a model for waste management for communities and schools, as well as teaching students about the basics of waste sorting.

∫ Reducing the proportion of nonrenewable resources and increasing the renewable or recycled resources, such as use of plastic fine (particles) from the air treatment system from the polymers plant as raw material in the production process; and

∫ Initiation of an upcycling plastic waste project to transform plastic waste into useful items, such as clothing and bags, and to train people in surrounding communities to produce materials from recycled plastics.

An ethane cracker plant uses heat and chemical processes to “crack” or break down ethane, one of the abundant “wet gas” components of the local natural gas stream drawn from the Utica and Marcellus shales. The resulting product is ethylene, a component of plastics and other products, such as textiles, paint, household cleaners and more. If the PTTDLM plant is constructed, it will use local natural gas to fuel its six furnaces.

“As time goes on, technology improves,” Williamson said, noting that he would expect PTTDLM to upgrade its facility to reduce emissions resulting from the burning of natural gas as the technology to do so becomes available. “Natural gas facilities, including ours, will seek and find new technology so that the emissions we do produce are even less than they are now.”

Williamson also addressed fears that area residents recently expressed about whether the PTTDLM plant would produce “forever chemicals.” According to the U.S. Environmental Protection Agency, per- and polyfluoroalkyl substances, or PFAS, are a group of man-made chemicals that have been manufactured and used in a variety of industries around the globe since the 1940s. Such chemicals are very persistent in the environment and in the human body – they don’t break down and can accumulate over time. The EPA says there is evidence that exposure to PFAS can lead to adverse human health effects.

“We are aware that PFAS are harmful, and the PTTDLM project will not manufacture or use PFAS in the construction or operation of the plant,” Williamson said. “We will work with our contractors and vendors to use PFAS-free products in its construction and operation.”

“The Ohio River is a treasure to the Ohio Valley and to the state of Ohio, and this project will view it as a treasure,” he said, noting that if it is built, the plant will use technology and infrastructure designed to protect and restore the river, local streams and area wetlands. “I think the Ohio River was something that was looked at very closely during the environmental review process. … (Permits) were issued only once it was demonstrated that the water would be protected.”

Williamson commended local residents for their concerns about the environment and the impact that the PTTDLM project or any industrial development might have on it.

“The people who are speaking out are doing so because they care about their community,” he said. “They have lost faith in government and maybe in industry. They don’t know, and they have no reason to know, the character of these companies they are not familiar with.”

Williamson said in Thailand and South Korea, PTT and Daelim “don’t just answer questions when they are pressed,” but they also hold events to address such issues that are important to them.

“They lead the conversation,” he said.

One example of the environmental initiatives begun by GC, PTT’s Thailand-based parent company, is the “ThinkCycle Bank” project, designed to add economic value to wastes by fostering an awareness to sort and reuse waste. GC also has launched a project called “Upcycling the Oceans, Thailand.” It uses plastic waste found in the sea and on the coastlines of Rayong, Thailand, to produce T-shirts and backpacks. Those “Trashion” products feature slogans such as “Trash to Treasure” and “Wear Your Own Waste.” According to GC program information, each shirt or backpack is made by collecting and recycling 14 plastic beverage bottles.

And while Williamson said the companies are committed to such upcycling projects and to reducing production of single-use plastics such as beverage containers and grocery bags, he pointed out that there are still good uses for plastics. He cited the need for sterile medical equipment and supplies as well for automobile components that make vehicles more lightweight and efficient as two examples.

“PTTDLM shares this concern and embraces the responsibility to be part of the solution,” he said. “We are committed to raising awareness and supporting policies to reduce single-use plastics.”