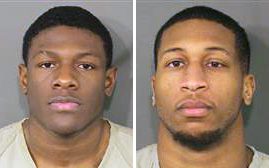 COLUMBUS, Ohio (AP) — Two Ohio State University football players were kicked off the team Wednesday after being charged with rape and kidnapping.

Defensive backs Amir Riep and Jahsen Wint, both 21, were booked into jail earlier in the day after they were charged with sexually assaulting a woman on Feb. 4 at the players’ shared apartment.

“I am not making any statement on the criminal charges, but it is clear they did not live up to our standards and my expectations,” coach Ryan Day said in a statement. “The athletics department will make sure they both continue to have access to the health and well-being resources available to students and student-athletes.”

Day said he would not comment further on the case.

The men were scheduled to be arraigned Thursday morning. It was not immediately clear whether they had attorneys.

The woman told police that she was having consensual sex with Riep before Wint came into the room and both forced her to have sex.

“We are aware that two of our students have been arrested and criminally charged,” Ohio State spokesman Ben Johnson said in a statement.

Riep is a 6-foot-1, 185-pound cornerback entering his senior season for Ohio State, while Wint is a 6-foot, 198-pound redshirt senior safety.

Riep was expected to compete for a starting job after the departures of Damon Arnette and Jeff Okudah. Wint, who got more playing time in 2018 than last season, would have been in the mix at strong safety.

The charges were a blow to a program that has avoided major off-the-field trouble as Day begins his second year at the helm. Last season, All-American defensive end Chase Young was suspended for two games after it came to light that he had accepted a personal loan in violation of NCAA rules.

Ohio State was 13-1 last season, its only loss against Clemson in a College Football Playoff semifinal. Spring practice starts March 2, and the Buckeyes open the 2020 season at home Sept. 5 against Bowling Green.