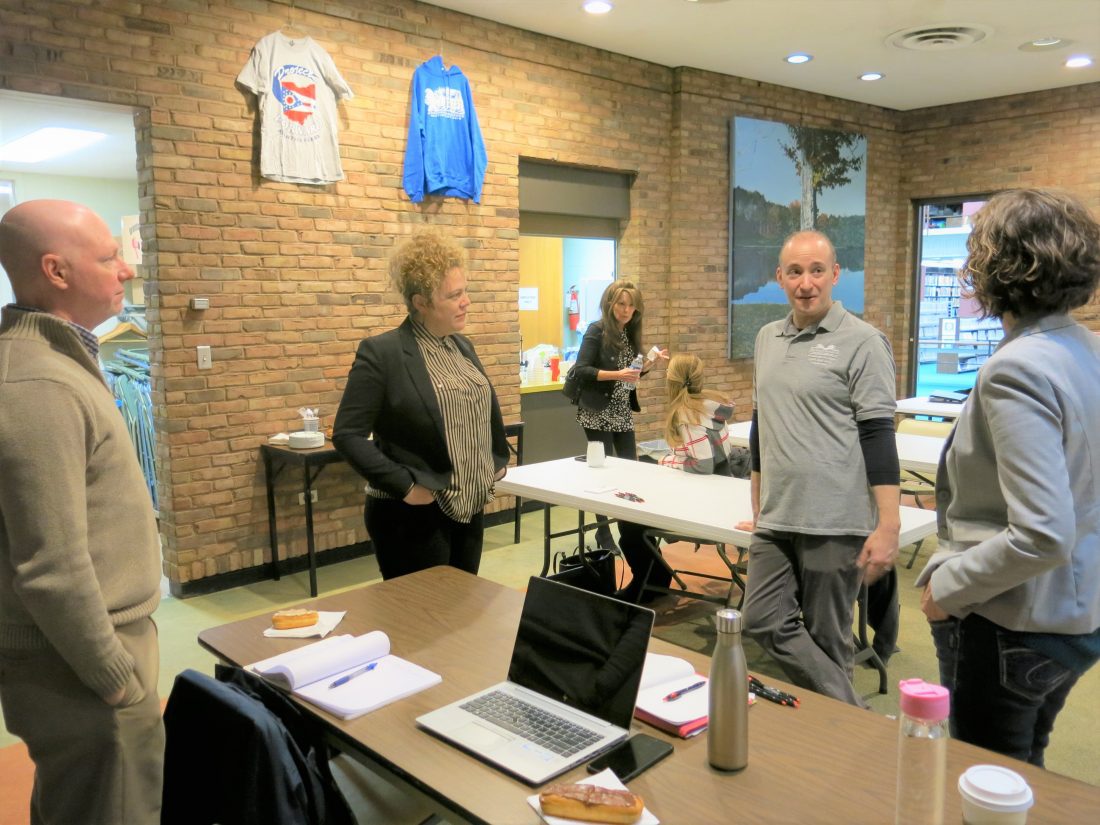 MARTINS FERRY — Project Forward and other officials met Friday with Heritage Ohio and Main Street America to learn about a new three-year program aimed at spurring entrepreneurship in Martins Ferry.

The day-long affair started with a meeting of representatives from all three groups, in addition to Ohio Rep. Jack Cera, D-Bellaire; Phil Wallace, business owner and former city mayor; and Lolly Ravak, loan representative with Ohio Mid-Eastern Governments Association. The meeting was held at the Martins Ferry Public Library.

After learning more about the city and its assets, the group toured the city. Additional meetings were held later with other stakeholders in the community including county, tourism and civic leaders.

The Project Forward group, formed in an effort to aid recovery from a 2016 fire that destroyed several buildings and businesses in the city’s downtown, will receive $39,000 in grant money from Heritage Ohio and Main Street America over a three-year period. The grant money is being given to Project Forward for “organizational support.”

“That funding will go toward the organization for personnel, dues and being part of Heritage Ohio’s network. That funding can help kickstart some of that network-building and basic personnel support. … It’s not as much as we’d like it to be, but hopefully it’s enough of a chunk to kickstart some movement there,” said Lindsey Wallace, director of Strategic Projects and Design Services at Main Street America.

The grant funding was made possible by the Kaufmann Foundation and Brookings Institute.

Matt Wagner, vice president of Revitalization Programs at Main Street Center, said there will also be other funding that will support technical assistance, such as market analysis. Wagner also explained the ultimate goal of the project.

“The world doesn’t really work like that anymore. If we sort of sit around with that kind of mindset, you can be sitting for a really long time. And especially in economies that are transforming from extraction-based, to energy-based, to (agriculture-based), to manufacturing-based, there is transition happening. Traditionally the jobs that were in those sectors — very high-paying, very good jobs — and as efficiencies and technologies change in that, maybe some of that has gone away, but our mindset is still, ‘I am looking for that job,’ which is great and fantastic, but we also need a mindset that says, ‘I’m going to create jobs and I can be a creator of jobs.’

“A big part of this is around the mindset and culture shift and how we think of entrepreneurships, and the creating of a pipeline or funnel of entrepreneurs that can be the next generation of those manufacturing, or whatever it happens to be, to support the local economy. It’s not going to be hundreds and hundreds (of jobs), it’s going to be hundreds and hundreds of entrepreneurs that start to employ one, two, five (people). It’s a different system of economy, and what that takes is a lot of people working cooperatively together. It’s not going to be just Main Street, but a lot of people aligning resources to make that happen,” he continued.

“The end goal is frankly to build that support system where entrepreneurs can be launched, supported, cultivated, grow, scale and be sustainable here.”

Heritage Ohio is expected to help the city receive a historical designation.

In addition to Martins Ferry, two other Ohio communities are participating in what Wagner described as a “pilot project” — Cambridge and Coshocton. It was noted the entire project would last three years and include several more site visits, market analysis of assets, development of strategies and training with the two other cities. Main Street America also will use its data for its research regarding rural development.