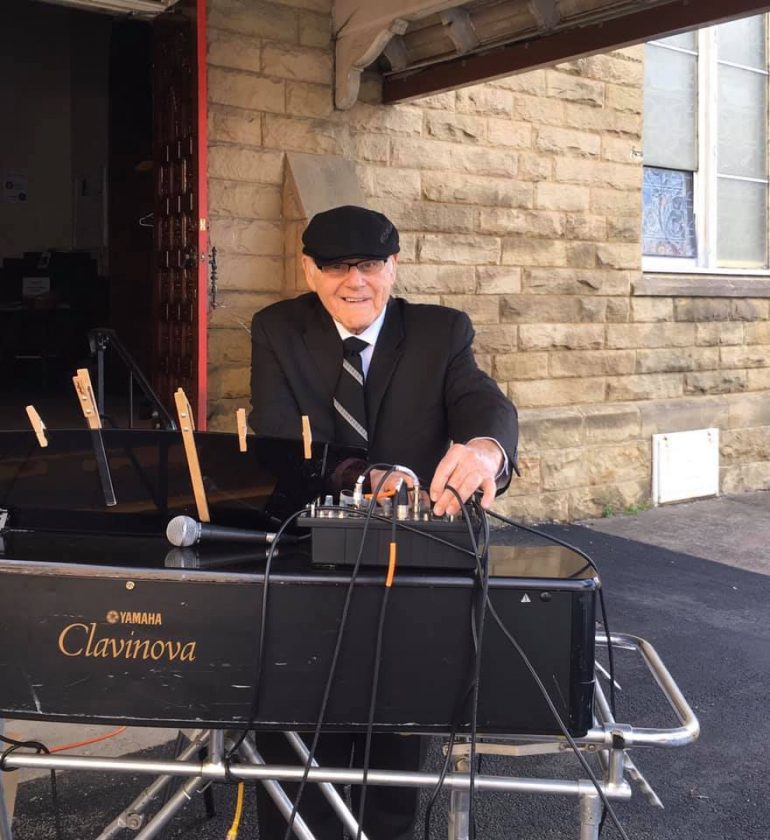 Millard Neal, music director for First Presbyterian Church in St. Clairsville, provides music for a service Sunday that was broadcast via FM radio to congregants in their cars in the church parking lot.

ST. CLAIRSVILLE — As America huddles in virtual isolation cornered by a nearly invisible enemy, the fellowship of church worship services has been hard hit. But a St. Clairsville church has decided to fight the invisible with the invisible.

Last Sunday, First Presbyterian Church of St. Clairsville broadcast a full service via low-power FM radio from the rear steps into the parking lot, where the parishioners remained in their vehicles tuned to an FM frequency.

The idea for the broadcast came to Pastor Kenn Sickle from his wife, Cheryl, who had been reminiscing about a gift their daughter, Mallory, had gotten for her father one Christmas.

“(Pastor) Kenn likes technical gadgetry, and also music,” Cheryl Sickle said. “Mallory bought him a small FM transmitter so he could listen to his favorite music anywhere in the house.”

From that conversation bigger ideas grew as the church wrestled with the hollow realization of not having church services through the Holy Season because of the COVID-19 pandemic. Pastor Sickle researched the limits of license-free FM broadcasting and found that the limit was 150 feet.

“At that point,” he said “I paced off our parking lot and found that it was about 150 feet. Some will say it’s coincidence; I prefer ‘it’s providential.’ So I bought a transmitter that would do the maximum.

“We had about 27 or so cars with varying numbers of passengers,” Sickle continued. “And people honked in places they’d normally say ‘Amen.'”

The day wasn’t without its problems: high winds made tethering the canopy tent for the pulpit a challenge. The tent actually buckled during one big gust and bent the frame, but it was quickly re-secured and bent back into shape.

The tent held up until the last note of the postlude before crumbling in another gust.

“That in itself was a miracle,” the pastor said.

Plans immediately began for the Palm Sunday service that the church hopes will run even more smoothly this weekend.

The church, located at 110 S. Marietta St. in St. Clairsville, invited its neighbor, Calvary Presbyterian, to join together in the radio-based worship on Sunday, April 5. That service will begin at 11 a.m., and Pastor Sickle said everyone is invited to participate.

“I’d like to thank our music director, Dr. Millard Neal, for his hard work in making music happen for the broadcast,” Sickle added. “He was a real problem-solver in making this happen. My son Larry engineered the rigging for the tent; scripture readers William Pollock and Darcy Porterfield, and soloist Lucien Murzyn were real troopers. This church has displayed a remarkable resolve to worship God despite our present challenges.”