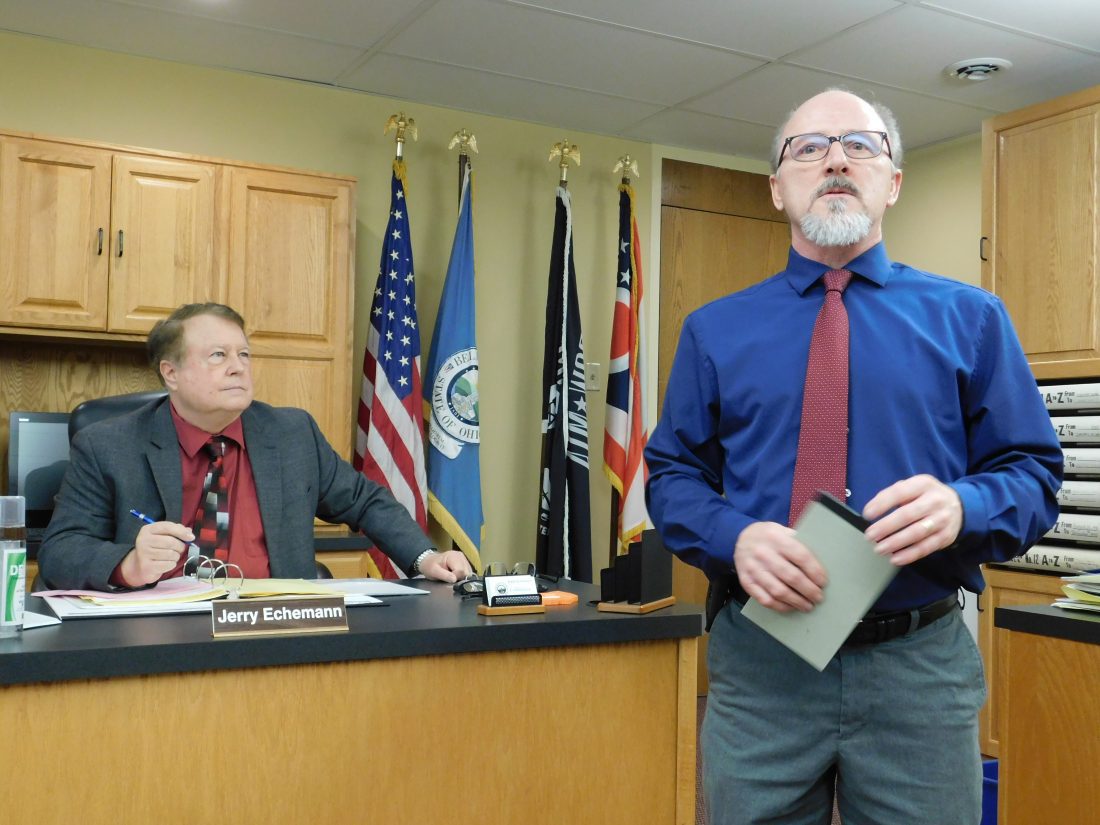 ST. CLAIRSVILLE — The Belmont County Board of Commissioners posed questions Wednesday to Deputy Health Director Robert Sproul when he reported on the continuing impact of COVID-19 on the county.

They asked about the potential usefulness of East Ohio Regional Hospital in Martins Ferry, which closed in September.

“The state has been looking at all resources … in anticipation, if we would have a medical surge,” Sproul said, adding he visited EORH last week to review its capabilities. “If it could be used and if they needed to use it, it was available. The state is also monitoring the number of hospital beds and resources.”

“We hope it doesn’t get to that point where the local medical facilities are at a maximum capacity where a temporary facility will be looked at, but obviously here in Belmont County because of unfortunate events of the past year … we have an asset that is in Belmont County that can be utilized in that scenario,” Commissioner J.P. Dutton said.

“There’s a lot of value in that building they can use, and they’re aware of that,” Sproul said, adding any decision on the facility would be made by state officials.

“We’re needing additional health care services prior to the pandemic,” Dutton said, adding that the commissioners are continuing talks with the city of Martins Ferry and the state.

Regarding the illness itself, Sproul said as of Tuesday a total of 221 tests had been performed on Belmont County residents.

“We currently sit at 11 positive. We had a positive late (Tuesday) night, so we still have to do all the particulars on it today,” he said, noting the newest case is a man in his 50s.

In addition, a test came back positive for an individual in their 80s who recently was hospitalized with their spouse, who had previously tested positive. They are a married man and woman.

“Of that 11, we have seven that have already completed their quarantine and are to be released,” Sproul said.

Sproul declined to speculate how many cases might occur in Belmont County, but he said the number is expected to increase.

In answer to questions from Commissioner Jerry Echemann, Sproul said officials could not identify areas of the county where those diagnosed with the novel coronavirus reside. He also said most of those testing positive traveled outside the county and were infected elsewhere.

“We’re still getting reports of people coming back from Florida. They come down there for the winter,” he said. “You’re seeing reports of New York of people leaving New York and heading for Florida.”

“They’re doing their due diligence. When anybody calls us about testing, tell them to contact their physician and contact the hospital before they go to let them know they’re coming. We don’t want people just showing up, thinking they have it, walking in the ER trying to get tested. They know to call so the hospital’s prepared for that,” Sproul said.

In answer to Commissioner J.P. Dutton, Sproul said area hospitals are in communication with each other about numbers of beds and staff.

“If one has an issue, the others can help them out,” Sproul said. “It’s been a very coordinated effort.”

In other matters, the commissioners moved to allow employees to be placed on paid administrative leave in the interest of limiting staffing in county offices. Dutton said this will allow more flexibility as departments adjust staffing levels during the pandemic.