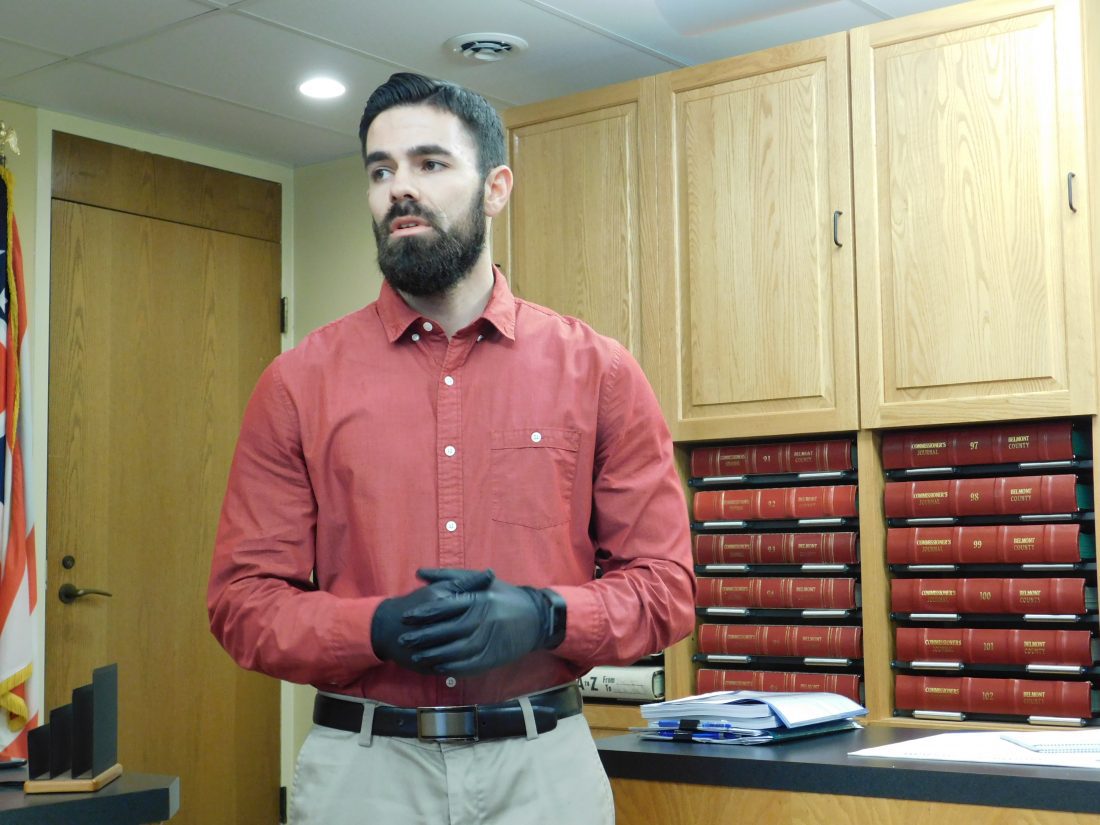 T-L Photo/ROBERT A. DEFRANK Belmont County Auditor Anthony Rocchio wears a pair of gloves Wednesday while addressing the county commissioners about the possible economic impact of COVID-19. He said a decrease in sales tax revenue must be taken into account when forming a budget for 2021.

He said it will likely be May before the county begins to calculate the economic losses caused by the closure of restaurants and businesses and orders from the state for people to remain in their homes.

Rocchio said sales tax receipts have decreased compared to last year, which already had declined from the year before. In recent years, some big-box businesses at the Ohio Valley Mall have closed and the Jamboree In The Hills country music festival ceased to opperate.

“Our grocery stores are obviously doing well,” he added.

He said he hopes business and activities return to normal once Gov. Mike DeWine takes stock of the pandemic situation in May. Rocchio said many residents are patronizing local restaurants that offer curbside service.

“I think as citizens, we have to do the best that we can,” he said.

Meanwhile, county offices will be asked to be frugal as they prepare budget requests for next year.

“Our budget season is kicking off. We’re sending out … letters and forms to all of the department heads to give us a rundown of how they think the year is going to go compared to the previous year,” he said. “We’re going to revamp the cover letter a little bit, just to talk about the COVID-19 situation that we’re in, obviously with a lot of government funds being down.”

Rocchio said department heads would be advised to curb any non-essential spending and hold off on new hires, as well as using any rollover funds from last year if possible.

The departments have seen cuts in their budgets this year. In January, commissioners established the budget for 2020, pointing out that while funds were holding steady, increasing expenses meant cuts for the majority of departments including the commissioners’ office.

Rocchio mentioned revenue from state casinos as one example of a reduced source of income in the face of COVID-19. He said decreases in sales tax are also expected.

“We’ll prepare our departments for a worst-case scenario,” he said.

Commissioner J.P. Dutton said sales tax losses from March do not reflect the losses of a full month.

“We don’t even have March’s (sales tax) yet,” Rocchio said. “That’s not going to be a full indicator. The whole month of April’s going to be shut down.”

Rocchio also mentioned the impact on townships, as well as a possible lack of local government funding. He expressed concerns that closures might increase through May.

“We don’t know that things will get up and running again for the purposes of sales tax,” Commissioner Jerry Echemann said, adding much will depend on whether people will frequent local businesses after they are reopened. Echemann said he was optimistic. “When the restaurants and the stores open up, I think there’ll be a real zeal for that. I hope so.”

Rocchio said there is no data to compare to determine if there could be a slow or fast return to patronage of local businesses.

“There’s never been anything like this before,” Rocchio said.

“This was something that was on all of our minds,” Dutton said, referring to advisories to stay at home. “The sales tax is such a big part of what funds our operations and the general fund of Belmont County. For the last few weeks we’ve really focused on county operations.”

“It will have an impact potentially on next year’s budget, but also it could have impact on this year’s budget. People are going to have to be very mindful of how their budgets are operating between now and the end of the year, or until we have a better sense of what the real, true impact is going to be, financially,” Rocchio said.