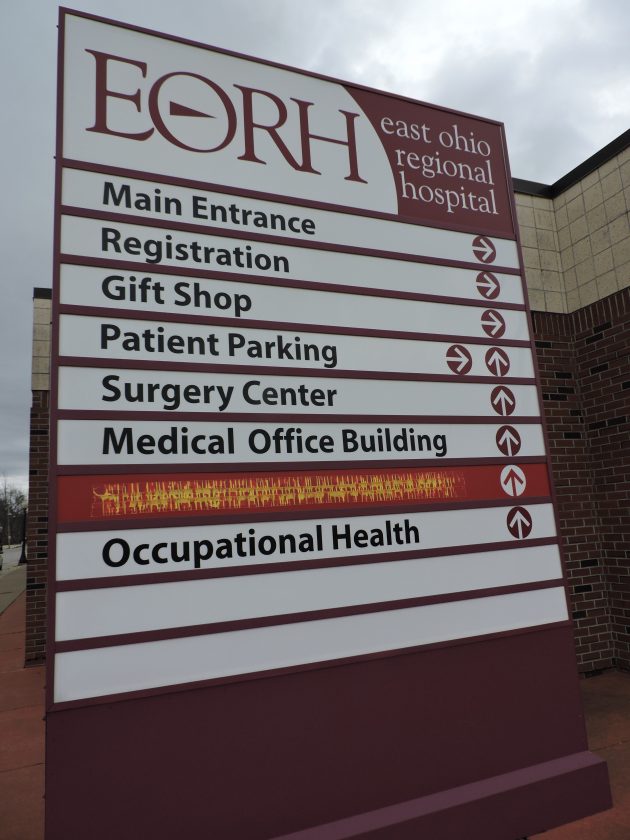 T-L Photo/SHELLEY HANSON THE CITY of Martins Ferry has started a petition to get East Ohio Regional Hospital reopened.

MARTINS FERRY — Mayor John Davies believes he has exhausted just about every avenue when it comes to trying to get East Ohio Regional Hospital reopened during the coronavirus pandemic and beyond — but no one seems to be paying attention, he said Wednesday.

Now Davies is starting an online petition that he hopes will wake up local, state and federal elected leaders to not just Martins Ferry’s plight, but to that of the Ohio Valley as well.

“We are the people and we will be heard and we need your help,” Davies said in a recent social media post. “It is an election year and if these politicians are not willing to help with our hospital it’s time they go. … This is an Ohio Valley fight not a Martins Ferry fight; please share and join in our fight for all hospitals not just EORH. Your life or one of your loved one’s life may depend on it.”

The online petition can be found at www.change.org under the title “Reopen East Ohio Regional Hospital.”

“We tried local officials first, and I didn’t think we had satisfactory answers there. We contacted state officials and when it seemed to get bogged down there, we contacted federal people. That’s where we are at today,” he noted Wednesday.

“This petition is to reopen East Ohio Regional Hospital. EORH has been in the ‘Ohio Valley’ since 1906, it’s a 140 bed health care facility. The re-opening will open at least the 400 jobs that were lost in Belmont County if not more. During this pandemic it is now more important than ever to open a Hospital that served the Ohio Valley for over 100 years. Currently Barnesville Hospital is the only hospital in Belmont County and is only a 24 bed care facility. Belmont County population is 70,000 plus justifies the need for EORH hospital. Area hospitals are so over crowded we could use this now during these critical times more than ever. Please sign this petition that will go to Local, State and Federal Politicians to help in the fight to open East Ohio Regional Hospital.”

The petition plea is signed by the city of Martins Ferry and Davies.

More than 1,700 people had signed the petition as of Thursday afternoon.

During the Belmont County Board of Commissioners meeting this week, Deputy Health Commissioner Rob Sproul informed commissioners that he and state officials had toured EORH last week to determine if EORH can be used as an emergency place to treat coronavirus patients.

“There’s a lot of value in that building they can use, and they’re aware of that,” Sproul told commissioners, adding any decision on the facility would be made by state officials.