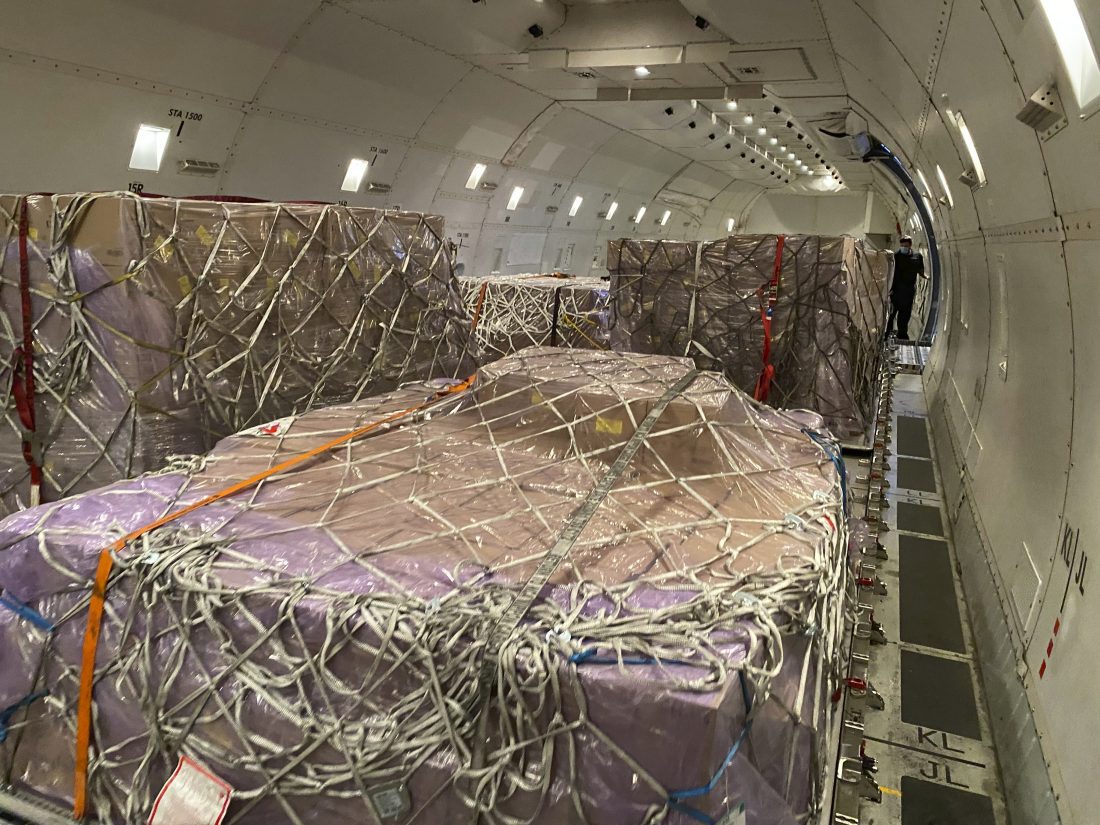 In this image provided by the Columbus Regional Airport Authority, the interior of cargo plane loaded with a shipment of critical medical supplies before it is unloaded at Rickenbacker International Airport, Thursday, April 2, 2020 in Columbus, Ohio. The shipment is part of a joint effort between FEMA and the U.S. Department of Health and Human Services to connect private sector suppliers with healthcare end-users in response to the coronavirus crisis. (Sarah McQuaide/Columbus Regional Airport Authority via AP)

A look at coronavirus-related developments in Ohio on Thursday:

Gov. Mike DeWine said the extension of the stay-at-home order, which takes effect Monday, requires retail businesses to set a specific number of people allowed in stores at a time, and creates a board to resolve disputes when similar businesses feel they’ve been treated differently county by county.

Messages seeking comment were left with the company Wednesday and Thursday.

In Medina in northeastern Ohio, dozens of cars lined up before dawn as 1,000 food boxes were distributed through the Akron-Canton Regional Foodbank, according to WEWS-TV.

At Rickenbacker International Airport in Columbus, a cargo plane from Shanghai, China, delivered 83 metric tons of personal protective equipment, including gloves, gowns, goggles, masks and hand sanitizer. The shipment, coordinated through the Federal Emergency Management Agency and the U.S. Department of Health and Human Services, was not staying in Ohio but was bound for medical distributors in areas of greatest need, then to U.S. hospitals, health care facilities and nursing homes, according to the Columbus Regional Airport Authority.

More than 2,900 Ohio cases are confirmed, with 81 deaths as of Thursday and more than 800 people hospitalized, officials reported. That doesn’t reflect all cases in Ohio, because the state limits testing to those who are hospitalized and to health care workers.

In Alliance, Kimberly Holbrook said a memorial service will have to wait for safer times following the March 28 death of her husband, Jeffrey Holbrook, 55, from COVID-19, according to The Repository. Kimberly Holbrook urged people to take the coronavirus seriously.

At ManorCare nursing home in Parma in suburban Cleveland, five patients and nine employees have tested positive for Covid-19, cleveland.com reported. In Miami County in southwestern Ohio, health officials are looking into whether an infected health care worker inadvertently helped spread an outbreak that began in mid-March and has killed six residents and infected close to 50 people at two nursing homes.

For most people, COVID-19 displays mild or moderate symptoms, such as fever and cough that clear up in two to three weeks. For some, especially older adults and people with existing health problems, it can be more severe, causing pneumonia or death.

Yost appealed a federal judge’s Monday order that found unconstitutional the state’s temporary ban on elective surgeries if it prohibits abortions from being carried out.

In Ohio’s Amish country, Amish women and their families are sewing N-95 mask covers, gowns and boot covers, bound for health care workers in Ohio, Kentucky, Michigan, Missouri and New Jersey, according to The Columbus Dispatch.

Yost has ordered Ohio’s police officer training academy to speed up the final examinations of about 300 cadets to allow them to hit the streets faster. He’s also working with local law enforcement agencies to help allow recently retired officers to return.