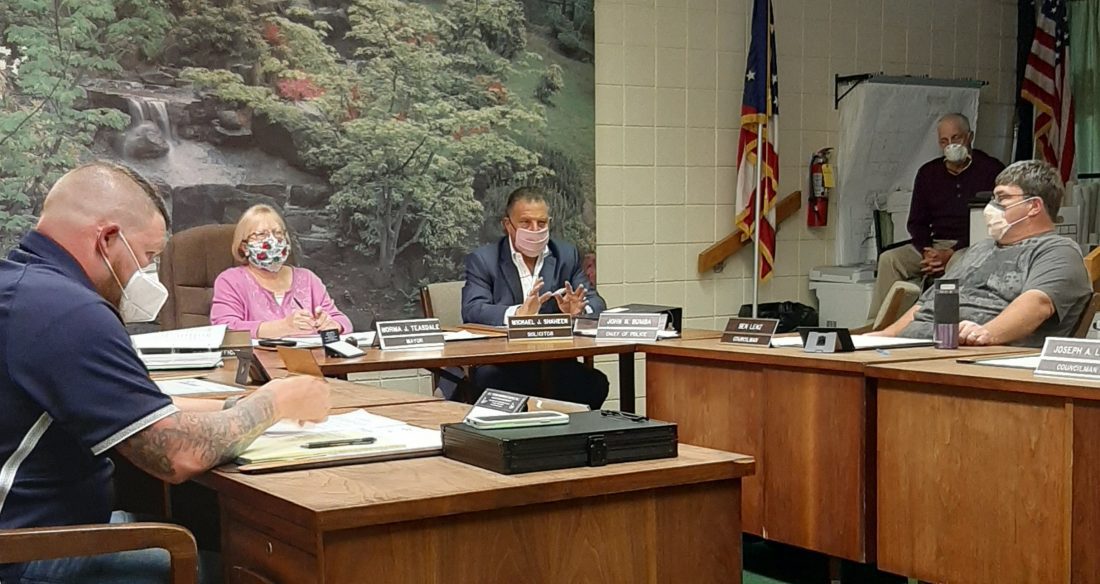 BRIDGEPORT — Although the village of Bridgeport has limited funding, officials are working to patch the larger potholes throughout the village.

Bridgeport Village Council briefly discussed the matter during Tuesday’s regularly scheduled meeting. Council met in its chambers for the first time since late March, with safety protocols in place.

All meeting attendees were required to have their temperature taken, don a facial covering and practice social distancing.

Councilman Joseph Lyle on Tuesday said the street department has been contacted by numerous residents who have reported problems with the local roadways.

“We’ve been trying to answer all the calls that have been coming in about the streets. … What they (residents) want and what we can do is two different stories,” he said. “Everybody wants their street paved and the holes patched. We just don’t have the money or we’re just not allowed to do it.”

Despite being unable to pave many of the roads at this time, acting Mayor Norma Teasdale said crews are working to patch many of the larger potholes throughout the village, weather permitting. Some already have been patched while others are in the works, she said.

“The one on (U.S.) 250, the one in front of Wilson’s (Furniture Store on Lincoln Avenue), the one by the post office (Lincoln Avenue), those were patched. Also, the one on Minellen Drive. There was a large hole there that also got patched. I know there are a lot of other holes but like Mr. Lyle said, we have to patch the larger ones and do the best we can,” she said.

Teasdale said they are attempting to get as many holes patched as possible.

In other news, village resident David Holmes of Kirkwood Heights requested council approve a variance in an ordinance that would allow him to raise livestock in village limits. He also proposed a second option, a possible annexation of a portion of his property to join Pease Township, which does not have livestock restrictions.

“The portion of the livestock is to just have the ability to raise swine, goats, horses and chickens,” Holmes said, noting that he and his family would like to raise livestock on their property for noncommercial purposes only.

Toward the end of the meeting, council went into an executive session citing a need to discuss personnel.

After reconvening the regular session, Shaheen told Holmes that he should first discuss the possibility of annexing a portion of his property to Pease Township with the township trustees.

“I believe the first step is you reaching out to the (Peases Township) trustees. … You have to make sure that Pease (Township) would be willing to agree,” Shaheen said.

Holmes asked if that would be the best option, rather than a variance to the current village ordinance.

“I don’t know if the decision’s been made, but there’s pros and cons to both,” Shaheen said.

Holmes agreed to speak to the trustees and will contact council afterward to discuss the matter further.