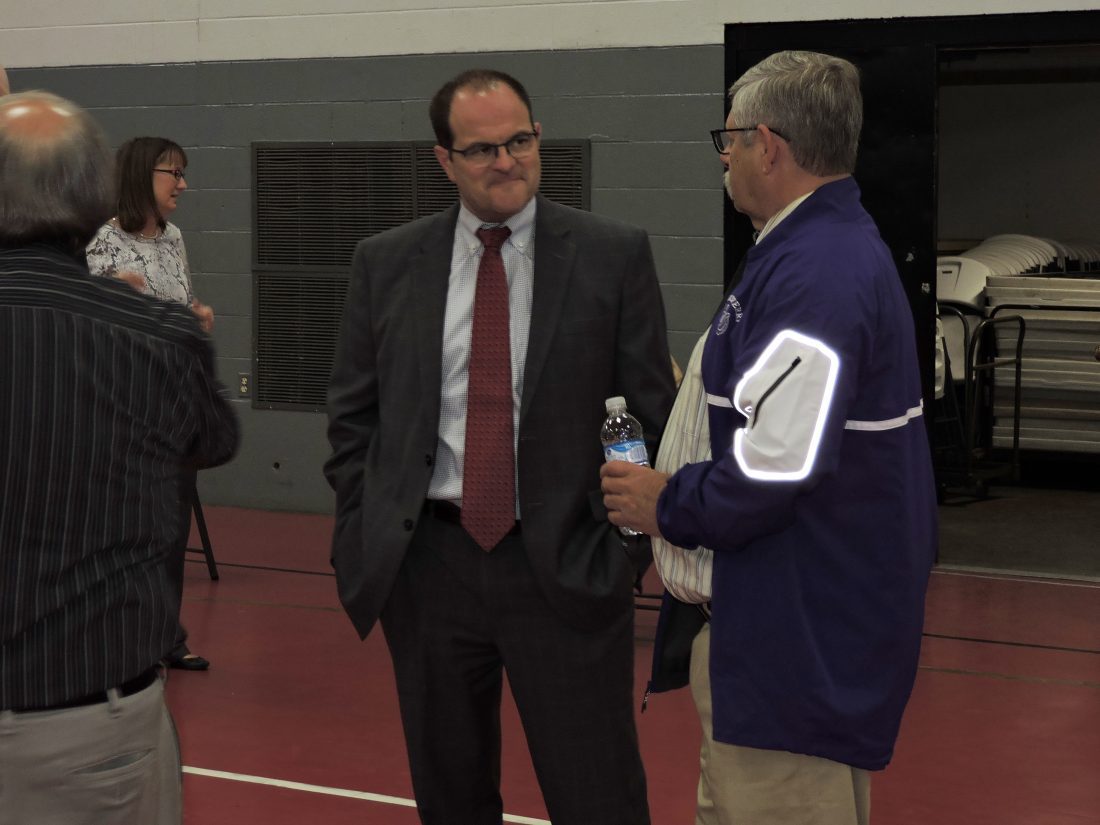 MARTINS FERRY — City leaders and some former East Ohio Regional Hospital employees say they are excited the facility has been purchased — and they are looking forward to it reopening since its closure nine months ago.

On May 17, it was announced that EORH had been purchased by Dr. John Johnson and East Ohio Hospital LLC.

The Dayton-based psychiatrist said in a statement he plans to reopen it as a working hospital.

Tiltonsville resident Eva West, who worked at the pharmacy at EORH before it closed last fall, said she was employed there for a total of 40 years. She said when it was shuttered by California-based Alecto Healthcare Services it was “the saddest day ever.”

“It was my home away from home; I loved it there. … I was so happy to hear that someone bought it. I think this is going to be a really good thing,” West said of the purchase. “The community needs this. Everybody needs this. I think the company that bought it is a good company, and I think they really mean to take care of our little hospital. I would love to go back to work there, but unfortunately I’m heading towards my retirement; if I went back I would definitely work in the pharmacy — that was my family.”

West believes there will be many former employees who will want to work there again.

“I don’t think they’ll ever have a problem staffing the place. We had so many good nurses, and everybody there was wonderful,” she said, adding she is looking forward to using the new facility.

Martins Ferry resident Jim Howard, a former EORH employee, said he is hoping it will reopen as a fully functioning hospital again. Though he found employment at another facility after EORH closed, he would be interested in going back.

“If it looks solid, I would at least apply,” he said.

Howard said he is an anesthesia technician.

“We’re quite excited … I think if you polled all former employees, 75 percent of them would come back in a heartbeat,” he said. “It’s a big miracle.”

Martins Ferry City Council President Kristine Davis said she is happy the hospital has been purchased, but she is also “cautiously optimistic” about its future.

“I wish them the best. I can’t wait to see them open. The jobs it could provide and opportunities it could provide when it opens are huge and more than just at the hospital itself,” Davis said. “Hopefully ancillary businesses will look us over again and take a shot at opening around here, and providing some services.”

Davis said the city will provide financial help “within reason.”

“We still have to be fiscally responsible. We can help where it’s feasible for the city and for our budget, too,” she said.

Davis noted as the one-year anniversary of the closure was coming closer (September), the hope of a buyer was growing more dim.

“Once you hit that year point the chances of a sale decrease significantly because the building has sat empty and unused. The value goes down. … The mayor and council and the administration, we did everything we could think of. Mayor Davies was tireless … he was obsessed with getting a buyer or at least to get someone interested,” Davis said, pointing out the deal was still done between two private companies.

“We tried to do what we could by providing any incentives and contacts in government. … He worked hard,” she said of Davies.

Davis noted the opening will not happen overnight, though many would like it to.

“It will take a long time to build this. (Chief Operating Office Bernie Albertini) will work really hard. He’s got something to prove like we all do,” Davis said. “I’m really excited and I hope everything goes through. It appears to be heading in the right direction. I can’t wait to see it open.”

Councilman Tom Burns said he is excited about the plans for EORH. He hopes at the very least the facility’s emergency room is up and running as soon as possible, even if the hospital is not prepared to admit patients. Those who need additional care could still be transported to other local hospitals in the meantime, he said.

“That’s my biggest concern,” Burns said of not having an ER.

Burns said he hopes the new EORH can sustain itself, but many of the patients locally are on Medicare and Medicaid and such insurance does not reimburse as much as many hospitals want. More patients with private insurance will be needed, he believes, to make up the difference.

Councilman Jim Schramm also was happy to learn the news.

“It’s a wonderful thing. We needed it. I hope they get it up and running before the first of the year,” Schramm said. “God bless Mr. Johnson.”

Councilwoman Suzanne Armstrong also was happy about the purchase. She is hoping the Belmont County Board of Commissioners will help the hospital financially in some way also.

“Obviously I was thrilled to death,” Armstrong said of hearing the news. “I wasn’t aware of how close they were to completing the deal. … I certainly was hoping. It was concerning the longer time went on.”

Armstrong said she was also happy to learn that Albertini was hired to be the facility’s COO. She said many years ago at a different facility she worked with him when he was a pharmacist and she a nurse anesthetist.

“I’m glad all the effort has come to fruition,” he said. “There is a light at the end of the tunnel. … I want to thank everyone for their hard work that got us to where we are now.”

Councilman Robert Hunker said the hospital’s purchase and anticipated reopening should be “a shot in the arm for the city.”

“Hopefully they have more people than before and it will be full-scale,” Hunker said. “The facility is needed. … We need more than just Wheeling Hospital and Glen Dale. All you have to do is look around and see it. We need it and an ER bad. We don’t want our e-squads fighting traffic over in Wheeling.”

Hunker said he hopes EORH will offer surgical services again along with labs and X-rays.

“That means a lot to the seniors,” he noted.

Councilman Bruce Shrodes also was happy with the purchase, noting the city is “more than willing to work with them.” City Council is expected to soon consider an ordinance that will call for giving 75 percent of the 1 percent income tax revenue generated by future employees of the hospital back to EORH. This would last for 10 years. The city also may give other breaks, such as on utilities, to help sustain the facility, which its owner says will be needed.

“A lot of hard work was done by a lot of people,” he said. “I hope they can keep it open so we can protect our public. I’m in favor of helping in any way we can. We want our ER back — that’s what makes people feel safer.”

Mayor John Davies and other officials on May 18 stood beside a pile of rocks with a sign stuck in the middle that read “keep on praying” at the EORH parking lot. Davies’ press conference was held a day after the initial announcement from Johnson. During it he thanked everyone for their work in brainstorming for ideas to help EORH.

“I came here every day and prayed,” Davies said of the rock pile.

During a prayer ceremony held in August 2019 to keep EORH open, led by the Rev. William Webster, pastor of Grace Presbyterian Church, the rocks were symbolically struck with a sledge hammer. Webster said breaking the rocks represented prayer chipping away at the problem.