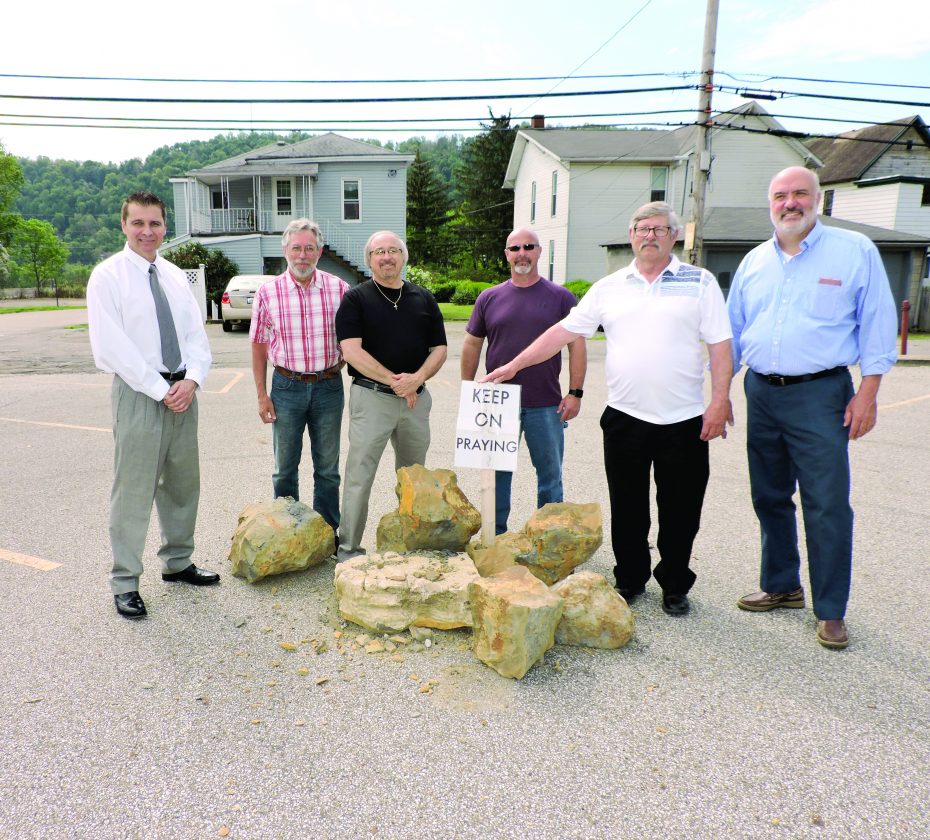 T-L Photo/SHELLEY HANSON MARTINS FERRY city leaders and other officials stand near the prayer rocks at one of the East Ohio Regional Hospital parking lots Monday morning during a press conference held there. From left are Vince Gianangeli, the Rev. William Webster, Service Director Andy Sutak, Water Superintendent Bill Suto, Mayor John Davies and Pease Township Trustee Mike Bianconi. The sign in the middle of the rocks that Davies is touching says “keep on praying.”

MARTINS FERRY — It appears the prayers said near a group of large rocks outside the shuttered East Ohio Regional Hospital were finally answered.

During a short press conference held Monday alongside those stones, Martins Ferry Mayor John Davies talked about the news released Sunday that EORH has been purchased by East Ohio Hospital LLC.

According to a statement released Sunday by Morgantown lawyer Michael S. Garrison of the firm Spilman, Thomas and Battle, the LLC plans to reopen the hospital as a healthcare facility by year’s end.

Davies said he wanted to let people know the city plans to offer temporary tax incentives and utility breaks to the hospital to help it reopen and stay open. The details will be determined at a later date, but Davies said City Council already is on the board with the idea.

Davies said he also wanted to recognize the efforts of his administration and other local leaders in brainstorming ideas on how to help facilitate the deal indirectly. In addition to Davies, in attendance were Service Director Andy Sutak, Water Superintendent Bill Suto, Pease Township Trustee Mike Bianconi and Vince Gianangeli, former director of the Belmont County Department of Job and Family Services. Both Bianconi and Gianangeli are county commission candidates.

“I can’t thank them enough. We all kept praying and that’s the result,” Davies said.

Davies said he has walked to the pile of rocks and prayed every day since they were placed there in August 2019. During a prayer ceremony at that time led by the Rev. William Webster, pastor of Grace Presbyterian Church, the rocks were symbolically struck with a sledge hammer. Webster said breaking the rocks represented prayer chipping away at the problem.

On Monday, Webster said the news of the purchase had been a long time coming.

“Sometimes we feel forgotten and forsaken, but he’s here,” Webster said of God.

Davies said he could not give details about the LLC, but noted the new company likely would be releasing more information about its plans in the coming days.

“East Ohio Hospital, LLC, whose operator has successfully owned and operated a 110-bed facility outside Dayton, Ohio, for nearly a decade, is working with state and local government to reopen the hospital campus in Martins Ferry, Ohio, later this year,” Garrison said in his release.

“The Ohio-based operator is committed to returning localized and personal medical care to the residents of Belmont County and the surrounding communities.”

I-70 eastbound closed due to accidents