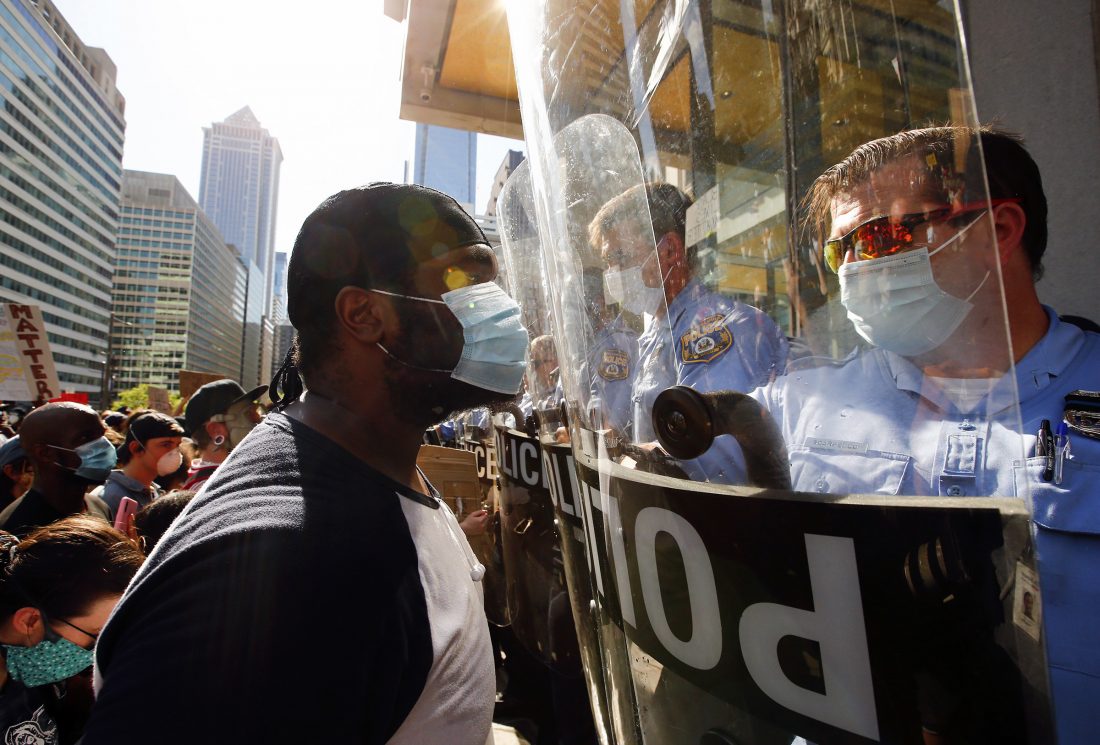 A protester and a Philadelphia Police officer look at each other during a Justice for George Floyd rally at the MSB on Saturday, May 30, 2020, in Philadelphia. Floyd died in Minneapolis police custody on May 25. (Yong Kim/The Philadelphia Inquirer via AP)

PHILADELPHIA (AP) — Thousands of people gathered in Philadelphia and Pittsburgh on Saturday to protest the death in Minneapolis of George Floyd, but the peaceful demonstrations later turned violent with police cars set ablaze and protesters smashing store windows and journalists attacked.

“Peaceful protests earlier were touching shows of our collective grief,” Philadelphia Mayor Jim Kenney said Saturday night, just as the city’s’ curfew hit. “But the anger being displayed this afternoon cannot and will not continue.”

In Pittsburgh, public safety officials said multiple officers were injured and three journalists were attacked or injured by protesters. Officials urged people to avoid downtown, where a police vehicle was torched earlier, as demonstrations continued into the evening.

Earlier Saturday, a crowd gathered at Philadelphia’s City Hall, kneeling for more than eight minutes in honor of Floyd, a black man who died after a white officer pressed a knee into his neck for several minutes. The protesters then marched through Center City to the Philadelphia Museum of Art.

There were also injuries to civilians, she said, but specific numbers have not yet been released. At least four police vehicles were set on fire.

Protesters sprayed graffiti on a statue of former Philadelphia Mayor Frank Rizzo, tried to topple it and set a fire at its base. Rizzo, mayor from 1972 to 1980, was praised by supporters as tough on crime but accused by critics of discriminating against minorities. His 10-foot-tall (3-meter-tall) bronze statue outside the Municipal Services Building, across from City Hall, has been defaced before and is to be moved next year.

Outlaw said that at least nine separate fires were set in the city, to both police cars and structures. A Starbucks coffee kiosk, situated in the plaza in front of City Hall, was set afire.

At least six arrests were made.

Outlaw said a mandatory citywide curfew of 8 p.m. Saturday through 7 a.m. Sunday has been implemented. Only essential duties will be allowed outdoors.

In Pittsburgh, crowds marched downtown to protest Floyd’s death. Police reported that the crowd near the PPG Arena was mostly peaceful but a group “overtook and destroyed” a marked police vehicle.

Wendell Hissrich, the city’s public safety director, said there is “extensive” damage downtown. A curfew is in effect until 6 a.m. Sunday.

In Harrisburg, PennLive.com reports that several hundred people gathered Saturday on the steps of the state Capitol, many standing silently with raised fists. Some chanted “I can’t breathe” and carried signs such as “White Silence is Violence,” “Fight for Your Country” and “No Peace No Justice.”