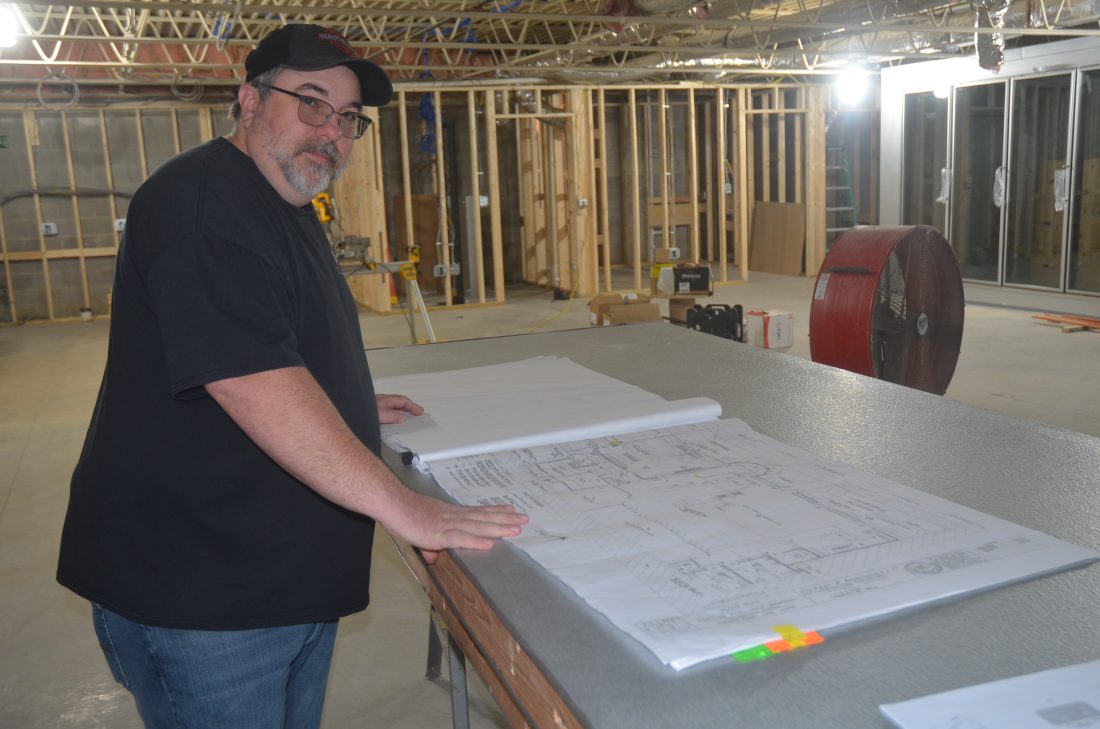 T-L Photos/KIM NORTH JOHN AYERS, owner of Hanover Fuel Stop in Martins Ferry, looks over plans for an expansion project the store is undergoing. Located at the corner of Ohio 7 and Hanover Street, the 1,200-square-foot business is growing to 5,000 square feet. The project should be complete by July 1.

MARTINS FERRY — Hanover Fuel Stop is known for its giant sandwiches called “hoggies” instead of the more traditional “hoagies.” Now, the space that makes and serves those delicious eats is getting much bigger.

Owner John Ayers said his expansion project has the business, located at the corner of Hanover Street and Ohio 7, growing from 1,200 square feet to a whopping 5,000 square feet.

“It’s a big space,” he said while standing in the area that will house the kitchen and deli. “We’re installing a 24-foot exhaust hood and fan. We also have a 15-door cooler for beer, juice, soft drinks and water products, etc.”

Ayers started the business in 1996 strictly as an automated gas station. As time went on, the business started selling small sandwiches and other things.

“I was the only employee at the time we opened as a gas station. Then we went to three people,” he noted. “Now we have nearly 30 employees, with 14 of them being full time.

“It has blossomed into something that is way bigger than either me or my wife, Brittany, had ever imagined,” Ayers continued. “We never thought it would grow to where we would have to expand like we are.”

While the overstuffed sandwiches will remain the same, they will be cooked differently.

“We will now place them on a conveyor belt and it will take the sandwich through the oven so that everything is consistent,” he added.

That isn’t the only change coming, as Ayers said the business will be open seven days a week, 24 hours a day. The deli, however, won’t be open around the clock.

“There will always be someone here to make something,” he said. “It will be open on Sundays, and we will also have late-night hours on Saturday.”

In addition, pizza will now be on the menu.

“We’re practicing with it. I want to do something that nobody around here does,” Ayers stressed. “We’re going to do a thin crust but we’re also going to do a Chicago-style, which are at different ends of the spectrum.

“Everyone in the Ohio Valley has square pizza. We’re going to do round pizzas. Something different.”

Hanover Fuel Stop’s famous wings will also be available seven days a week. In the past, they were limited to weekends only with numerous flavors and sauces.

“We’re working on making all of our own bread,” Ayers said. “We’re trying to make different types other than white, and we’re trying some gluten-free things, as well.”

There will also be fountain drinks and grab-and-go sandwiches, chips and other snacks available, along with a variety of other products.

The old portion of the building will be utilized for catering. Jeremy Tirpak is the head chef.

Delivery will still be available, depending on the size of the order.

“We try to accommodate everyone as much as possible,” Tirpak said. “We have delivered to the Belmont Correctional Institute on the other side of St. Clairsville. When they order as much as they do, it’s hard not to deliver there.”

KenCo, Erb Electric and Wheeling Heating and Cooling performed most of the work on the expansion project, which should be completed by July 1.

I-70 eastbound closed due to accidents