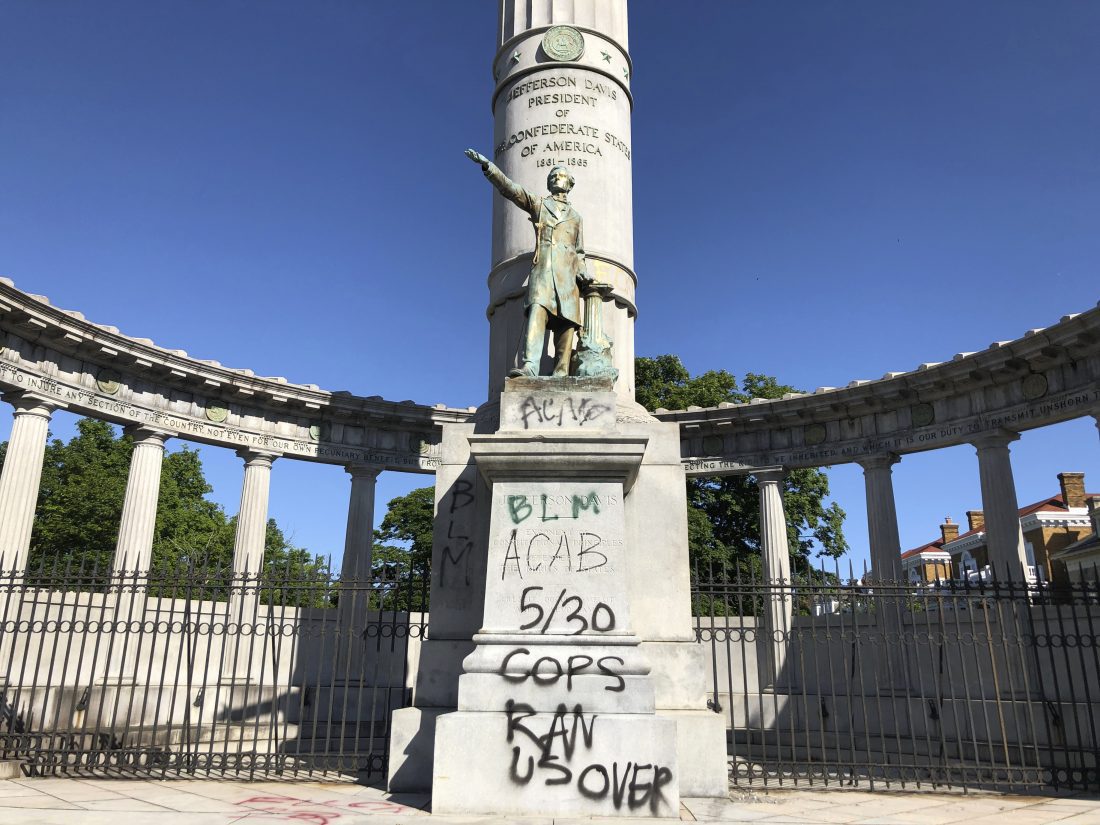 A monument to Confederate President Jefferson Davis in Richmond, Va., is covered with graffiti on Sunday, May 31, 2020, after overnight protests over the death of George Floyd. Many of the city’s most prominent Confederate monuments were tagged with similar graffiti. Protests were held in U.S. cities over the death of Floyd, a black man who died after being restrained by Minneapolis police officers on May 25. (AP Photo/ Sarah Rankin)

RICHMOND, Va. (AP) — Protesters demonstrating against the death of George Floyd, a black man who pleaded for air as a white police officer pressed his knee on his neck, targeted Confederate monuments in multiple cities.

As tense protests swelled across the country Saturday into Sunday morning, monuments in Virginia, the Carolinas, Tennessee and Mississippi were defaced. The presence of Confederate monuments across the South — and elsewhere in the United States — has been challenged for years, and some of the monuments targeted were already under consideration for removal.

The words “spiritual genocide” in black spray paint, along with red handprints, stained the sides of a Confederate monument on the University of Mississippi campus Saturday, The Oxford Eagle reported. One person was arrested at the scene.

Ole Miss administrators, student leaders and faculty leaders have recommended moving the statue — installed in 1906 and a rallying point in 1962 for people who rioted to oppose the university’s court-ordered integration — from a central spot to a Civil War cemetery that’s in a more secluded location on campus, but the state College Board has delayed action.

Critics have said its display near the university’s main administrative building sends a signal that Ole Miss glorifies the Confederacy and glosses over the South’s history of slavery.

In Charleston, South Carolina, protesters defaced a Confederate statue near The Battery, a historic area on the coastal city’s southern tip. The base of the Confederate Defenders statue, erected in 1932, was spray-painted, including with the words “BLM” and “traitors,” news outlets reported. It was later covered with tarp, photos show.

In North Carolina, the base of a Confederate monument at the State Capitol was marked with a black X and a shorthand for a phrase expressing contempt for police, according to a photo posted by a News & Observer journalist to social media. The word “racist” was also marked on the monument, the newspaper reported.

The question of Confederate monuments has been especially contentious in North Carolina, where such monuments are generally protected by law.

A nearly two-year battle was waged over the fate of the “Silent Sam” statue after it was toppled by protesters at the University of North Carolina’s flagship Chapel Hill campus in 2018. A legal agreement reached last November handed over the statue to a group of Confederate descendants, keeping it off campus. A Confederate statue outside a Durham courthouse was also torn down by protesters.

Democratic Gov. Roy Cooper had asked for the three Confederate monuments on the grounds of the Capitol to be moved to a nearby battlefield; a state historical panel voted in 2018 to keep the statues, but add context about slavery and civil rights. Statues in Winston-Salem and Chatham County were removed last year in rare moves.

But the state where the debate over Confederate monuments has perhaps attracted the most attention is Virginia, where a 2017 white nationalist rally over Charlottesville’s proposed removal of such monuments turned deadly.

In the coastal city of Norfolk, protesters climbed a Confederate monument and spray-painted graffiti on its base, according to photos posted by a Virginian-Pilot journalist. Norfolk is among the Virginia cities that have signaled intent to remove their Confederate monuments. In February, state lawmakers approved legislation that would give cities autonomy to do so.

A commission in Richmond, the state capital and what was the capital of the Confederacy, recommended removing one of five Confederate statues along the city’s famed Monument Avenue. Photos posted to social media late Saturday and early Sunday showed the bases of at least two statues — those of Confederate generals Robert E. Lee and J.E.B. Stuart — almost entirely covered in graffiti. A statue of Confederate President Jefferson Davis had “cops ran us over,” spray-painted on the base. A noose had been flung over Davis’ shoulder.

A fire burned for a time at the headquarters of the United Daughters of the Confederacy, a group responsible for erecting many Confederate statues and fighting their removal. The building, too, was covered in graffiti, The Richmond Times-Dispatch reported.

In Nashville, Tennessee, and in Philadelphia, statues of people criticized for racist views, but without Confederate ties, were also targeted.

Protesters in Nashville toppled Saturday a statue of Edward Carmack, a state lawmaker in the early 1900s and newspaper publisher who had racist views and wrote editorials lambasting the writings of prominent Tennessee civil rights journalist Ida B. Wells, The Tennessean reported.

Protesters sprayed graffiti on a statue of former Philadelphia Mayor Frank Rizzo, tried to topple it and set a fire at its base. Rizzo, mayor from 1972 to 1980, was praised by supporters as tough on crime but accused by critics of discriminating against people of color. His 10-foot-tall (3-meter-tall) bronze statue across from City Hall has been defaced before and is to be moved next year.