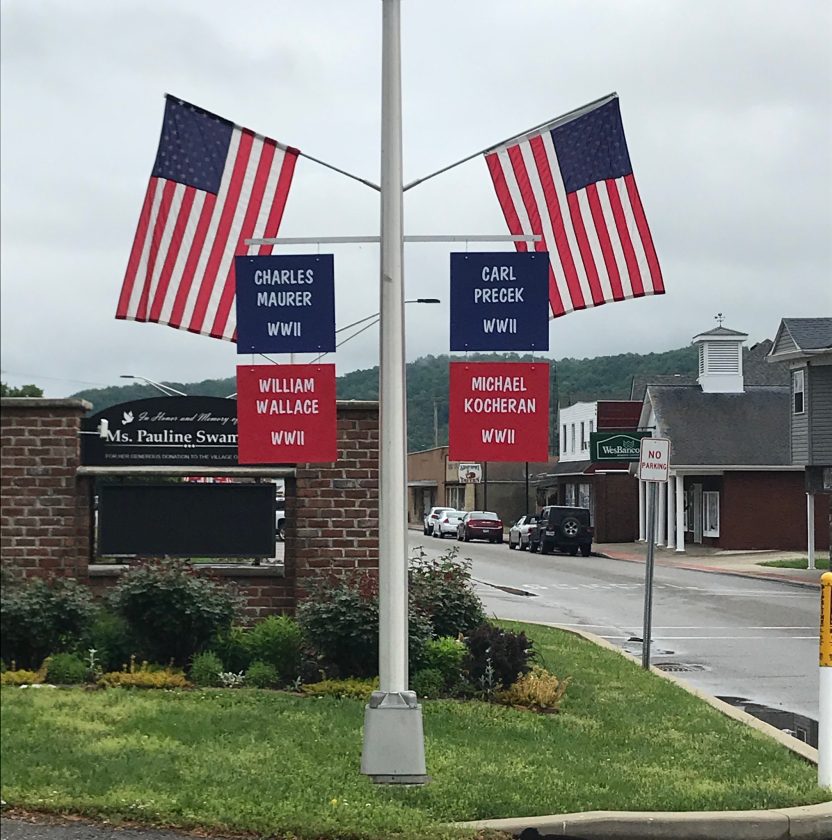 Photo Provided PICTURED ARE two of the new signs that were recently hung in Shadyside to honor the 43 village natives who died while serving in a war in the military. The signs will hang throughout the holiday weekend. It was the idea of village Councilman Bob Bell, who reached out to Shadyside Local Schools Superintendent John Haswell, who got members of the school staff to assist in the project.

SHADYSIDE — Bob Bell has been noticing more and more communities doing their part to pay homage to their native veterans.

A village councilman, Bell decided it was time that Shadyside got involved, too.

“You walk past the honor rolls that are in front of the American Legions or VFW, see the names, and unfortunately, many people don’t think too much about it,” Bell said. “I was trying to think of a good way to remember the veterans and their sacrifices.”

So, during the winter, with Memorial Day in mind, Bell approached Shadyside Local Schools Superintendent John Haswell with his idea. Bell wanted to recognize the 43 natives of Shadyside who have lost their lives in the line of duty in a similar way to which Shadyside High School’s athletic teams are recognized during their respective seasons.

That is done by utilizing the median strip along Central Avenue. Street lights in that area each have a bracket to hold an American flag, and below that is a spot for signs to be hung.

Similar to how a sign for each member of the entire football team has a sign hung on those poles during the fall, Bell came up with the idea for signs to be hung showing the veterans’ names and the wars in which they died.

Haswell and the school district jumped on board with the idea immediately.

“It’s a great thing to honor our veterans,” Haswell said. “It was a great project.”

Like so many projects and events, though, it almost didn’t happen because of the coronavirus pandemic. Originally, Haswell approached National Honor Society advisor Vince Thornburg with the idea as a community service project. Then the pandemic hit and the schools were shut down.

Bell had actually become resigned to the fact that the signs were probably going to have to wait until 2021.

“It was amazing that Mr. Haswell and the school were able to come together to take care of it,” Bell said. “I wasn’t expecting it after (the pandemic) hit, but we’re sure pleased with how it turned out.”

Because he felt the idea “was too important to let go,” Haswell got some of the Shadyside Local Schools staff to help.

“They made it happen,” Haswell said.

Industrial arts teacher Jonathan O’Grady did all of the cutting that was needed, and DeeDee Mullett arranged all of the lettering. Others who contributed in some capacity were Tennile Singleton, Abby Merryman, Heidi McConn, Bethany Perkins, Nikki Butts, Shelly Hertler and Jeff Campbell.

Each sign is lettered on the front and back, meaning the names can be read regardless of whether a person is driving north or south on Central Avenue.

“It was a great project,” Haswell said.

The 43 people honored include:

“The Shadyside Local School District is proud to be a part of this,” Haswell said. “When you’re driving through town, the flags and signs are beautiful.”

The signs will be taken down shortly after Memorial Day and stored away. Bell hopes they will be hung for next Memorial Day, too.

Actually, Bell believes the project may grow. While those 43 will forever have their signs, he’s already had other members of the community reach out about honoring their loved ones who have served or are currently serving in the military.

“Eventually, we’d like to have like St. Clairsville and Moundsville have done and allow the families to order a banner, but we’re still in the talking stages about that,” Bell said.