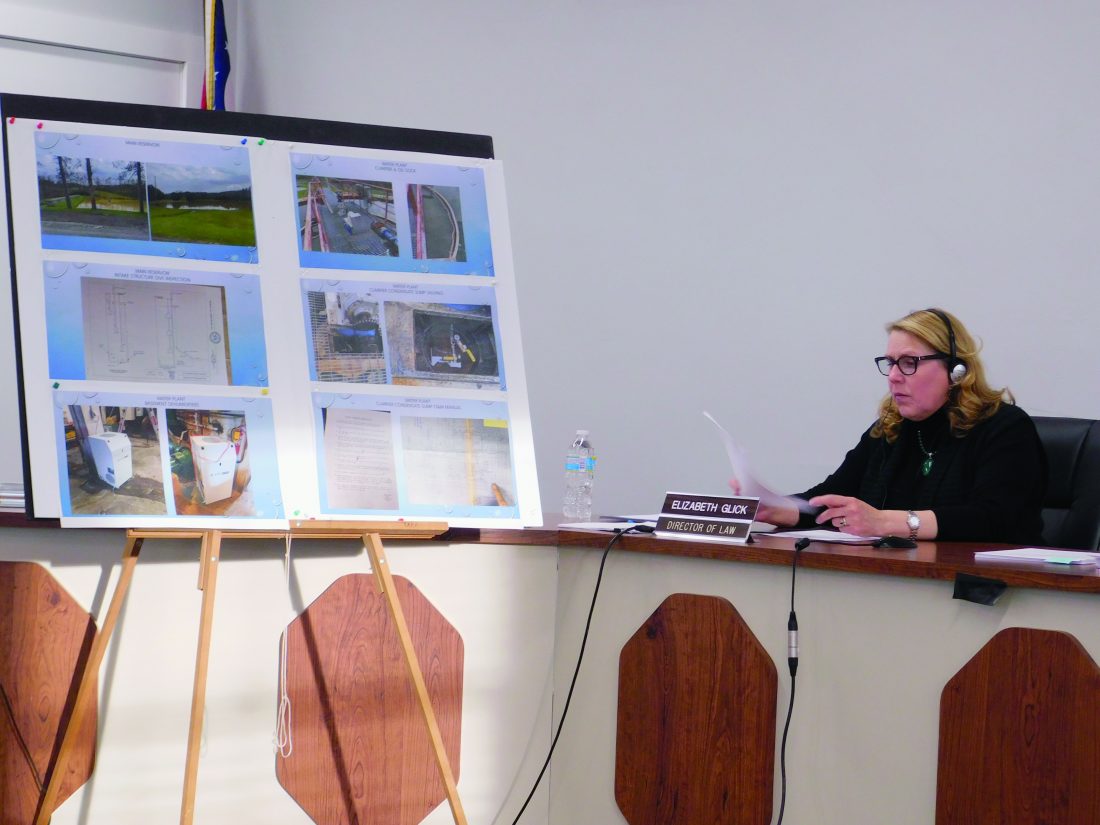 T-L Photo/ROBERT A. DEFRANK Several pictures of the state of St. Clairsville’s water system as well as a booster station for obtaining water from Belmont County were still up for viewing Monday after a press conference last week about the feasibility of addressing the city’s water needs locally. Law Director Elizabeth Glick spoke about the costs of renegotiating a privatization contract after new OEPA directives and improvements made by the city. Council voted down privatization.

The vote occured on May 4, the deadline set by the private state-regulated company Aqua Ohio at the beginning of this year for Mayor Kathryn Thalman’s new administration to commit to a contract with the company. It was negotiated by the prior administration and would have sold the water and wastewater systems to Aqua Ohio.

For close to a year, city leaders and the public have debated the future of water service in the city. Last week, Thalman hosted a press conference where engineer Jeff Vaughn reported 14 of the 16 Ohio Environmental Protection Agency mandates have been met and that it was feasible to upgrade existing connector lines and purchase water from Belmont County in the long term.

The OEPA has ordered St. Clairsville to mothball the treatment plant and reservoir and find an alternative source of water.

During Monday’s teleconference meeting, Thalman made her position clear.

“This has certainly been a controversial and passionate topic,” she said.

“I am sure I would not be sitting here tonight if it weren’t for this topic.

“I ran for mayor on the promise that all options would be studied and put on the table before a decision of this magnitude could be made.”

She outlined the improvements that have been made to the system.

“The facts are indeed on the table,” she said. “I am 100 percent supportive of St. Clairsville maintaining our own water systems. We will maintain pride in our ownership.”

She also said privatization would mean taking revenue away from the area, that Aqua Ohio would have used outside contractors and workers, and that selling the water system would be a blow to St. Clairsville’s image.

Council President Jim Velas said due to new OEPA mandates regarding the water treatment plant and the city’s repairs and upgrades, the contract on the table was no longer valid and would have to be renegotiated. The cost of negotiating the last contract was $33,000.

Velas said Aqua Ohio has expressed an interest in renegotiating the contract but asked if a majority of council members were in favor of considering privatization. Aqua Ohio submitted potential changes to the contract.

“The timeframe we’re fighting here, with two years one way or another, regardless of whether we sell or didn’t sell, we’re fighting the clock and have got to make a determination quick so we can get started on a solution somewhere,” he said.

No council member made a motion to renegotiate.

Councilman Perry Basile made a motion that council not proceed with negotiations. Council members Basile, Mike Smith, Beth Oprisch, Terra Butler and Mark Bukmir voted in favor. Councilwoman Linda Jordan abstained. Councilman Frank Sabatino, who has been a voice of opposition to Thalman’s administration, did not call in to participate in the meeting.

The city will continue to use the water plant and reservoirs for the next two years while repairing water leaks in the distribution system and seeking funding for this work.

Before the vote, Bukmir asked about one of the proposed changes in Aqua Ohio’s contract. The company proposed investing in Belmont County’s water system upgrades in exchange for reducing the cost of water and moving that savings to the residents in the form of lower water rates. Bukmir asked if the city could further negotiate water prices with the county.