The Enforcer has arrived in Ohio, welcomed by Pence 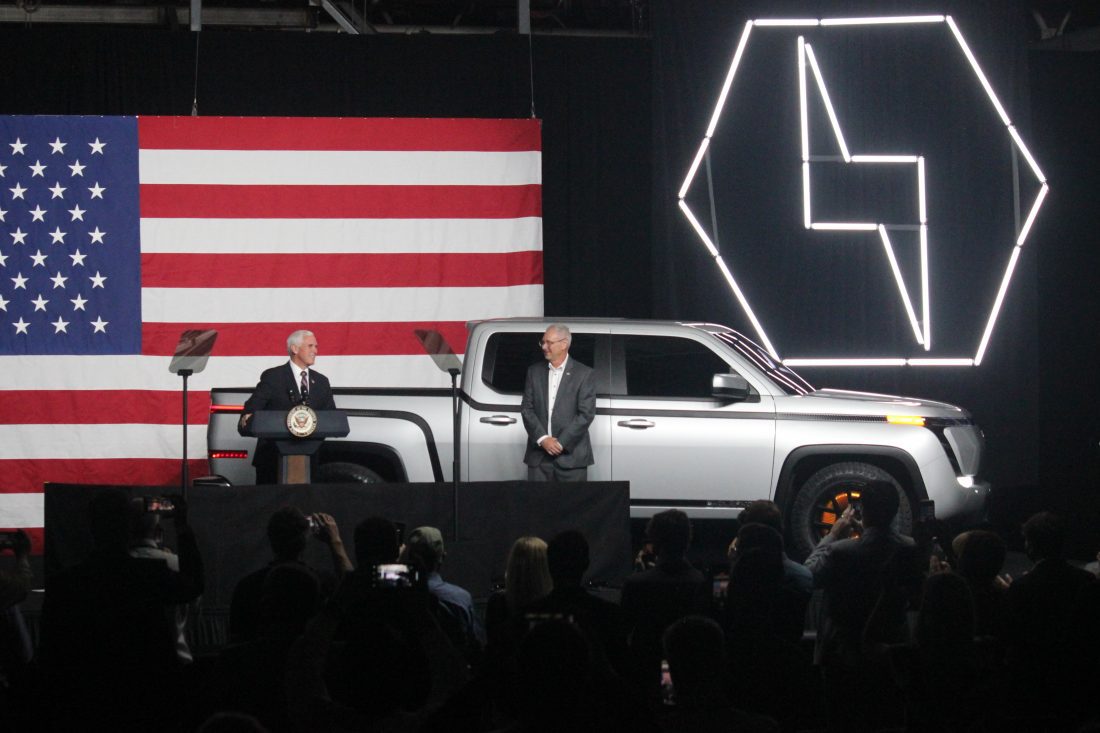 LORDSTOWN, Ohio — Lordstown Motors Corp. debuted a running prototype of its all-electric pickup truck, the Endurance, production of which has been driven back until at least mid-2021 due to work stoppages brought on by the pandemic.

“I even have to put an asterisk on that, assuming COVID is done,” said Lordstown Motors CEO Steve Burns with the stunning full-size pickup — silver with black body and copper wheel accents — parked behind him at Thursday’s introduction.

The day, however, belonged to Lordstown Motors and the Endurance.

It marks a significant milestone in the trajectory of the company, which just seven months ago acquired the sprawling plant from General Motors cheap — $20 million. The company has cleared its share of hurdles to get to Thursday, including winning over the local community, which didn’t have too much faith when the sale and Lordstown Motors’ plans for the electric truck were announced last year.

“We’ve gone from disbelief, ­people didn’t believe, which is natural, we didn’t expect different­, and there was some animosity toward us even, associating the plant with ill feelings even though we had taken ownership,” Burns said.

“I think it is slowly starting to turn. It’s an education process, trying to educate what we are doing here because it is so different, and as the education level is going and and we announced sales and show the first product, it’s all toward the belief. But we don’t rush that. That will come when it comes, but what is great for us is enough people believed to start buying these.”

There are about 14,000 orders for the Endurance, which has a sticker price of about $52,000 before tax incentives. So far, the company has commitments from ServPro, Akron’s First Energy and Momentum Groups, a fleet management company in Westlake, for about 2,000 trucks.

In addition, there are deals with Clean Fuels Ohio and Innervation, a Florida company that specializes in electric-vehicle charging stations, to broker, or encourage companies to purchase 1,500 more Endurances.

The first year of production is presold, Burns said. The sales came ahead of the reveal.

Starting early was necessary for the company to gauge interest.

âWe had to know before we sunk this much into it, is there a demand, would people buy it? Intuitively, we knew a 75-mile-per-gallon (equivalent) pickup truck could sell at our price point; we didnát know if they would buy it from a new OEM (original equipment manufacturer), an unknown,ã Burns said. âI think the carrot is so strong with its economy that they are willing to buy from an unknown.ã

The Endurance has four moving parts ä the four in-wheel motors. In comparison, perhaps the most simple car made, the Ford Model T, had 700 moving parts.

The minimalism continues to the interior. The company has released renderings of the interior, but did not let it be seen Thursday. Burns, however, said most of the controls are on a large, elongated screen that occupies about half of the dash. There are a few knob controls, done because of feedback received from customers, he said. It will include laptop connectivity.

The truck has a range of about 250 miles and can, with a fast charge, recharge in about 40 minutes. Those who plug in overnight, depending on whatás left in the battery, can expect a full recharge in four to eight hours.

The first wave of people hired will include 400 line workers and 100 more each in the battery and motor plants. There will be 300 or so engineers employed, too. Line workers will be brought in about two months before the start of production.

âWeáre going to get them in so we can train them from maybe their previous skill to building electric vehicles,ã Burns said.

Company officials met with representatives of United Auto Workers earlier this year on having a union workforce at the plant. UAW Local 1112 represented workers when GM operated the plant. Burns isnát opposed to having a union shop.

âWe met with the union maybe four or five months ago, just our first meet and greet,ã Burns said. âBut I have always said the same thing, we want what our workers want, so itás not really up to us. If the workers would like to unionize, weáll make it work … I need happy workers, so what makes them happy.ã

Right now at the 6.2 million-square-foot facility there is test manufacturing happening. Also, contractors are retooling and reconfiguring the plant, which last produced the Chevrolet Cruze, to produce the electric truck.

âSome things it (the viral outbreak) slammed shut, so all of the people in the factory that are retooling and moving stuff and digging in the factory, that had to stop completely,ã Burns said. âFinancing pretty much stopped completely.ã

Still under consideration is a loan from the U.S. Department of Energy to help Lordstown Motors ready the plant to build the Endurance.

âIt is attractive to us and the DOE is being a great partner to us, but we arenát counting on it. I think itás fair to say like any loan you are trying to get from a bank, you need to really prove you donát need it before they will give it to you,ã Burns said. âThey know we have the chops to make it. The DOE is very technical, thereás a lot of engineers and scientists in there, so they know we have the chops to make it. The only thing they canát control is, do people want it ä and that is why the presales are so important.ã

The program, created in 2008 to foster development of fuel-efficient vehicles, made billions in loans to Ford, Nissan and Tesla. The Trump administration, however, has suggested the program be eliminated.

When Lordstown Motors bought the facility from GM, there were two options: to lease back space at the facility, which GM let lapse, and to repurchase the plant. The latter was set to expire at the end of May, but the sides agreed to extend it through August.

A GM spokesman has previously confirmed to this newspaper the automaker will not reclaim the facility.

Beyond the help GM offered to help Lordstown Motors acquire the facility, Burns hopes for a future partnership in some way. GM is building a $2.3 billion electric vehicle battery-cell manufacturing plant immediately adjacent to the plant.

GM might need every battery cell produced there as it embarks on an ambitious electric future, and Lordstown Motors needs batteries sooner under its production timeline, but Burns isnát ruling out the companies working together later.

âWe have a great relationship with them and we are buying a few off of them, some key parts in this, so hopefully it could be a richer relationship going forward,ã Burns said, adding the equipment is airbags and other auto parts.

The truck and what Lordstown Motors has accomplished and plans to accomplish, âgives you goosebumps,ã said Lordstown Mayor Arno Hill.

State Sen. Michael Rulli, R-Salem, suggested he may try to buy the first vehicle off the line, maybe to auction or use for deliveries at his grocery store.

âWe been with this from the ground, and just to see it actually tangible, itás an amazing thing,ã he said.