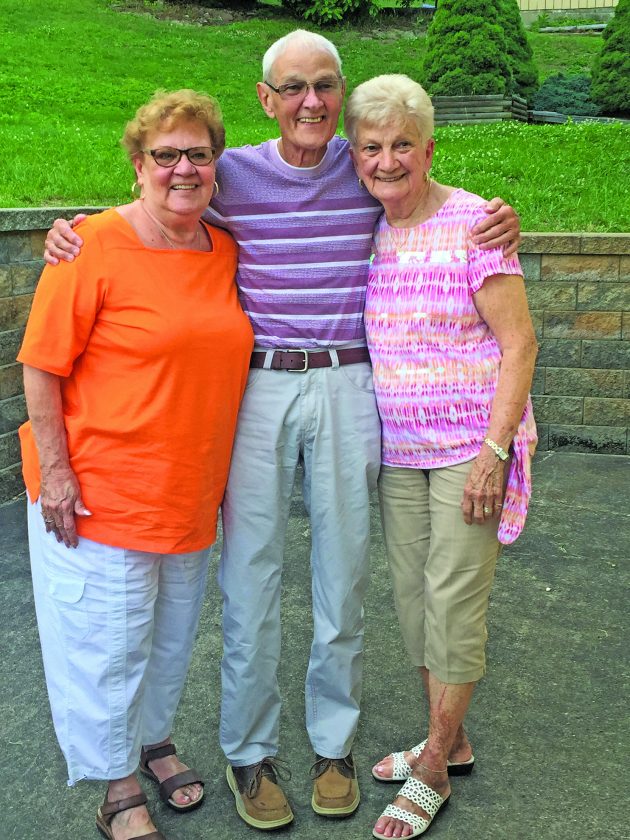 MARTINS FERRY — When Martins Ferry native Marjorie Pierson Zuboski began her quest 50 years ago to learn about her birth mother she ended up finding much more.

Zuboski, 86, was given up for adoption at birth. After many decades of thinking about her mother, she decided to try and find out more about her. Early on she did not have much success. However, recently with help from her son Ed and a friend’s grandson, Josh, Zuboksi found three half-siblings still living in the Ohio Valley. Social media and a genealogy/DNA website was integral to the process.

“I come back every year, it’s my home,” she said of Martins Ferry. “I live in Moore, Oklahoma. I lived in California for 17 years. When I was in my 30s I tried to start finding my mother because the neighbors said I was adopted. My home life wasn’t that good.”

This led to Zuboski wanting to find her birth mom.

Zuboski first started looking up documents at the courthouse. She discovered paperwork showing where she was born. This led to her finding adoption papers.

“Then I called Mother Superior at North Wheeling Hospital. … She was 22 and left in three days,” Zuboski said of her biological mother. “My mother’s name was Rose.”

She said her mother’s name was listed as Rose Johnson, though her last name actually was “Yensen.” Not knowing that she was using the last name Johnson made it more difficult to find her information, she noted.

Because of her diligence, Zuboski found that her birth mother had other children, which means she had half-siblings she had never met.

Zuboski had about given up on the process after not hearing back about progress regarding the online research. While attending a funeral in October she told her friend’s grandson good luck with the research. Before Thanksgiving, she called him and said thanks for everything, asking if she owed him any money for his efforts.

Her sisters Peggy Justice and Ann Baudin live in Wheeling, and brother Joe McCutcheon lives in St. Clairsville. She met all three during a recent trip back to the Ohio Valley.

“I found my brother, Joe, and two sisters,” she said. “My one sister is in Good Shepherd Nursing Home; her name is Peggy. My other sister is Ann.”

Zuboski said the first time she talked to her sister Ann on the phone she became stunned.

“I called her … it was overwhelming. I couldn’t talk,” she said.

DNA testing confirmed they were siblings.

Zuboski said while growing up in Martins Ferry she had no idea that her birth mother was living in Wheeling.

Zuboksi’s sister in law, Sharon McCutcheon, who is Joe’s wife, said she remembers Zuboski’s first question regarding her birth mother.

“The first thing she said to my husband was, ‘Do I look like my mother?’ That was very important to know,” Sharon McCutcheon said.

And indeed Zuboski does look like her mother. When comparing photos of them taken when they were both younger, it is hard to tell them apart.

Zuboski said her mother worked at L.S. Good’s Department store in Wheeling as a seamstress. Her siblings also told her she was a good baker, too.

Zuboski hopes to come back to the region in fall for another visit.