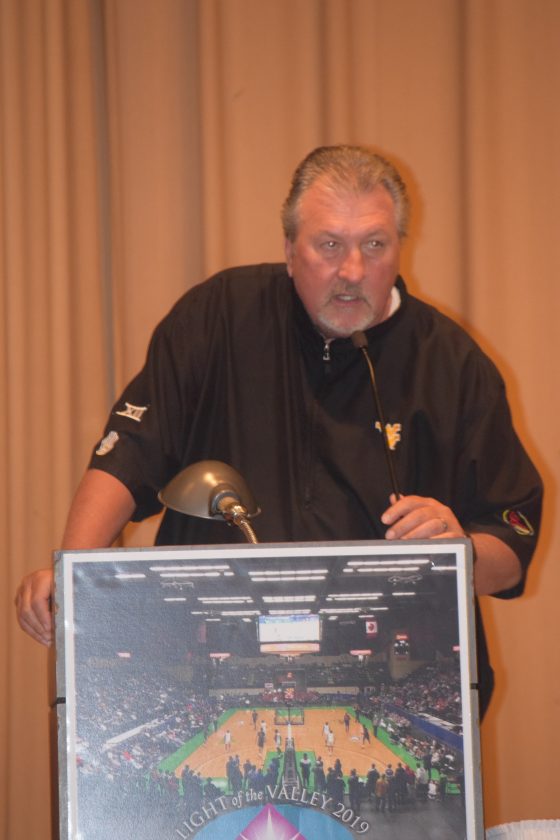 WHEELING — Bob Huggins can be a volcano on the coaching sidelines. The WVU hoop mentor, however, can be soft-spoken and praise worthy when the occasion arises.

The latter was the case Wednesday afternoon when Huggins was the featured speaker at the annual Light of the Valley luncheon at Wheeling Park’s White Palace. Dr. Gregory Merrick, a world-renowned urologic oncologist and director of Wheeling Hospital’s Schiffler Cancer Center, was presented with the Dr. Lee Jones Patron of Youth Award at the luncheon.

Huggins didn’t speak long (less than three minutes). He said he had little voice left after just finishing 14 hours of National Association of Basketball Coaches meetings with nothing getting done.

The two-time Academic All-American during his playing days at WVU did have the utmost praise for Merrick.

“I really don’t know when I first got to know him. But he impressed me from day one. He is a very smart man,” Huggins said. “What he has done in the medical field is truly amazing. He is very passionate about men’s health.

“But I also learned early on that he is also very passionate about basketball. The CRC Classic is a tremendous event and serves as a close recruiting tool for us,” he added. “He brings in great players, quality teams and quality people. That is what he is all about…doing things the right way. Doc is very deserving of this award today.”

After the banquet, Huggins turned his attention to his basketball team. The Mountaineers are coming off a forgettable 15-21 campaign, ending with a 109-91 home loss to Coastal Carolina in the second round of the College Basketball Invitational.

The former Conotton Valley and Indian Valley South prep star, however, has put that losing campaign in the rear view mirror and is exciting about his current group.

That team-first atmosphere was on full display this summer when Huggins took his charges on a three-game junket to Spain. The Mountaineers were impressive to say the least.

WVU routed the Madrid All-Stars, 97-69, in its opener followed by a 115-50 blasting of CC Basketball Academy of Valencia. The Mountaineers capped the trip with a 98-67 romp over the Barcelona All-Stars.

Wheeling Central’s Chase Harler and Cameron’s Logan Routt were two of the brightest Blue & Gold stars during the trip.

Harler, now a senior statesman with the team, tallied 39 points in three contests. The 6-11 Routt was the team’s leading scorer with 51 points to go with 23 boards.

Huggins is happy with both OVAC products.

“I am real pleased with Chase. He has played really well all summer,” Huggins said. “Logan just gets better and better.”

When asked if he thought the former walk-on would ever help the program, Huggins responded, “Anyone I look up to has a chance.”

The Mountaineer hoopsters will debut Nov. 8, hosting Akron. Huggins was a former head coach of the Zips.

Does that game have any special meeting for him?

“Not really. If we were playing in Akron it might,” he said.

Huggins was rushed for time after the banquet as he was headed to the airport. He did have time to give his thoughts on new WVU head football coach Neal Brown.

“He is a great guy and very down to earth,” Huggins offered. “He is soft-spoken and very humble.”