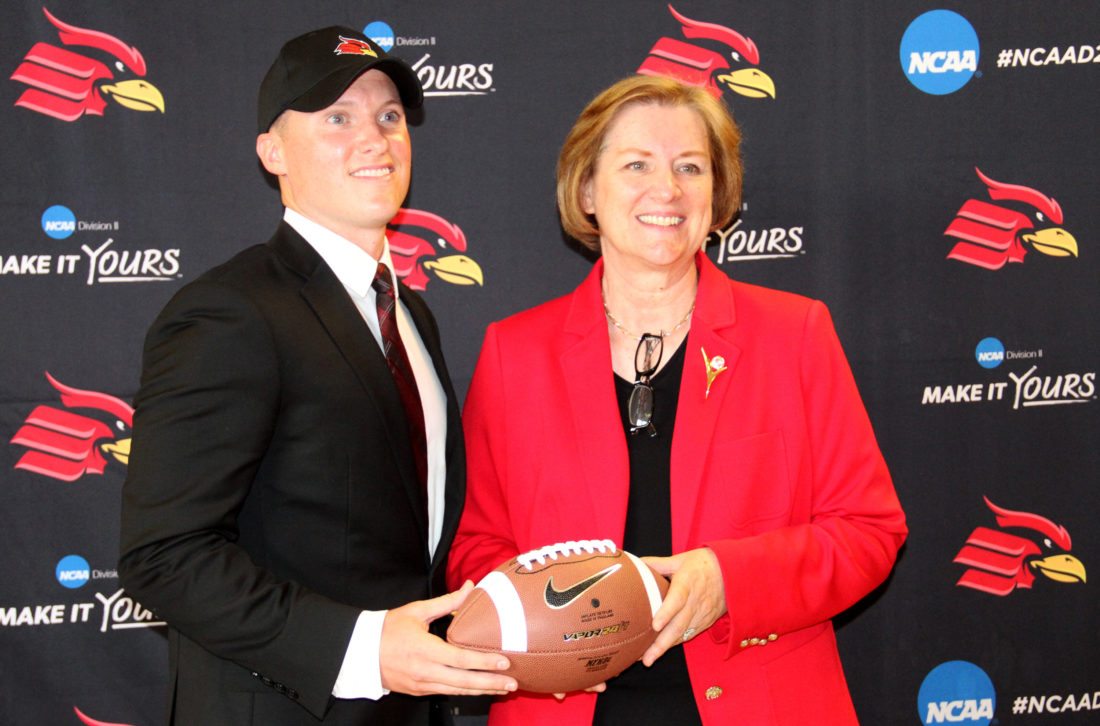 WHEELING — The Wheeling Jesuit University football program is less than a month old. It now has a name well-established and well-respected in grid circles to help the Cardinals take flight from infancy.

He was chosen out of 150 applicants.

Bruney, son of legendary Martins Ferry coach Dave Bruney, comes to the Friendly City D-II institution from Ohio Dominican University. He was cast in the roles of associate head coach and offensive coordinator for the Panthers.

“I’m truly honored and humbled at the trust the leadership has given to me to start our football program. This area is home for me. This is where I was born, where I was raised and where I grew up,” Bruney said. “This job — this program getting its start is always something I’ve kept an eye on from afar. Timing is everything, and for my wife and I, and our two young children, the timing is perfect. Now, it’s time to go to work.

“College head coaching opportunities are fleeting — they are rare. And the rarest of opportunities is starting and building a program from the ground up — this is probably toughest. So, we have a daunting task ahead of us. I want to thank (WJU) President (Dr. Debra) Townsley, Dr. Dentino and every member of the search committee that were a part of this process. It was a detailed and highly structured process, which means it was done the right way.”

Townsley said that a committee composed of WJU coaches, administrators, faculty and staff, along with representatives of the Cardinal Athletic Club, spent three days interviewing candidates for the football coaching position. She added that WJU received football inquiries from across the country.

“Zac has great drive and initiative, which will be necessary to grow our football program. But, more importantly, he is committed to developing young men to excel academically, socially, and spiritually in the true spirit of our mission,” Townsley said. “I know Zac will produce young men who will be successful on the field and in life. All of us at Wheeling Jesuit are happy to welcome Zac to the WJU family and we are glad we could bring him and his family back home to the Ohio Valley.”

When asked his first order of business in building the program. The 35-year-old quickly responded.

“To move my family here and get entrenched with the Wheeling Jesuit community. Jesuit is such a great place with great people. I am truly honored and humbled at the trust the leadership has given me to start our football program,” the offensive mastermind said. “Wheeling Jesuit is so well-respected for its athletic programs, as well as acdemically. We want to win the right way. We want to win while fitting into the university’s mission statement.

“I want to thank Ohio Dominican. They gave me a great opportunity to escalate my career. It was a tough decision to leave, especially leaving the players.”

Bruney spent five seasons with the Ohio Dominican program, helping the Panthers qualify for the playoffs in 2013 and 2014. Under his tutelage in 2016, quarterback Grant Russell ranked second in the nation in completion percentage (69.9 percent) and was named a Harlon Hill Trophy candidate.

Jesuit will launch its football program with an exhibition schedule in 2018-19 while building the capacity to play a full season during the 2019-20 season.

“This will be the first year since maybe I was in the third grade that I haven’t either played football or coached football. I plan to add one assistant for this fall,” Bruney said. “I would like to have my staff in place by Jan. 1, which should consist of five full-time assistants and two graduate assistants. Grad assistants do a lot on the D-II level. Often times they are position coaches.

“We will start our recruiting by focusing on the current seniors in the Class of 2018. We will build it class by class. By the 2019 season I would like to have 80-90 players involved with the program. We have a great recruiting base here that stretches to Washington, D.C. We are joining a conference (Mountain East) that is well respected in Division II. People need to be patient and realistic. But were are not afraid to play anyone in the conference. We will compete every week.”

Bruney quarterbacked Mount Union to a 23-1 record as a starter and was a finalist for the Gagliardi Award as the Most Outstanding Player in Division III. He was a member of two national championship teams at Mount Union as well.

Following his collegiate career, he served as an assistant coach with the Purple Raiders from 2005-07 before joining Toledo’s coaching staff as a graduate assistant. Bruney then returned to Mount Union, where he was the offensive coordinator from 2009-12, coaching four players who are currently playing professional football.

Bruney’s hiring was one well received by his father.

“I am very proud of how Zac has conducted his life. He has great character and integrity,” Dave Bruney said. “He has been a joy to us since Day 1.”

“I am excited to get started. It is not often you have the opportunity to build something from the ground up,” the new Cardinals grid boss said.

Zac and wife Amber are parents of 3-month-old twins, Quinn and Decker. Amber is the daughter of Dover High Hall of Fame football coach Dan Ifft.