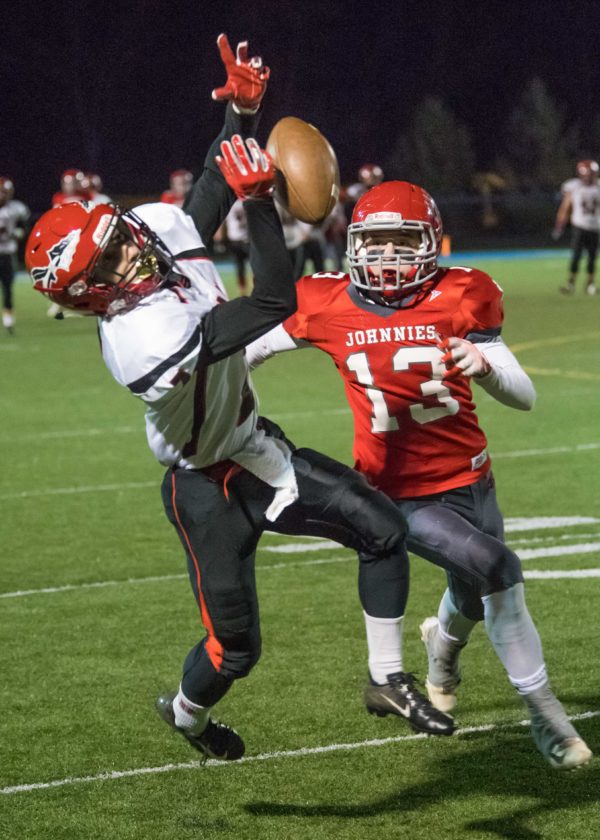 hoto/PAUL KRAJNYAK Bellaire’s A.J. McCarthy, left, goes up for a catch as Johnstown-Monroe’s Cole Workman defends during their Ohio Division V, Region 19 semifinal Saturday night at Maysville High School. McCarthy made the grab, a 37-yard pass from Bobby Roth, but the Johnnies picked up the victory, 35-7.

But as well as ‘Spig’ could forewarn his team of what to expect, actually getting a grip on it was something else.

The Johnnies, with their 3-headed backfield churning at full speed all night, scored 14 points in an 18-second span late in the first half and used the spurt as a catalyst to a convincing 35-7 triumph inside the Maysville High School Athletic Complex.

Johnstown-Monroe (11-1), the region’s top seed, will battle another OVAC squad, Meadowbrook, this Saturday night for the right to play in the state semifinals. The Colts doubled up Ridgewood, 50-25, in New Philly.

“We got beat by a good team,” Spigarelli said moments after speaking with his squad inside a subdued Bug Reds’ locker room.

“Their quarterback is a very, very good athlete. They put their best athlete at quarterback.”

Caden Calhoun, the 5-9, 165-pound senior, was a workhorse, rushing for 220 yards and three touchdowns on 15 carries, bolstering a Johnnies’ rushing attack that amassed 396 yards.

Johnstown-Monroe continued its trend of staying away from the pass, not attempting one in ending Bellaire’s season at 8-4.

“I thought we had a great gameplan,” Spigarelli said. “The kids did a great job all week. We had 10 guys in the box trying to simulate that stuff in practice, but it was kind of tough.”

The Johnnies’ dive option gave the Big Reds fits most of the night. That, along with Johnstown-Monroe’s play along the offensive and defensive lines, made things difficult for the Big Reds, especially in the early going.

“Every time I kept looking up it was 2nd-and-12 or 3rd-and-13,” Spigarelli said. “We had a hard time getting to like 2nd-and-5, which is a place we’d been most of the year. It’s hard to come from behind like that.”

Bellaire’s defense hoped to put the Johnnies in a similar position to force a rare pass, but Johnstown-Monroe only faced one 3rd-and-long, a 3rd-and-11 on its opening drive, and ran on the play and punted. From there, J-M was able to move the chains with relative ease during the opening half.

Calhoun (48 yards) and fullback Luke Myers (12 yards) both scored on runs in the first quarter, but Bellaire’s defense started to tighten at that point. A big play came with 6:15 left in the half when the Big Reds halted the Johnnies on fourth down at their eight.

But that gave Bellaire the ball deep in their own territory, and the Big Reds struggled to get any breathing room thanks to a Johnnies’ defense that had allowed just three first downs and one big play — a 37-yard pass to A.J. McCarthy — up until that point.

Bellaire punted the ball back to J-M at their own 45. Four plays later, Calhoun looked like he was going to pass but, instead, tucked the ball under his arm and scampered 39 yards for a score that made it 21-0.

On the first play of Bellaire’s ensuing possession, Big Reds quarterback Bobby Roth tried to hit Trace Sechrest over the middle, but the the pass was tipped and intercepted by the Johnnies’ Kaden Davis.

Calhoun scored on the next play, this time from 37 yards, making the score 28-0.

“Those were two big plays,” Spigarelli said. “I thought, if we could’ve got to halftime trailing 14-0 I would’ve liked our chances a little bit better. The kids played hard in the second half even though they scored on their first drive. They had to earn that.”

The Johnnies went ahead 35-0 with 6:53 left in the third, but not before having to march 78 yards in 12 plays. Bryce Writesel scored from two yards out on his only carry of the night.

Bellaire’s Cole Porter put the Big Reds on the board in the fourth with a 15-yard run capping a campaign in which he became the school’s single-season yardage leader. His 33 yards against the Johnnies gave him 1,612 for the season.

Porter will be one of many players returning next year from a squad that was heavily filled with underclassmen. Spigarelli acknowledged he played a lot o young players, but didn’t want to dismiss the impact his seniors made this fall. He wanted them to have a successful season and credited them for helping restore the roar, so to speak, in the program.

“They helped bring back the pride and tradition,” Spigarelli said. “I’ll always love those guys for that.

“But, for the younger kids, let’s learn from this and get back in the weight room and get bigger, faster, stronger.

“We just didn’t want to show up for this game, though. We wanted to play well and play to the best of our ability and win. It just didn’t happen for us.”