Coaching is a family affair for the Grinches at Shadyside 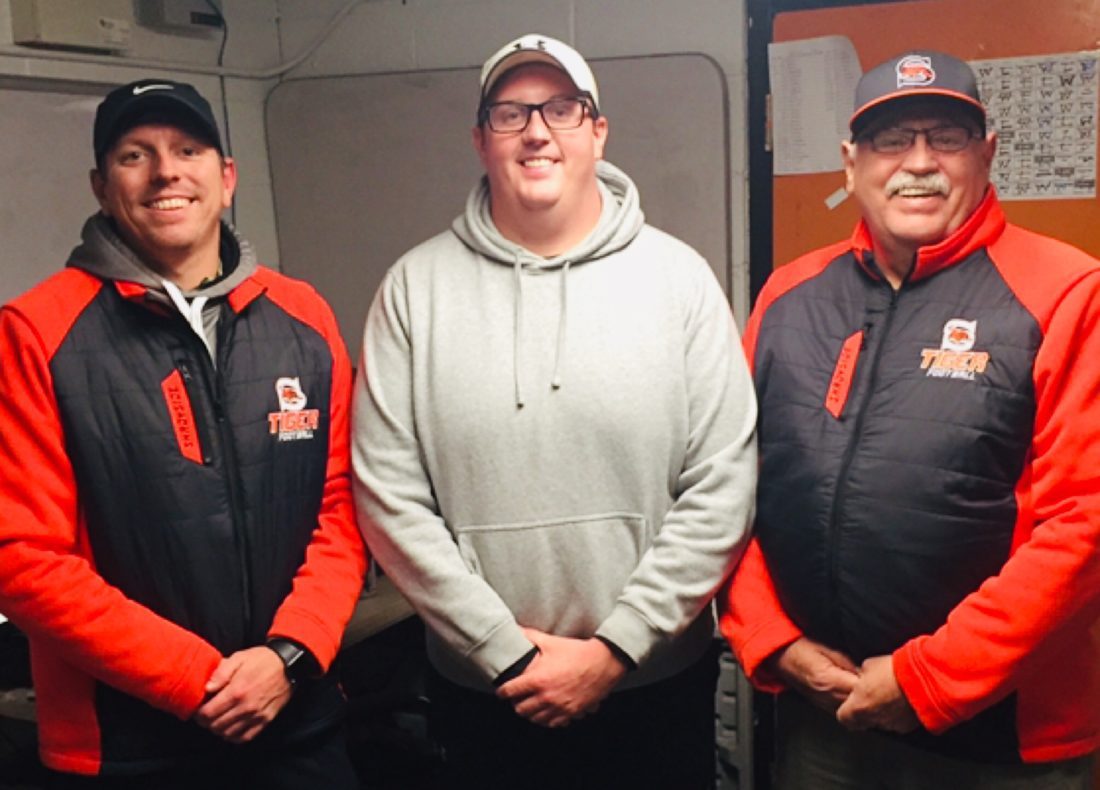 Photo Provided THREE MEMBERS of the Grinch family of Shadyside are members of the football staff as the Tigers play for the Ohio Division VI, Region 23 championship against Fort Frye. From left, are Sean, the defensive coordinator; Chase, offensive line; and John, defensive line.

SHADYSIDE — The Grinch family — father, John, and sons, Sean and Chase — has a combined 60 years of high school football coaching experience. However, not until this fall had the trio coached together on the same sideline during a game.

John started coaching at Shadyside in 1980 and currently serves as the defensive line coach. Among his 38 years, he had an 8-year stint as the Tigers’ head coach from 1992-99. Chase has been on the staff for 11 years after playing a season at Muskingum University. He has been the offensive line coach since early in his career. Sean, meanwhile, is the newcomer. After 11 years as a very successful assistant coach at Indian Creek, the last seven as defensive coordinator, he returned to Tiger Town after being offered a teaching position in the Shadyside school district.

All three are members of Head Coach Mark Holenka’s staff which has been preparing the Tigers for the Ohio Division VI, Region 23 championship tonight against fellow Ohio Valley Athletic Conference member Fort Frye (11-0) at Eugene Capers Field on the Meadowbrook High School campus in Byesville.

The two defensive masterminds, along with a few others, have prepared the stop troops to hold a pair of high-powered offenses — Frankfort Adena and Bainbridge Paint Valley to virtually nothing as the Tigers have outscored a pair of playoff foes by a combined score of 74-12.

“It’s been great,” John said of the three finally getting together on the same staff. “Of course, we say our peace of mind and we have our differences, but at the end of the day … you know we work together. That’s what counts.”

He said the boys got an early start towards their coaching careers.

“They always came to practice with me when they were little,” he said. “I guess you could say they were indoctrinated real early in life.”

“It’s nice. It’s definitely a good mixture because we bounce things off each other,” Chase added about the reunion. “We talk a lot about things. The pros definitely outweigh the cons when it comes to coaching with your brother and dad, but I wouldn’t change a thing.”

“It’s fun. It’s a definitely and interesting dynamic,” Sean admitted. “My dad and I work more together because we are on the defensive side of the ball, but being around Chase is great. He does a great job with the offensive line.

“All of the coaches here are awesome. We have a really close knit group of guys. A lot of the guys came through the program here and are former players.”

John got his start playing linebacker at Dubois, a large high school in Pennsylvania where he had 400 classmates.

“My passion has always been with the defensive side of the ball.”

John has been on two staffs that reached the state finals.

“All of the teams are special. Any time you have a deep little run into the playoffs, it’s special,” he said.

Following his graduation in 2007, Chase went to New Concord where he played a season for the Muskies. He then transferred to Ohio University in Athens, but didn’t miss a Shadyside game.

“I used to travel back-and-forth when I was in college. On Fridays I’d come home and coach on game nights.”

So, how did a two-way tackle in high school stray away from the path his father and brother took?

Sean graduated from Shadyside in 2002 after a superb four-year career.

“We’ve got a great bunch of kids and coach (Mark) Holenka was my defensive coordinator when I played,” he said. “He was defensive coordinator here until he took the head coaching position when Ty (Fleming) resigned. These kids know how to play defense, and they know what is expected from them. They are very coachable kids.

“He (Holenka) has laid a ton of groundwork as which ways to go. He’s a big part of the success here.”

Each was asked if they would rather be playing a team they are familiar with or a team like Fort Frye which they have never played before.

“The new teams are always a challenge because you are always in the film room,” John explained. “We spend hours watching and breaking down film, but it’s always nice to know what a team does.”

Chase said, “It’s fun both ways. This is a unique challenge for us, but I think the challenge is more on the defense because Fort Frye has a great offense. On defense they are very sound and play very well.”

For Sean, it’s just another game.

“It’s doesn’t matter to me. I think the biggest challenge is figuring what the opposing offense is going to try and trying to come up with something to shut it down the best you can,” he noted. “Relaying that to the kids is the key. You can draw up any scheme you want, but if the kids don’t execute the game plan week-to-week, it’s for naught. These kids work and want to learn. They prepare and practice hard.

“They (Fort Frye) are very good. They are 11-0 for a reason,” he stressed. “They are very similar to Wheeling Central with all of their wing-T stuff, but they are well-coached in all three aspects of the game.”

The Grinch family is completed by oldest son, Paul who lives in Fort Mill, S.C., and mother, Penny.