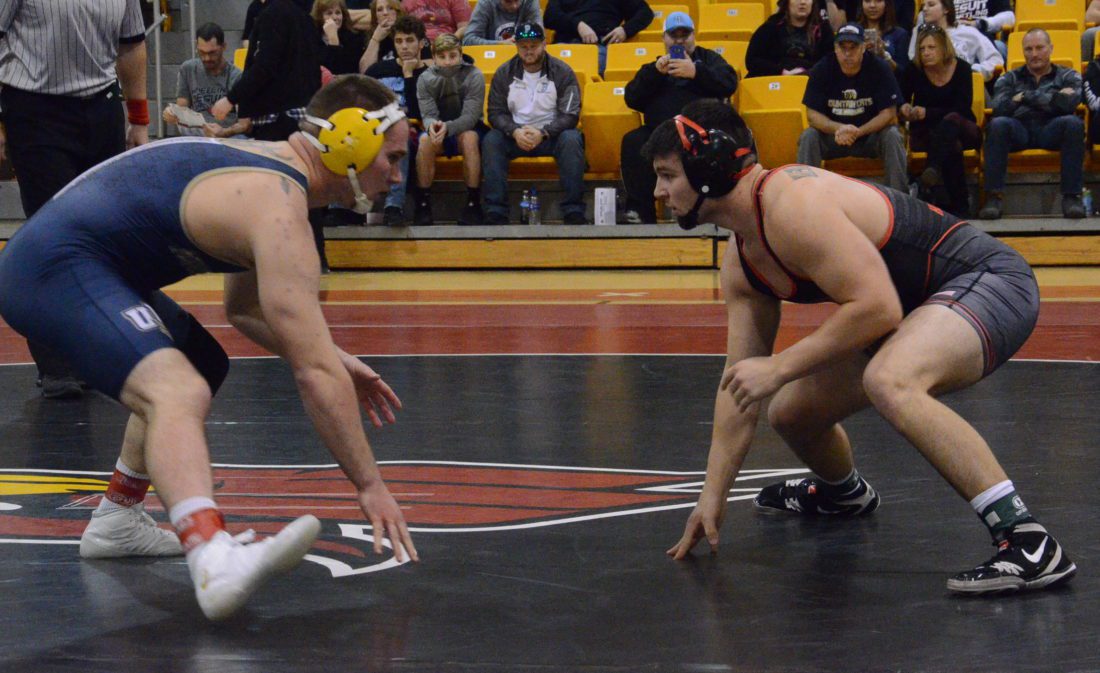 WHEELING — Dual meet wrestling — high school or college — is a chess match more or less between the two opposing coaches. However, there is one thing that the coaches can’t plan on … bonus points.

A pair of nationally ranked NCAA Division II wrestling powerhouses — No. 5 Wheeling Jesuit and No. 6 University of Pitt-Johnstown — each won five bouts Sunday afternoon inside the Alma Grace McDonough Center, but it was the Mountain Cats (2-0) who prevailed by virtue of two major decisions and a technical fall that resulted in four bonus points in a 19-15 squeaker.

“You can’t give up bonus points in a dual when you’re facing top 10 teams,” Wheeling Jesuit (1-2) second-year head coach Danny Irwin said of the Mountain Cats. “You can get away with it, but there is a reason they (Pitt-Johnstown) bring home team trophies. There is a reason why they are a staple of a program in Division II. They showed that in all 10 matches.”

A 7-2 decision by national runnerup and fourth-ranked Joey Alessandro at 141 and a 16-0 technical fall by defending national champion Chris Eddins, who is ranked No. 4, gave the visitors a slim 8-6 edge.

The Cardinals took a 9-8 lead at the half when Christian Rivera rallied from a 3-0 deficit early in the second period for a 7-4 victory.

“Christian Rivera is someone I think the program can look too. He weighed in at 151 pounds after competing Saturday at W&J. He wrestled a real solid match.”

However, the Mountain Cats captured three of the first four bouts after the intermission to take an insurmountable, 19-12, lead into the 285-pound bout.

Fifth-ranked Devin Austin earned a 3-1 decision over Wheeling Jesuit’s No. 8 Keegan Driscoll when he recorded a takedown with 30 seconds remaining to give the Keystone State squad a 11-9 advantage.

After the Cardinals’ Connor Craig scored a 11-5 nod at 174 to give the hosts a slim, 12-11, lead, back-to-back major decisions gave the Mountain Cats the victory.

Wheeling Jesuit made the final score a little more respectable when returning national champion Terrance Fanning posted an 8-5 decision at 285.

“I knew it wasn’t going to be easy,” veteran Pitt-Johnstown head coach Pat Pecora said. “Wheeling Jesuit is doing some nice things here since it started a wrestling program.”

The Cardinals are back at home on Sunday, Dec. 2 at 7 p.m. when rival West Liberty visits.