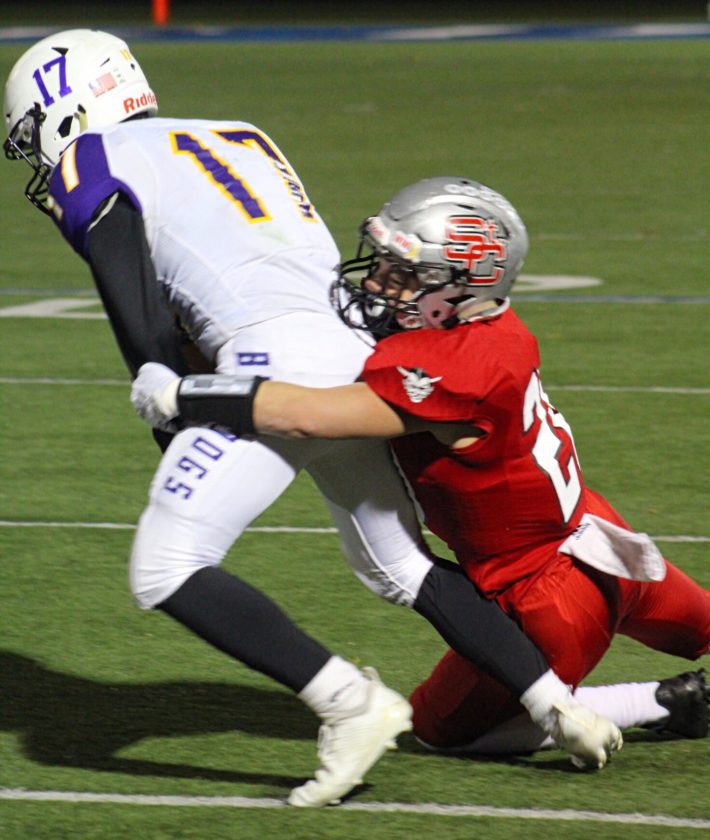 They being the St. Clairsville Red Devils.

The win catapults Coach Brett McLean’s team to next Saturday’s regional championship game — or the Elite 8 — against Newark Licking Valley back at Zanesville. This marks the third time McLean has directed a squad to the regional title game and first time since St. C. played for the state title in 2012.

“We’ll enjoy this win (Saturday night) and we’ll be ready to go to work (Sunday) as soon as we can and try to learn everything we can for the next one,” McLean said. “I won’t sit on this game very long because like I’ve said the most fun thing about this time of the year is learning all we can.”

The Red Devils racked up 422 yards of total offense with 356 of those coming via the rush and reeled off 27 unanswered points en route to their 12th consecutive victory.

“Each week is different, but we decided (during the week) that we were going to put our nose to the wall and run it and run it and run it,” McLean said. “It sounds like a broken record saying great job by the O line, the fullbacks and Brady, but it really was.”

While the Red Devils offense gains a lot of the attention, the defensive unit continues to shine and is doing so against high-powered offenses the last two weeks, especially.

To say St. Clairsville bottled up that offense wouldn’t be doing Ben Frye’s unit justice. After a flurry of back-and-forth scores that saw the game tied at 14 in the early portion of the second quarter, the Red Devils put the clamps down.

“It felt like if we could get one stop and one extra offensive possession, it would be a big lift,” McLean said. “When you’re playing unfamiliar opponents, you have to adjust fast to everything and I am just so proud of our defense again this week. Coach (Ben) Frye has done a great job of that all season and our defense is probably underrated and doesn’t get the attention that it deserves.”

From there, they came up with two interceptions, one by sophomore Tyler Tonkovich and the other by David Mellema, held on downs twice and forced a punt.

All told, the Bulldogs were limited to 186 yards of offense and Kuhns, who came with more than 2,000 yards passing, completed just 10-of-19 passes for 64 yards and a touchdown.

“I was proud of our how our defensive backs played,” McLean said. “This is two weeks in a row we’ve faced pretty good quarterbacks and again we had some interceptions and pass breakups. It was a good gameplan by Coach Frye and his staff.”

Meanwhile, St. Clairsville wasn’t being stopped at all when it had the ball. Actually, the Red Devils punted just once in the entire game and the only time they didn’t find the end zone in the first half was when they opted to kneel after Tonkovich’s pick to run out the clock.

Sandwiched between those was a whole lot of Brady Kolb and the Red Devils’ ground attack.

The senior workhorse continued to hear his number called early and often. He responded once again, too. Kolb carried the ball 44 times for 244 yards and scored four touchdowns, giving him an astounding 32 for the season.

It took Kolb just two plays to find the end zone and get things rolling for St. C. After the Bulldogs went three-and-out quickly on their first drive, St. C. responded with a two-play drive. Kolb carried for the final 45 after trucking a Bloom defensive back to spring it.

With the game tied at 14, Kolb scored on three consecutive possessions on a scoring run which stretched into the third quarter. He scored on runs 9 and 3 yards and then plunged in from a yard out.

The Red Devils also received a rushing score from senior quarterback Dustin Carrothers, who continued to manage the game well. He scored on a 34-yard dash, which McLean admitted was a busted play.

“Dustin did the right thing there after we missed an exchange,” McLean said. “We teach them to go where the hole is and he did that to make a nice play out of it.”

Freshman speedster Jacob Jordan capped the scoring on an 11-yard run in the fourth quarter.

Senior dandy Kyle Storer was a menace on the defensive side of the ball along with Justice McCamick from his defensive line spot. Storer also was solid offensively with 42 yards on seven carries.