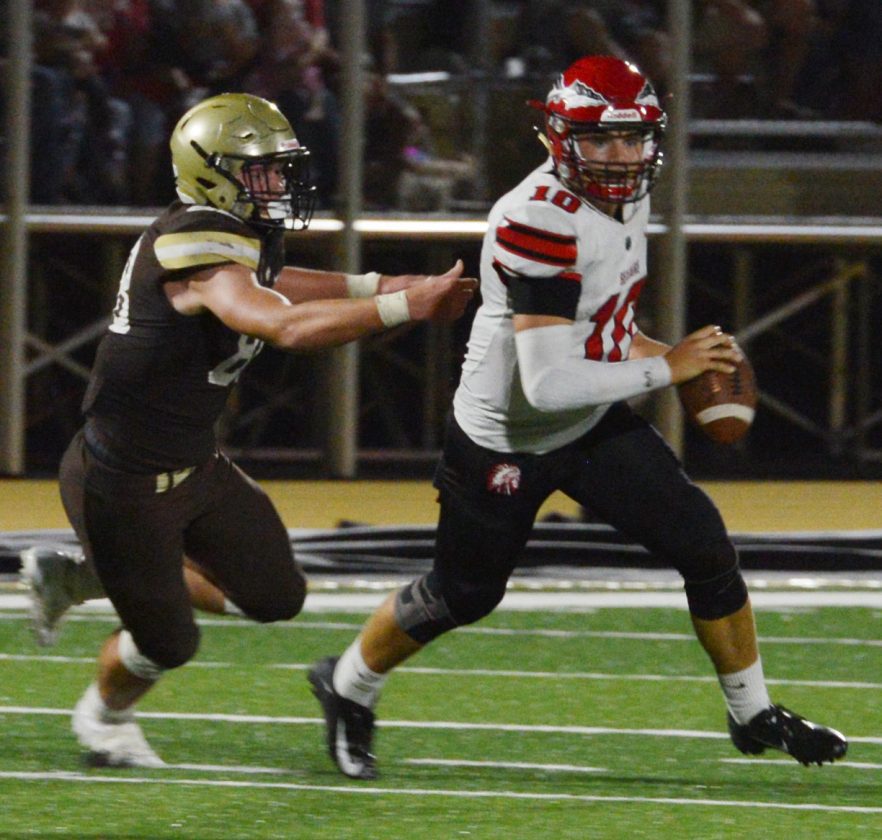 Photo/SCOTT MCCLOSKEY BELLAIRE QUARTERBACK Bobby Roth rolls out to avoid the rush from a John Marshall defender during Friday’s game in Moundsville. The Big Reds rolled to a 35-7 victory.

MOUNDSVILLE – With senior standout Cole Porter and the rushing attack bogged down in the first half, Bellaire turned to quarterback Bobby Roth to hit some big plays in the passing game against a good John Marshall defense.

The senior signal-caller did his part, setting up two touchdowns with long completions as the Big Reds grabbed a halftime lead and never looked back.

Bellaire’s offense finished with 283 total yards of offense, with Roth throwing for 133, and senior Trenton Wilson added a back-breaking 80-yard interception return as the Big Reds rolled to a convincing 35-7 victory over John Marshall at Monarch Stadium.

“Bobby (Roth) had a great week of practice leading up to (Friday) and made some great plays,” Head Coach Mark Spigarelli admitted. “But Trace (Sechrest) had a couple of big runs to get us going and Cole (Sechrest), Trenton (Wilson) and AJ (McCarthy) all did good thing.

“We had to do a little re-arranging on our offensive line this week, but the kids really responded and hung in there together.”

Neither team was able to mount much offense most of the first quarter, however, the hosts did take over at the Bellaire 40 following a punt late in the frame. However, that drive gained just five yards and stalled on a fourth down incompletion.

Taking over at the 35 the Big Reds (3-1) got the running game going thanks in large part to the fullback. Trace Sechrest busted off runs of 19 and five yards before leaving with an injury. Just four plays later his back-up senior Cody Albaugh went in from 17 yards away with just 57 ticks remaining. Cole Porter’s PAT made it 7-0. Spigarelli said afterwards tat Sechrest’s injury may be season-ending.

After Bellaire was stopped deep in its own territory midway through the second the Monarchs (1-3) took control at the enemy 36 and needed just one play to knot the count. Quarterback Justin Frohnapfel lofted a pass towards the end zone that Izak Babiczuk took away from the defender and rambled in for the 36-yard connection at 5:28. Ethan Gray’s point-after made it 7-7.

The remainder of the half belonged the visitors, who took over at their own 48 following a squib on the kickoff before Roth found Wilson for a 50-yard strike on the first play to put the ball inside the five. Roth covered the final yard two plays later at 4:31 to make it 14-7.

Bellaire extended it to a two-touchdown lead on its next possession needing eight plays to cover 58 yards with the big strike a 30-yard completion to McCarthy. After a 15-yard penalty Roth found McCarthy again, this time in the front of the end zone from 18 yards out at 1:15 of the half to push the lead to 21-7.

John Marshall’s defense, which was allowing just over 180 yards a game, allowed the Big Reds 178 in the opening half, most coming on big plays in the passing game.

“They loaded the box up against us and we started using the tight end to create some holes,” Spigarelli added.

The Monarchs offense moved the ball coming out in the third quarter, however, after getting to the Bellaire four they eventually stalled on downs at the five.

John Marshall was driving once again following an interception only to dig itself an even deeper hole when Wilson picked off a tipped pass at his 20 and raced 80 yards down the sideline as the advantage grew to 28-7 at 3:50 of the third.

Led by a 52-yard burst from Porter, which put him over 100 yards on the night, the Big Reds extended the lead to 35-7 on Kaleb Pitchford’s 13-yard burst with 14 seconds showing in the quarter.

“Our defense really did a good job in the third quarter with them in the red-zone twice,” Spigarelli added. “I was a little surprised they tried to throw it in from the five, but we hung in there.

“The second time they were down there Trenton (Wilson) made the big play on the pick, after missing an opportunity to get one earlier in the game.

“This is a nice win on the road, which all three of our wins have been. We go home now for three games and hopefully we can keep this going and play the way we are supposed to play and get back to Bellaire football.”

John Marshall Head Coach Jason Willis was happy with how his defense played, but still wants more from his offense.

“We haven’t finished drives all season and it happened against (Friday),” Willis commented. “Our defense played well and played physical, which it has all year. Coming in we knew we were going to need to make some plays in the passing game but we just didn’t do enough.

“I like how hard and physical we played, but we have to start putting everyting together.”

John Marshall was limited to just 181 total yards of offense, including just 30 in the rushing game.