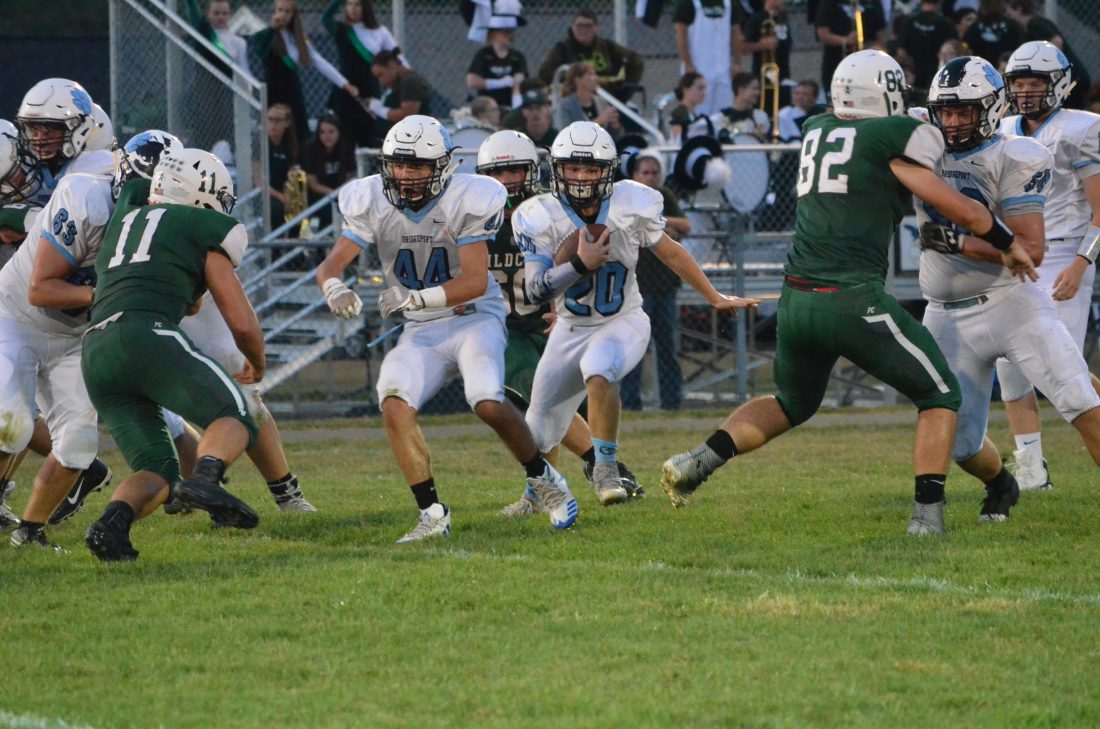 Bridgeport running back Joe Bugaj runs with the ball and follows the blocking of Cayden Williams during Friday's game at Paden City.

PADEN CITY — In a game that had more than 1,000 yards of total offense, it was a key special teams play midway through the fourth quarter that sparked Paden City to its first win of the Zach Heasley era, a thrill-packed 55-49 squeaker over visiting Bridgeport on the Berger Field grass.

“These kids about gave me a heart attack,” Heasley said following the high-scoring affair. “Oh my goodness.”

After Izaac Jozwiak weaved his way 74 yards for a Bulldogs touchdown that cut the Wildcats (1-3) lead to 42-35, Paden City’s Parker Higgins scooped up the ensuing kickoff at his own 18 and quickly returned the momentum back to the hosts. The 5-7, 145-pound sophomore followed a block that allowed him to turn the corner in front of the Bridgeport bench and he sprinted down the sidelines untouched for an 82-yard runback.

“That was huge because we were a little down after making a stupid play on defense,” Heasley recalled. “We eased up a little bit and gave up that long touchdown run, but Parker gave us the momentum back. That’s what you do as Wildcats, you fight … you fight.

“I’m so proud of these guys,” he added. “You figure we came in with high expectations and found ourselves down 60-6 in the opener. The second game we set a (W.Va.) state record for picks (interceptions). The third game we lost a heartbreaker we shouldn’t have lost. If that isn’t adversity, I don’t know what is.

“I’m so proud of the way these kids fought this week and how they fought in this game to get the win.”

Bridgeport shot itself in the foot on its next possession. Back-to-back penalties (illegal motion and delay of game) had the Bulldogs facing a first-and-20 from its own 27. Jozwiak picked up 25 yards but lost control of the ball fighting for additional yardage. Paden City’s Zane Yeater came up with the ball at the Wildcats’ 38.

Three plays later, Higgins found the end zone from 5 yards out. Cross made it 55-35 with the PAT kick.

Bridgeport, which had only scored 18 points in the first three weeks and none in its last two outings, scored twice in the closing moments on passes of 59 and 38 yards from freshman Colin Jackson to Jozwiak.

Cross accounted for 300 yards of total offense and five touchdowns. He ran 18 times for 184 yards and a touchdown while completing 7 of 9 passes for 116 yards and four more six-pointers. McKay caught three of the TD strikes among his five receptions for 39 yards, the longest being 9 yards. The others came from 5 and 4.

“You can’t complain about that,” Heasley said of Cross’s effort. Cross sat out last season after serving as a backup QB as a sophomore. “He struggled the first couple of weeks, but he is a competitor and once he gets it going, he’s pretty tough.”

Clayton Thomas also eclipsed the 100-yard mark for Paden City. The 5-9 senior rambled for 120 stripes and a TD on 21 totes.

For Bridgeport (0-4), Jackson passed for a career high 284 yards on 14 of 29 and three TDs. Jozwiak had eight catches for 247 yards and two scores while also picking up 103 yards on four carries and a score. Jon Bugaj rushed for 110 yards and pair of TDs before being injured midway through the third quarter. He did not return.

“Eighty percent of our team is young, but that’s no excuse. We battled. I’m proud of the guys, but we’ve still got a lot to work on.”

STEUBENVILLE — Although American Legion baseball has been sidelined for the summer, on both the national and ...

And then there were five. That is all that remains in the quest to be named the 2020 OVAC Coach of the Year, ...

WHEELING - A week ago we showcased many of the best prep baseball teams in the Ohio Valley. Now the spotlight ...

COLUMBUS — During much of the ongoing coronavirus pandemic, questions have far outnumbered the ...