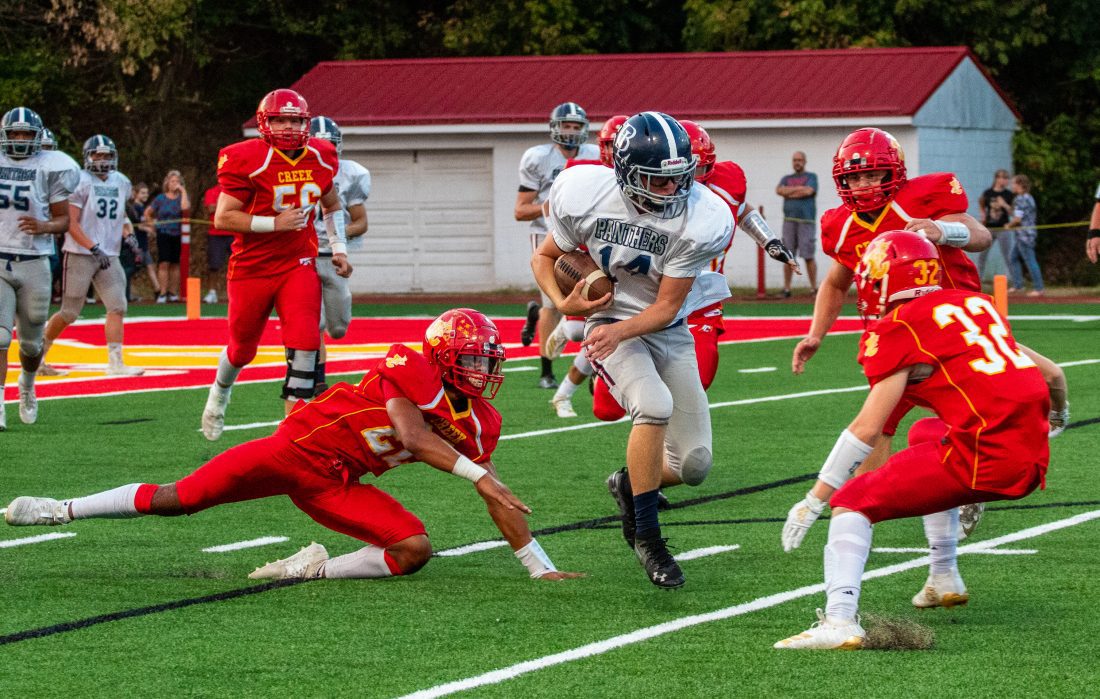 WINTERSVILLE – Sometimes the events unfolding on the football field can be overshadowed greatly by what is going on off of it. The Indian Creek Redskins found out shortly before kickoff Friday evening that assistant coach Mike Voltz, who had fallen ill last week, passed away. The Redskins were able to ride a workhorse effort from senior running back Trevor Fante, who had 16 carries for 185 yards and three scores, to a 43-6 victory over visiting Buckeye Local in a homecoming game that had much more behind it.

“I think our kids used what we stress, and that is that we are family. Sometimes family gets knocked down, but I thought they did a great job rallying around themselves, and going out and doing what Coach Voltz would have wanted us to do. I thought they put it in their heart, and they went out and played football,” stated an emotional Andrew Connor following the game. “I am proud of them because it had to be a very difficult, difficult thing as teenagers to do. They did it with class and they did it very well.”

“One thing that makes this valley special is that whenever there is. A moment when another school needs help from an outside community, they get it. Buckeye Local having that fundraiser today and donating money to Coach Voltz, that means a lot to us. That is a special thing about just being a member of the Buckeye 8 and being a member of the Ohio Valley, we rally around each other and I think we are teaching our kids that football is something we obviously want to do well at, but we are supposed to be teaching our kids life lessons, and today was a really tough life lesson for our kids. Even at the end Buckeye came with us and it shows kids can play hard, kids can be rivals, but football is an avenue for kids to grow up and take that and become better people. I think tonight demonstrated that both teams understood that and got that,”

“Moving forward, I think Indian Creek is a good program and possibly the best team on our schedule, so hats off to them.” noted Buckeye Local coach Roger Herbert. “First, I want to say we send our condolences. They had a tragedy happen today. As far as the game, I thought in the second half we moved the ball better, and some of that came with when they subbed some guys in, but we are kind of limited on numbers and kind of go with what we have. I think we only had 25 dress tonight, but out of 25 only 11 can play and we just have to keep battling and keep getting better.”

After trading possessions to open the game, it didn’t take long for Indian Creek (3-1) to get untracked, moving 43 yards on four plays, all on runs by Fante, who broke a 24-yard run while shedding would-be tacklers for his first score of the night. Creek used some trickery on the conversion as quarterback Sam Mazar came from his holder position to loft a perfect touch pass to senior back Tyler Smarella for two.

The Panthers (1-3) saw their next drive open with some promise when senior running back Charlie Smith broke a 21-yard rush on first down, however two plays later quarterback Seth Richardson’s pass attempt was snagged out of the air by Creek’s Matt Schaefer, who proceeded to rumble 41-yards to the end zone for a pick-six. Senior kicker Brandon Hiles split the uprights to put the hosts up 15-0

After forcing a three-and out, the hosts found pay dirt one more time in the opening stanza, as Fante bullied his way into the end zone again, this time from the two. This six-play drive that covered 54-yards was highlighted by a 36-yard dash by Schaefer to set the hosts up inside the visitors’ 30. Hiles’ boot put the hosts up 22-0 with mere seconds remaining in the first.

The stout Indian Creek defense forced another three-and-out and their offense mixed the pass and run masterfully with Fante runs bookending a pair of completions by Mazar. Fante’s second run of the drive was another 24-yard jaunt to the end zone. Hiles was true again for a 29-0 lead in favor of the hosts.

The Panthers were able to force a Creek punt, however the Redskins got the ball back on a defensive stand, exclaimated by a sack by Schaefer. Creek used tis drive to utilize a seven-play drive that was capped off when Smarella bounced off the line and found the engine on a sweet little six-yard run, Hiles’ placement put the hosts at a 36-0 advantage that stood at the half.

The second half, which was contested under a running clock saw both teams score. The Redskins appeared to have another pick-six when Fante made a nice move to grab an errant Panthers pass, however a block in the back on the return nullified the run. Still, back in business the hosts used a six-play drive that was capped off by Schaefer rushing the ball in form eight-yards out. Austin Herald converted the final placement of the evening.

The Panthers put together a four-play drive in the fourth quarter that was finished off by a beautiful pass from Richardson to junior receiver Brian Palmer Jr. from 15-yards out. The placement failed putting the score at the final total of 43-6 in favor of the Redskins.

Indian creek was led by Fante’s effort, while Schaefer contributed seven rushes for 49 yards. Both players were also all over the field defensively. The Panthers were led by Richardson, who put together an 11-15 effort at quarterback for 81 yards and a touchdown as well as one interception.

Indian Creek returns to action next week in a large tilt against undefeated, state-ranked St. Clairsville on the road, while the Panthers will host River View.