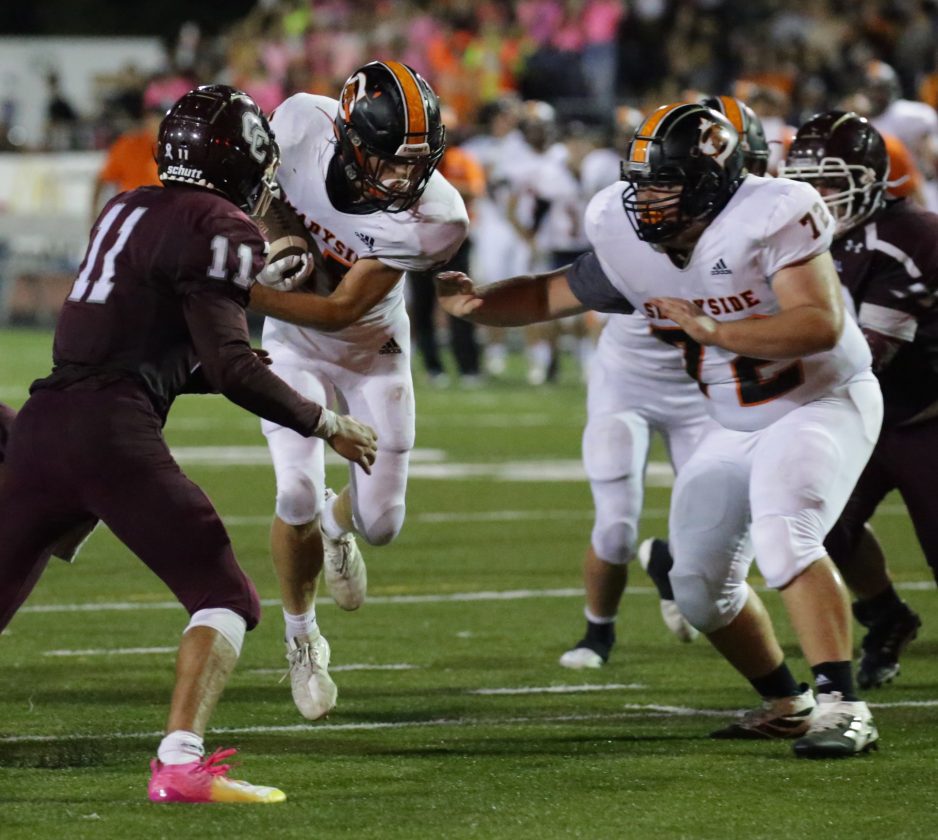 SHADYSIDE’S WYATT Reiman runs behind the blocking of Logan Crozier during Friday’s game against Wheeling Central at Wheeling University.

WHEELING — There is a reason Wheeling Central and Shadyside are two of the premier small school powers in the Ohio Valley.

When the two teams take the field, magic usually happens. And it did again Friday night on the campus of Wheeling University.

In what may turn out to be the Game of the Year in the Ohio Valley, Wheeling Central (3-1) answered a late Shadyside touchdown as Curtis McGhee III hooked up with Jalen Creighton for a 21-yard score with 35 seconds left.

Shadyside (2-2) drove down to the Maroon Knights 33, but quarterback Rhys Francis was sacked by Mason Smith on the final play and Wheeling Central won a thrilling 31-27 contest.

“I said going in that it was going to be a great high school football game and everyone got their money’s worth,” Wheeling Central coach Mike Young said. “Hats off to our kids. Our backs were against the wall after that fumble set them up to score.

“We didn’t panic and Curt did an unbelievable job of running the ball up and down the field, getting out of bounds, stopping the clock, not throwing the ball where it shouldn’t go. Caleb Ratcliffe made a great catch and everybody stepped up and did their thing.”

Following a Curtis McGhee 3-yard touchdown run with 10:17 remaining that put Wheeling Central up 24-19, the Maroon Knights had two chances to ice the game.

They drove deep into Shadyside territory but a fumble gave the ball to the Tigers.

Shadyside gave the ball right back on the next play as a trick play was intercepted by McGhee.

Shadyside stood its ground and forced the Maroon Knights to go three-and-out.

Then it was all Wyatt Reiman.

The Tigers’ bruising tailback had his best game of the season when his team needed him the most. The sophomore rushed for 133 yards and four touchdowns.

The highlight of his night came as Shadyside got the ball at its 23 with 3:56 left to go.

Shadyside fed its workhorse with seven straight runs, including a 21-yard burst up the middle for a touchdown with 1:34 remaining. He also added the two-point conversion and the Tigers were in front 27-24.

“Wyatt is a competitor and he ran the ball hard there,” Shadyside coach Mark Holenka said. “The line was starting to open up some holes for us. Maybe we abandoned the run too early prior to that.”

It was Wheeling Central’s turn to answer.

Less than a week after Linsly handed Wheeling Central its first loss, it was gut check time for the Maroon Knights. And there are few better to have in that situation than an all-state quarterback such as McGhee.

Central took over at its 30 and McGhee picked up a first down with his legs. Two plays later, he got lucky when his pass was intercepted, but the Shadyside defender came away with it out of bounds.

The next play, he rolled to his left and lofted a pass to Ratcliffe for a first down on 3rd-and-9 that went for 13 yards. It was Ratcliffe’s lone catch.

McGhee ran for 22 yards down to the 21 as Shadyside took a timeout.

The next play, McGhee stepped up and lobbed up a pass to Creighton, who fought off a defender near the Shadyside sideline. After wrestling away the ball, he made his way to end zone, just beating a defender to the pylon for a score. Jacob Rine’s extra point made sure a field goal wouldn’t beat them.

“We had a 1:30 left with one timeout and we had been in this situation before so I knew we were going to go down there and score,” McGhee said. “We refused to lose (Friday). That last drive we scored, we were pass heavy. The coaches made great calls and we didn’t panic. Giving a team like us 1:30 that is so electric is like giving us four minutes.

“My goal was to get the ball to Jalen and hopefully have him get out of bounds around the 5. But he shed a tackle and made a heckuva play. That is what he does all the time, make great plays.”

“Jalen just used his muscle and strength to get in the end zone,” Young said. “He was non-stop. He is a very good athlete and made three athletic moves to get into the end zone and I can’t say enough about how good he did.”

After returning the kickoff to the 47, Shadyside had 23 seconds to work with.

Francis hooked up with Kelly Hendershot and Jordan Joseph to get into Wheeling Central territory at the 33 with 6 seconds on the clock.

On the final play, he rolled to his right, but was met by Smith as the Maroon Knights defense stood tall.

“It was a good game, great for the spectators, bad for Shadyside,” Holenka said. “We were down there earlier and on the 2-yard line, got thrown back to the 5, then to the 10. We squandered that.

“Defensively, when you get the lead, you have to be able to hold it. Give Central credit. They have always been able to shift gears when they get behind and answer. Good teams answer.

“With 35 seconds, I knew it was going to be a monster challenge. I knew we could, but if it was 1:35, I definitely would have thought so.”

McGhee was stellar, rushing 29 times for 223 yards and four scores. Jordan Waterhouse also had a solid game with 140 yards rushing.

“We prepared, we prepared, and that is a very good football team over there,” Young said of Shadyside. “But we needed to win this one to get back on track after last week. This is a morale booster for us.

“Credit to our kids, I can’t say enough about our kids for how they stuck with it. Jordan Waterhouse ran his butt off and everybody came through and contributed it. We are back to being Wheeling Central football. We are not a passing team. A great evening to be a Maroon Knight.”