St. C. pulls away from Ferry 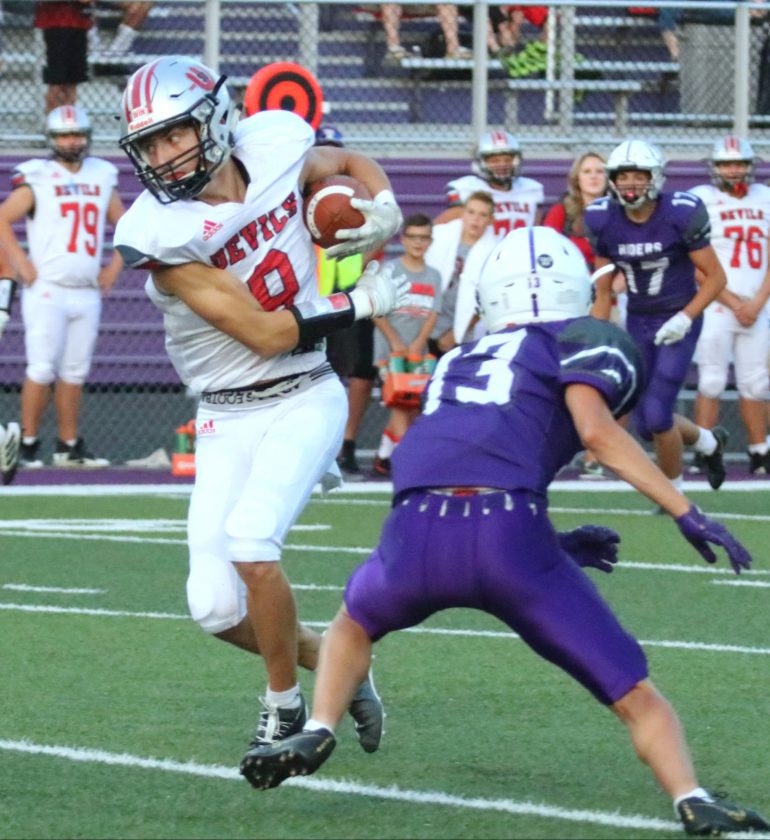 That changed rather quickly when the Purple Riders put up 20 unanswered points in 12-minute stretch of the first half to take a 20-7 lead.

It was evidently the wake-up call the Red Devils because they answered in a big way, scoring 34 of the game’s final 40 for a 41-26 victory.

“Martins Ferry came out ready to win and put us in a position where we learned something about ourselves and our character,” St. C. head coach Brett McLean said. “Were we going to wilt? Were we going to tighten up and let one go? Both could have been real easy, but our seniors pulled us out of it and gave us a little bit of spark.”

When the Purple Riders were gaining control of the game, St. Clairsville wasn’t doing much of anything well. It punted on three consecutive possessions, watched the lethal combination of Jake Probst and Dasyn Hores hook up on a 57-yard touchdown pass and then when it appeared to be gaining some traction, the Devils fumbled and Trevor Hanson scooped it up and raced it the other way for a 66-yard scoop and score.

“We needed something to be able to flip a possession to get some momentum going our way,” McLean said.

St. Clairsville made it a one-score game on the ensuing possession when Aaron Jordan, who finished with 126 yards, scored his first of three touchdowns from 10 yards out. Jake Bolyard’s second of five PATs was perfect. Ferry went three and out and St. Clairsville was right back it.

Junior quarterback Tyler Tonkovich, who was impressive with both his legs and his arm, ran for 26 yards on the next drive and then capped it when he found a wide open Collin Oberdick for a 30-yard touchdown. Bolyard’s PAT put St. C. on top with 2:25 to go in the half.

“Mental errors cost us tonight,” Ferry head coach Chas Yoder, who watched his team drop to 1-3, said. “I thought we played with (St. Clairsville), but we gave them a couple (of scores) in the first half. We gave a good football team a couple of easy touchdowns and it was still a one-point game at half.”

The Riders came out of the locker room and similarly to the first half, took it to the Red Devils. An impressive, 10-play, 65-yard drive was capped when Probst found Cody Olson from 7 yards out. Hanson had a 21-yard rush and Probst and Hores hooked up twice for 25 on the drive.

Unlike the first half, St. Clairsville was able to stem the momentum before it got rolling. The Devils did that with an 11-play drive that was a solid mixture of Tonkovich and Jordan operating mostly on the ground. Jordan capped the drive with a 1-yard plunge. A big play on the drive was a defensive pass interference, which extended the march. It was one of 11 penalties for 105 yards committed by Ferry.

“The drive (Ferry) had to start the second half showed the character of their team and the type of players they have,” McLean said. “We had to find a way to steal a possession and flop it in our favor. We answered and then got a stop, which was big.”

Once the Red Devils were able to get that possession advantage, they proceeded to lean on their big and talented offensive line. That meant a steady dose of Jordan, a little of Jacob Jordan and more Tonkovich on the ground. St. Clairsville, which came out throwing every down including the first touchdown, which was a 42-yard hookup between Tonkovich and senior Brett Vike, to throwing it just twice in the entire second half.

“In terms of depth, the numbers game was definitely in our favor,” McLean continued. “With this heat and humidity, we had the advantage as the game wore on because our kids were able to stay fresh.”

Yoder agreed that his team simply got tired in the second half and it led to missed tackles, includng one that turned into Aaron Jordan scoring from 15 yards out with 11:07 to play in the game. Jacob Jordan closed the scoring on the next St. C. possession with a 1-yard run.

“We have the talent (to be successful), but we can’t afford to give teams things,” Yoder lamented. “We have to play fundamental football and we didn’t do that. I am proud of how our kids fought and St. Clairsville’s a good football team.”

Tonkovich finished his solid night with 139 yards passing and 68 rushing. Probst was 12-of-23 passing for 192 yards. Hores caught 6 passes for 146 yards and a touchdown. Hard-nosed junior Chase Goff led Ferry with 73 rushing yards.