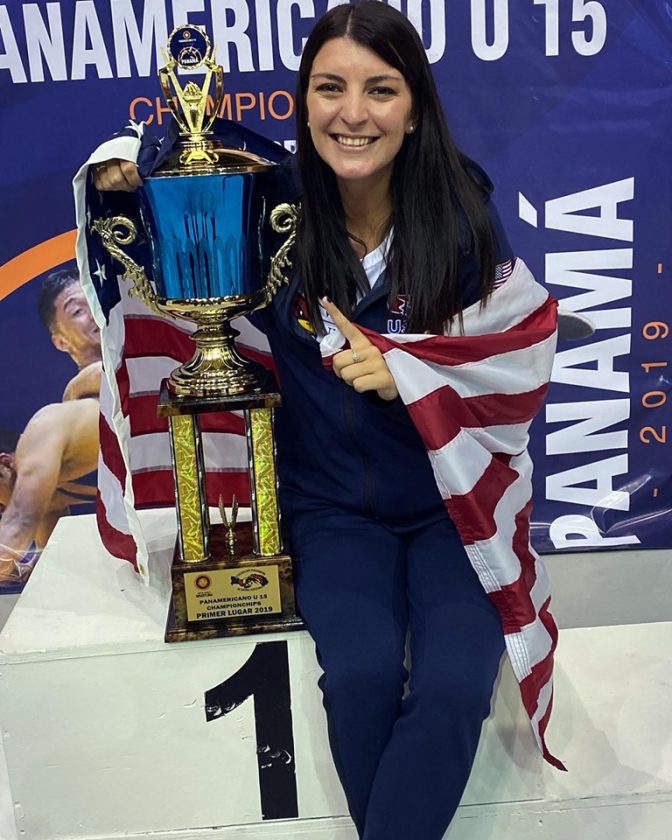 Photo Provided BUCKEYE LOCAL grad Jess Battilochi sits with the American Flag draped around her after the PanAm Championships recently where she served as an athletic trainer for Team USA.

The Wheeling University athletic trainer recently spent a week with the 15U boys and girls teams at the Pan American championships in Panama City, Panama.

To say the teams were successful would not be an understatement. The boys swept the nine weight classes in both freestyle and greco, while the girls claimed seven golds, a silver and two bronze.

“It was an amazing trip. The guys went undefeated. The girls went 7-1-2 in their 10 matches,” Battilochi said. “The team success was unbelievable. We won the tournament by about 275 points.”

The International competition, Battilochi’s first, was like a working vacation. She was only called upon for minor injuries such as bloody noses while getting a chance to see her second country. She had previously visited China with the U.S. Senior Women’s team.

“The experience was top-notch. The staff I got to work with was amazing,” she raved. “The things we got to see down there were unbelievable. We went to the Panama Canal one day as a team. We were down there for Dia de los Muertos, which is Day of the Dead, where they celebrate their loved ones. So we went to a grave yard to see that. It was a really cool experience.

“The people were so friendly. The parents, the coaches. It was unbelievable.”

The Buckeye Local graduate said the competition was good.

“There were 12 countries. It ran pretty much like a normal wrestling tournament, not much different. Smaller event than I’m used to.”

The best part of her trip came at the end during the team’s celebration.

“Chills. After seeing the kids run around the mat with the flag draped over their shoulders, and then to hold that trophy up and put the American flag over my own shoulders, there’s no words to describe how awesome that was,” she recalled as goosebumps formed on her arms.

“Without wrestling this winter I’ll be covering men’s basketball, but I will be catch some former Cardinals wrestling when I can,” she explained. “There were a couple of tours I could have went on but couldn’t because of work and stuff, but just being asked and thought of for more is really awesome,” she allowed. “Hopefully, if more pop up maybe I’ll be asked.

“It was amazing to see what these kids were able to do now. I can’t wait to see how they do in the future,” she advised. “The future of USA Wrestling is bright.”