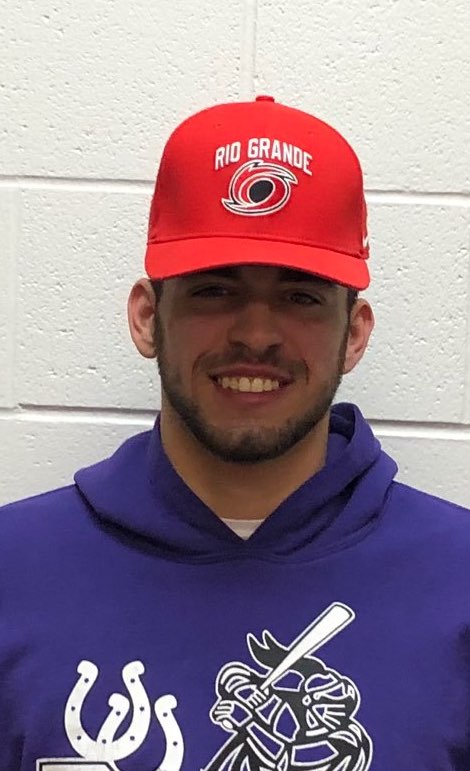 MARTINS FERRY — Jacob Probst knew what he was looking for in a college — both academically and athletically — at a relatively young age.

What the current Martins Ferry senior didn’t know, however, was that his future college home was a place he visited as a freshman.

Probst recently signed his letter of intent to continue his academic and baseball careers at NAIA member Rio Grande College.

“I fell in love with the area the first time I visited Rio Grande,” Probst said. “It’s situated in southeastern Ohio with an enrollment of 2,300 students and that smaller setting really appealed to me. Plus, it’s a school that has a rich tradition both academically and athletically.”

Probst, who recently completed a brilliant football season for the Purple Riders, is excited to have the college selection process out of the way, allowing him to focus on the upcoming baseball season.

“I am able to just go out, play and have fun,” Probst said. “When you can just go out and play, it really takes the pressure off.”

For the fourth consecutive season, Probst will be a starter at shortstop for Coach Anthony Reasbeck’s team. He’s led the squad in hitting each of his first three seasons, including a solid .448 in 2019. He hit .510 as a sophomore and .394 as a freshman.

On top of that, he’s also led the Riders in runs batted in all three years.

“It’s been an amazing ride thus far,” Probst admitted. “I am really looking forward to the upcoming season and competing. It’s been a career that I’ll never forget, so far.”

With his on-field success, plenty of accolades have followed for Probst. He’s been named all-OVAC, all-Buckeye 8 and all-Valley twice. He’s a three-time honoree on the all-Eastern District and all Times Leader squad. He’s twice been named to the Prep Baseball Report all-Ohio team, including a second-team selection as a sophomore.

“Jake is one of the best offensive baseball players I’ve coached,” Reasbeck said. “He’s played shortstop in plenty of big games for us. Rio Grande is getting a really good baseball player and an even better competitor.”

Though Probst has been a middle infield for the bulk of his career, he’s flexible for when he arrives at Rio Grande.

“I can see myself playing any position on the field,” Probst said. “I have experience playing in the outfield and I believe I have the skillset and ability to be utilized wherever I’m needed to help the team.”

In joining a program that was 39-21 last season and won its league to qualify for the national tournament, Probst knows he must continue to hone his skills.

“I have to continue to improve on making contact on breaking pitches,” Probst said. “I need to be able to read those pitches quicker, at the release point, which will enable me to make better contact. I need to remain consistent at the plate and continue to focus on driving the ball into the gaps.”

” We are extremely excited that Jacob has committed to the University of Rio Grande. He is a very gifted athlete that has potential to have an immediate impact in our program,” Warnimont said. “Jacob is a middle of the line up bat that we expect big things from once he gets acclimated to the speed of the college game.”

The opportunity to play for Warnimont was another key part of Probst’s decision.

“When I first met Coach Warnimont, I knew this was a coach I wanted to play for,” Probst said. “He’s an old-school type of coach, which I love. He demands hard work and accountability, which is something that was instilled in me at a young age. Rio Grande is a hidden gem that’s unknown by many people, but it’s a special place.”

Along with his baseball success, Probst was impressive at quarterback, too.

He earned all-OVAC, all-Buckeye 8, all-Times Leader and all-Eastern District as a junior.

Jacob, who is the son of Tom and Mary Jo Probst, plans to major in education.