• Martins Ferry ends season with a cherished victory over Bellaire, 23-12

BELLAIRE — When members of the Martins Ferry football team awoke Saturday morning, they discovered they had been eliminated from playoff contention. That didn’t stop the Purple Riders from keeping arch-rival Bellaire from hosting a playoff game in week 11.

Martins Ferry used a balanced offense and a ballhawking defense to post a 23-12 victory over the Big Reds in the 114th meeting on a picture-perfect Saturday afternoon at sun-splashed Nelson Field.

With the cherished triumph, head coach Chas Yoder’s squad retained the coveted SPARKY Trophy and closed the all-time series to 54-53-7.

“We played a great game. Bellaire’s a great team, but we knew what we were capable of,” Martins Ferry (6-4) head coach Chas Yoder said. “We started the season slow, but I feel we really picked it up in the second half (of the season).

“It feels great to keep the SPARKY Trophy,” Yoder revealed. “They beat us last year in the playoffs after we beat them the week before, so this was a little redemption for us. I’m really happy for our seniors.

“I thought overall that we had an awesome team effort.”

Seven plays and 21 yards later, senior quarterback Jacob Probst found classmate Dasyn Hores on a crossing pattern from the right. The Purple’s leading receiver caught the ball at the 5 before bulling his way over a defender at the goalline to complete the 14-yard scoring connection. Cody Olson’s placement made it 7-0 with 8:06 on the clock.

The Big Reds (7-3) used a blocked punt of their own to get on the scoreboard. Connor Rosen broke through to bat the ball away and then fell on it at the 8. Three plays later, Cole Porter raced around his left end from 2 yards out. However, the PAT came up short as Martins Ferry led, 7-6, with 2:57 remaining before the half.

Martins Ferry took the second-half kickoff and drove 66 yards on half-a-dozen plays. Chase Goff capped the nearly three minute drive with a 5-yard run off the left side of his line. The PAT was wide right as the Purple Riders held a 13-6 advantage.

Sparking the drive was a 46-yard hookup from Probst to wideout Cody Olson on the first play from scrimmage.

“We lost Logan Smith in the first half (possible concussion) and we told the other receivers that we needed someone to step up. Cody did just that,” Yoder said of Olson, who caught five passes — all in the second half — for 118 yards. The senior also picked off a Bellaire pass late in the third quarter, and sealed the deal with a 21-yard field goal with less than a minute left to play.

Olson said the coaches told him at halftime that they were going to need him.

“Our coaches saw that they were doubling Dasyn so they wanted to utilize me more. They saw a mismatch with me and told me at halftime that they were going to send it to me on a post pattern. Jacob delivered it to me.”

It looked as though the Purple Riders were going in for another score in the third quarter, but Goff was stopped short on a fourth-and-1, giving the Big Reds the ball back at their own 22.

On Bellaire’s second play, Olson picked off a Heatherington pass near midfield. Two snaps later, Probst threw a perfect pass that Hores caught in the end zone despite double coverage for a 35-yard scoring hookup. Olson banged the extra point through for a 20-6 reading.

The Big Reds closed the gap to 20-12 when Heatherington found Trenton Wilson in the left corner of the end zone from 5 yards out. The two-point pass failed.

Bellaire’s defense stopped Martins Ferry on its next two possessions, forcing punts. However, the second one was muffed and Goff recovered at the Big Reds’ 7. That resulted in Olson’s fourth field goal of the season.

Probst completed 8 of 18 passes for 140 yards and two TDs. Goff, who had a 45-yard halfback pass to Olson, finished with 48 yards rushing on 23 carries.

“It feels pretty good. I’m glad about the win but it’s upsetting that we didn’t make the playoffs,” he said. “I’m only a junior, so better luck next year.”

Porter ran the ball 26 times for 64 hard-earned yards. Heatherington finished 7-for-16 for 75 yards.

“Hats off to Martins Ferry. I think they were probably more aggressive than we were. I was kind of worried about that,” Bellaire head coach Mark Spigarelli said. “That No. 55 (Evan Carpenter) is a machine. I told the kids all week that he was going to be like that, but we had our chances.”

The 6-2, 210-pound Carpenter, who had several bone-jarring hits, was all over the field.

“I’ve got to give a shout out to my man (No. 55) Evan Carpenter,” Goff said. “He’s a beast. Trevor Hanson had like six (quarterback) sacks that I saw. he played a great game.”

Yoder wanted to thank the Purple fans for their support.

“I think we had more fans than they had. That was awesome and our kids definitely feed off of that,” Yoder complimented of the Purple fan base.

Despite the loss, the Big Reds will be playing next week on the road in the Division V, Region 17 playoffs.

“I love these kids to death. They’ve done a super job for four years,” Spigarelli said of his 20 seniors. “I’ve got 64 kids that I’ve got to go in (to the lockerroom) and tell them they have to forget about this game. Now we have to go play South Range on the road, which isn’t a bad thing because we’re still in the playoffs and we got second in the OVAC (Class 3A).

“I know the sun will come up tomorrow (Sunday) and things will get better for these kids, too.” 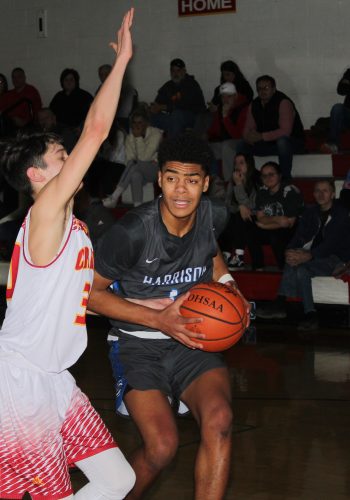 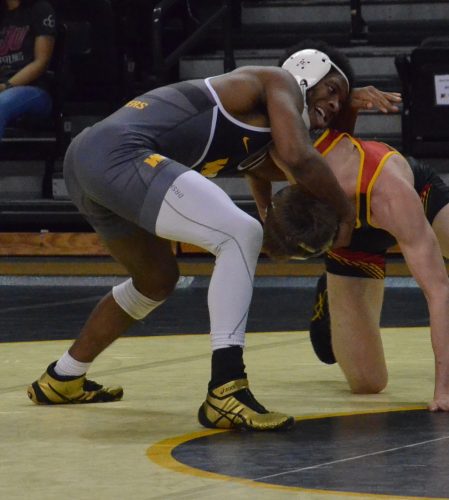 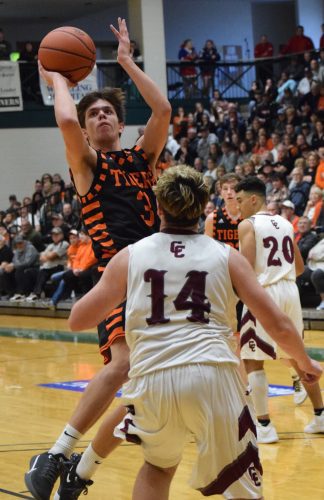 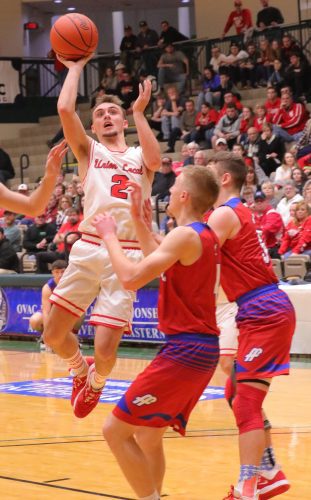