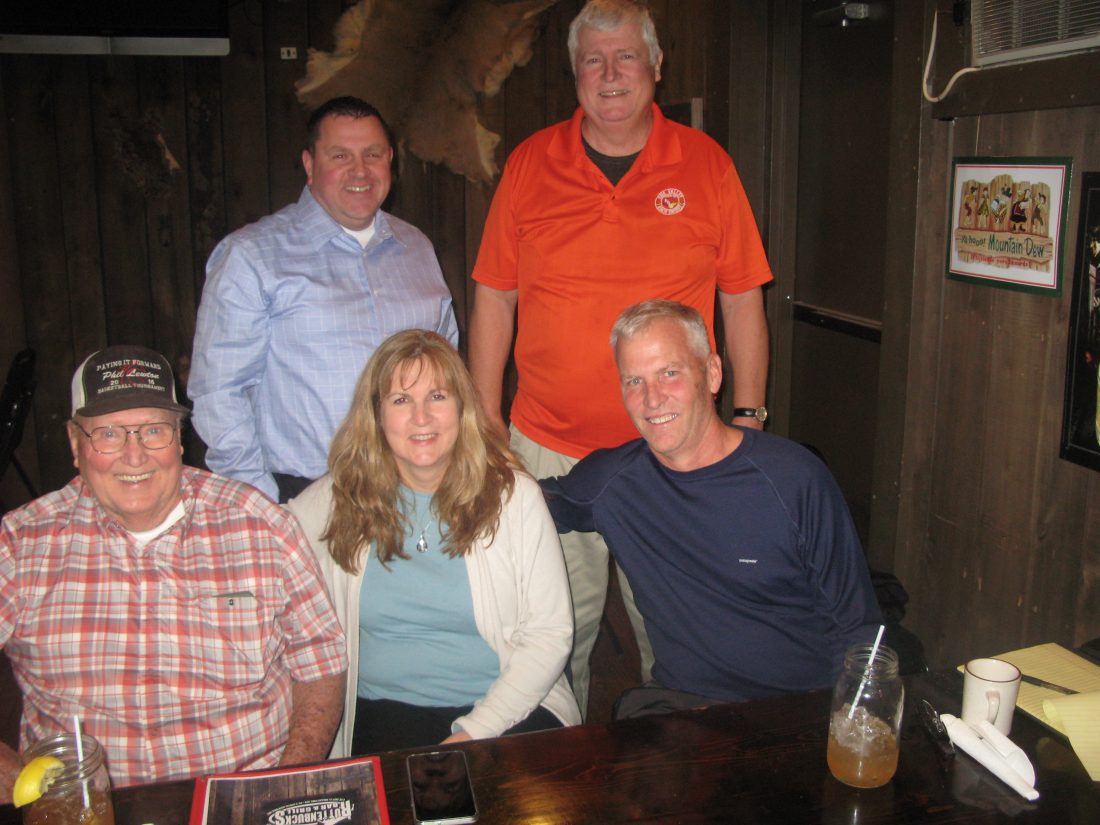 SHOWN MAPPING plans for the “Phil Lewton Sportsmanship Award” are, sitting, from left, Fritz Lewton, Sue Lewton and Don Cash. In back, from left, are basketball officials Chris Schubert and Bob Cain.

WHEELING – Sportsmanship. It is a quality that is all too often lacking these days in athletics.

Fred “Fritz” Lewton is stepping up in the most generous of fashions to bring sportsmanship to the forefront for OVAC basketball teams.

Lewton, who resides near Dallas Pike, is the father of Phil Lewton, a former prep and college hoop star who went on to become one of the premier basketball officials in the Ohio Valley for more than 30 years. Phil died at age 57 in January of 2016 after a brief illness.

To pay tribute to his son while also shining a bright spotlight on the importance of sportsmanship, Fritz has endowed a new and impactful award for OVAC hoop teams.

“The Lewton family knows the importance of the role of sportsmanship in high school athletics and have partnered with the Ohio Valley Board of Approved Basketball Officials (OVBABO) to create the “Phil Lewton Sportsmanship Award,” said Don Cash, one of the top officials in the Ohio Valley and a close friend of the Lewton family. “The award is named in Phil’s honor and will go to one boys’ and one girls’ team that display the qualities of sportsmanship. Those qualities will include the sportsmanship of the team, coaches, fans and school staff.”

The winners will be determined by a selection committee of the OVBABO.

One girls’ and boys’ team will each win a $2,500 cash award to be used as they wish in their respective basketball programs.

“We hope that this will promote sportsmanship at all levels,” Fritz Lewton said.

A committee to monitor the Phil Lewton Scholarship endeavor has been established, consisting of veteran and highly respected basketball officials. Cash is chairman of that committee.

“We came up with the parameters. We have discussed when to give out the award,” he added. We have considered the OVAC All-Star Game, the OVAC championship games or the last home game of the regular season, so they can be recognized before their own fans and team.”

After his stellar prep career with the Triadelphia Little Reds, Phil starred at West Liberty and Wheeling College, earning him two NBA tryouts. He is also the all-time leading scorer in the prestigious St. Vincent’s basketball tournament.

“When he refereed Phil was always calm and cool-headed. He was that way even outside of basketball,” said his widow, Sue. “Hopefully this award will help let kids know they are all basketball players and people are watching how they handle themselves.”

Lewton was more than just basketball. He was a people person. A man who individuals gravitated to.

Cash was a close friend to Phil and his family. He remained vigilant throughout the final weeks and played a key role in many of the fundraising events to assist the family.

“Phil was a great basketball player but he also was a phenomenal athlete in every sport. He was a 3-handicap golfer, great dart player and excellent at playing pool,” Cash said. “He was a tremendous softball player. He pitched us to the state title one year.

“Phil could do anything — skilled carpenter, electrician and block layer,” he continued. “If you were Phil’s friend, he was loyal to you, he would help you and he was your friend forever, and that list of those people is so, so long.”

While Fritz Lewton, age 83, is funding the award, it is also a cause that will likely spur donations from the public and business sectors. Phil’s demeanor and willingness to help anyone will hopefully galvanize contributions.

“We need to get the word to the fourth and fifth graders. That is where sportsmanship begins,” Fritz said. “It was so easy to raise Phil. I could have raised 10 Phils. We appreciate the fact that we can do something in Phil’s name.”

I FELT Ohio State was deserving of the No. 1 spot in the college football playoffs. The Buckeyes won three straight emotional games against Penn State, Michigan and Wisconsin. That was no easy task. The winner of the Ohio State-Clemson semifinal will be your eventual national champion.

ELIJAH BELL and his North Carolina A&T teammates will be playing in the Celebration Bowl in Atlanta on Dec. 21 against Alcorn State. The Wheeling Park product hauled in 49 passes for 720 yards and 5 TDs this fall. Bell is the all-time reception leader for the A&T with more than 200 grabs.

KUDOS TO Mike Young and his Wheeling Central football team for their lengthy and amazing trek to another state championship. Traveling more than 1,200 miles is one achievement, winning four playoff games without your star quarterback is another. Jacob Rine cannot get enough credit for stepping in for Brown-bound Curtis McGhee III and performing at an MVP level in the finale.

PHIL BLEDSOE is enjoying a strong start to the season at Glenville State. The former Wheeling Park all-stater has been twice named the Mountain East Conference Player-of-the-Week. The 6-6 forward is averaged 23 points and 10 rebounds for the 7-2 Pioneers. Bledsoe is coming off a 31-point, 13-rebound effort in a win over Frostburg State.

THE OVAC classifications for the 2020-21 school year have been released with several changes. The two that caught my eye were Buckeye Local moving down to 3A while Steubenville Catholic Central drops to 1A.

JIM CRUTCHFIELD’S Nova Southeastern hoopsters are off to another sparkling start. The former West Liberty University coaching great has guided his Sharks to a 6-0 getaway. Making things even sweeter is the fact Nova Southeastern is now the No. 1 rated NCAA Division II team.

GOOD THINGS come to good people. WVU offensive tackle Colton McKivitz is one of the most humble and classiest athletes I have ever had the privilege to cover in my real as a sports scribe. It is only fitting the Union Local product capped his sparkling collegiate career by being named a second-team Walter Camp All-American.