BELLAIRE — Martins Ferry didn’t waste any time Thursday night in showing Bellaire that its time as top dog in Buckeye 8 girls’ hoops might be in jeopardy.

The Purple Riders belted the Big Reds with a bevy of haymakers early, jumping out to a double-digit lead after one quarter, before finishing things off with a 19-5 spurt.

The end result was a convincing 65-46 triumph giving the visitors their first victory vs. their Ohio 7 rivals in more than four years and a much-needed confidence boost following a rugged three-game stretch to start the season.

“This was a good win for us,” acknowledged Martins Ferry head coach Dave Reasbeck. “That’s two in a row for us. But we have a short turnaround with a trip to River on Saturday afternoon.”

Spielvogel muscled her way to nine first-quarter points as Martins Ferry, which split its first two games with Shadyside and Beaver Local, went on a 15-4 run after spotting the Big Reds a 3-2 lead on the first of five Davis triples.

Davis, the 5-2 point guard, posted 36- and 37-point outings this past week as the Big Reds won their first two games. But she was held to five in the opening period Thursday as the Purple Riders took command.

She caught fire in the second, however. With Spielvogel on the bench, Davis sparked a 11-2 run that brought Bellaire to within four — 28-24 — with less than three minutes left in the half. She finished with 13 in the period.

“We always had the lead,” Reasbeck surmised. “But, when we’d get comfortable, she would come down and make a 25-footer. But, that’s what good players do.”

Trailing by seven at halftime, a Davis jumper and a free throw by Tayah Frazier trimmed the Big Reds’ deficit to three.

Martins Ferry answered with six straight points, the final four coming off the hand of Maria Clark, who scored six of her eight points in the third. Her last bucket — a 3 — put the Purple Riders up double-digits again, a margin Martins Ferry held until late in the period.

Davis scored five straight points making the score 46-41 with 63 tickets left in the third. But with 32.4 seconds left, Ferry’s Maddie Ging went down in pain after hitting her head on the court.

Ging was tended to by medical personnel for about 15 minutes before being whisked away by an ambulance. Following a short warmup, action resumed. And when it did, the Purple Riders put the game away.

“We finished great,” Reasbeck said. “When Maddie got hurt, we kind of rallied the troops. Everybody had to pick up the slack. (Maddie) does a lot for us.

“Everyone, 1-9, they all picked up the slack. We played an outstanding fourth.”

Bellaire head coach John Farrier thought his team had an opportunity to finally pull even as the third came to a close, but credited the Purple Riders for slamming the door on his team.

“At the end of the quarter, I thought we could get it down to two or three,” he said. “Then I’m looking up and it’s a 10-point deficit or something right off the bat. That was a tough swing there.”

One, he hopes, his team can learn from as the season moves along.

“We don’t want to get too high on the wins or get too low on the losses,” Farrier, whose team is off until next Thursday at St. Clairsville, said. “They got a lot of second and third chances, that’s one thing we need to shore up.

“We’re not a big team, but we can still be fundamental and make sure we’re boxing out and do a better job on that end. 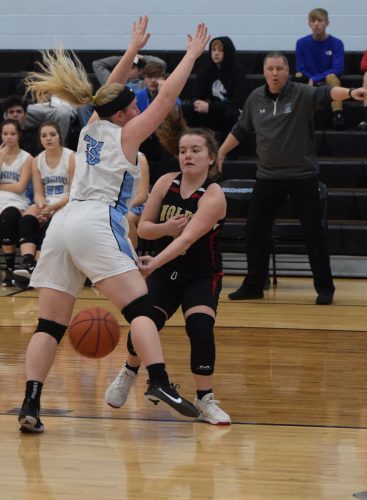