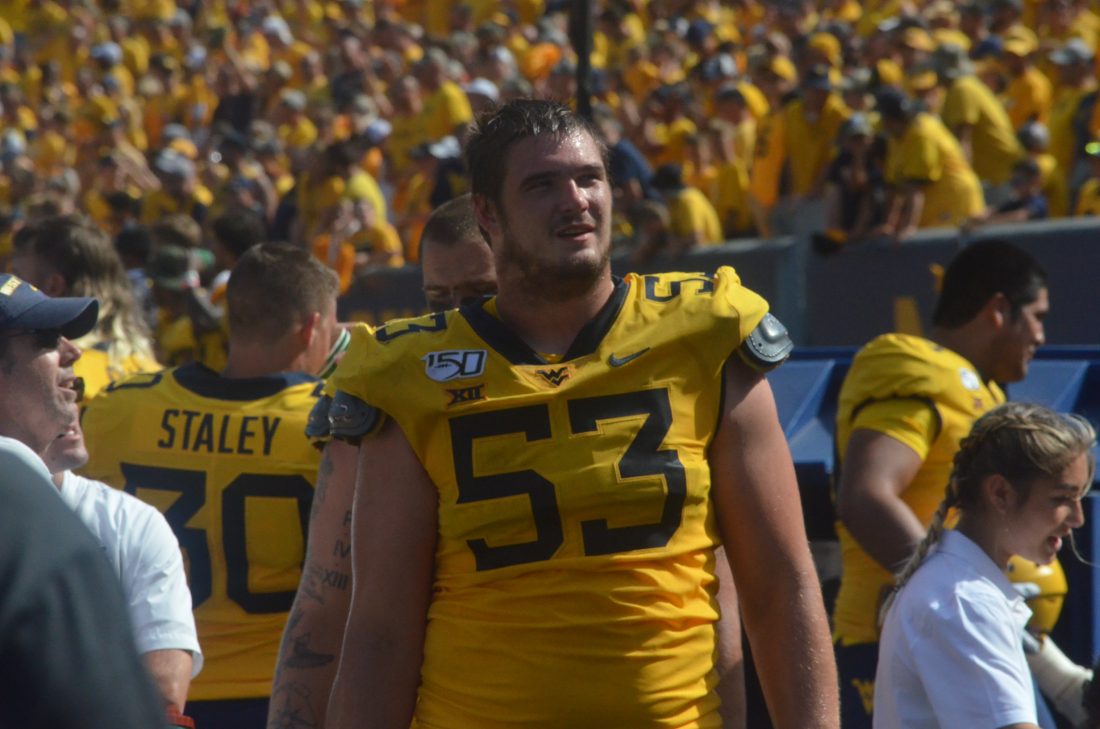 MORGANTOWN — Colton McKivitz had just wrapped up dinner with his parents — Matt and Wendy — Wednesday afternoon and was ready to get on the road back to Morgantown when he took a quick glance at his Twitter account.

The former Union Local High School standout and now former Mountaineer football player did a double take as he looked down at his phone and quickly went to see if he could catch up to his parents before they left the parking lot.

McKivitz had just learned that he had been named First Team All-Big 12 and also the co-recipient of the Big 12’s Offensive Lineman of the Year Award. Both were announced Wednesday by the conference.

“I quickly flagged my mom down, she got out and we kind of shared the moment together in the parking lot of Cracker Barrel (in St. Clairsville),” McKivitz said.

McKivitz had been in the Ohio Valley for a few days following the Mountaineers’ season-ending victory at TCU last Friday, allowing him and his fellow seniors to go out with on a high note after a tough 5-7 season.

“It was a great feeling to be able to win my last game,” McKivitz said. “Obviously, 5-7 wasn’t what we had planned, but we showed some character and resolve in how we finished with wins over Kansas State and the TCU game.”

McKivitz becomes the second consecutive Mountaineer left tackle to earn at least a piece of the lineman of the year award. Yodny Cajuste, who is now playing for the New England Patriots, was the winner last year. That made it even more special for McKivitz.

“After learning (left tackle) from him and playing with him, I wanted to achieve what he did,” McKivitz admitted.

Obviously, McKivitz is a team-first guy and would trade any of the individual accolades for the opportunity to play in a bowl game, but he would be lying if he said he wasn’t extremely proud of his own achievements, too.

“It’s always nice when you accomplish some of your pre-season goals,” McKivitz explained. “Coming into the season, I wanted to be first-team All-Big 12 because, honestly, being honorable mention the last two years hurt a little bit.”

Honestly, McKivitz didn’t know what to expect in the way of post-season accolades because there were times when the Mountaineer offensive line was heavily scrutinized.

“We didn’t run the ball well all season,” McKivitz said. “But, I guess the film spoke for itself and people saw me as a physical, dominant player, which is what I wanted to do each week.”

McKivitz is back at WVU for a few days, collecting some of his belongings and having a few meetings with the Mountaineers strength staff, developing a plan for workouts as he begins the process of looking toward the next chapter of his football life.

“The playing for fun is kind of over now,” McKivitz said. “The amateur part of football has come to a close and it’s definitely the business part of it.”

According to McKivitz, he and his family are inching closer to finalizing his representation and after spending Christmas at home in Centerville, he will formally begin the process of working toward April’s NFL Draft.

“My mom is pumped because we’re going to spend Christmas together as a family,” McKivitz said. “Then, the first week of January, I am leaving to train, probably in Dallas.”