Monroe makes it 3-0 with a win over rival River 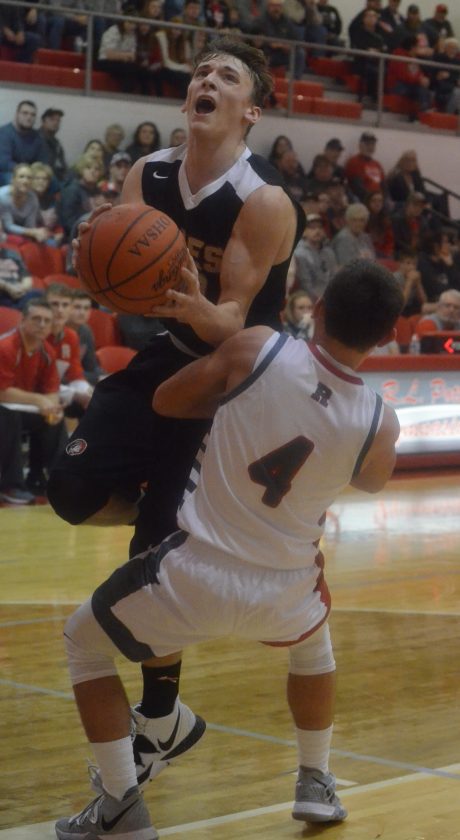 HANNIBAL — After matching each other bucket for bucket for most of the first three quarters Friday night, county rivals River and Monroe Central become locked in a defensive tussle in the fourth.

There, the Seminoles took advantage of every possession, every loose ball, every rebound, outscoring the Pilots by one in the period, preserving a 50-48 boys’ basketball victory.

Monroe Central now has won two straight inside the R.L. Potts Gymnasium and stands at 3-0 on the young season, following home triumphs against Bridgeport and Toronto.

“River is a great program,” Seminoles head coach Jon Perkins pointed out. “So, to come down here and come away with a victory is a blessing.

“I told our guys (following the game) that if they play together and they play for each other, that’s what matters. You start to win games when that happens, when you’re not worried about what’s in the box score and playing as one.”

Monroe Central rallied from 10 down late in the first half, then carried a one-point lead into the fourth. There, the Seminoles continued to squeeze the life out of a River offense that tailed off as the game progressed.

“They got up on our shooters a little bit,” River head coach Mark Romick explained. “We had a little bit more freedom in the first half. We had a lot cleaner looks.

“We still had guys with clean looks in the second half. We had some open people, we just didn’t recognize it.

“I don’t think we moved the ball very well in the fourth quarter. If you don’t move the basketball and share the basketball, you’re going to be in trouble.”

Ty Long, who paced the Pilots with 12 points, gave the hosts the lead at the start of the fourth, making the score 42-41.

But Luke Burkhart (10 points) answered quickly, draining a jumper that ignited a 5-0 spurt, putting Monroe Central up 46-42 with about 5:40 remaining.

Brody Lollathin made the score 46-44 with a pair from the stripe with 4:11 left. The score stayed that way until Talin Babcock drove in for a layup with 3:20 on the clock, putting the Seminoles up four.

Following a River timeout, Michael Johnson’s layup made the score 48-46.

Both teams missed a pair of offensive opportunities during the next 2-plus minutes. Eventually, Burkhart was sent to the line with nine ticks left for a 1-and-1. He made both. Lollathin hit a jumper as time expired, but it was moot.

“Hats off to my kids,” Perkins said. “They hustled their butts off and they played hard. They did all the things they needed to do.

Babcock went down hard with about 2 minutes left in the third and headed to the bench. He returned as the fourth began and finished with a game-high 21 points.

“He leaves everything on the floor,” Perkins said. “He’s out to prove that he can lead this team by example, and not just by words. He comes to practice every day with his hard hat on. His energy is contagious to the other guys.”

Auston Hogue added 11 points for Monroe Central, including a 3/4-court heave to end the first, who welcome Linsly on Tuesday.

Colton Lawrence tacked on 11 points for the Pilots, who welcome Magnolia, also Tuesday.

WHEELING - Time flies when you are having fun. Living your dream. Both sayings have served me well. My dream ...