Powell goes off again to lead Barnesville past St. Clairsville 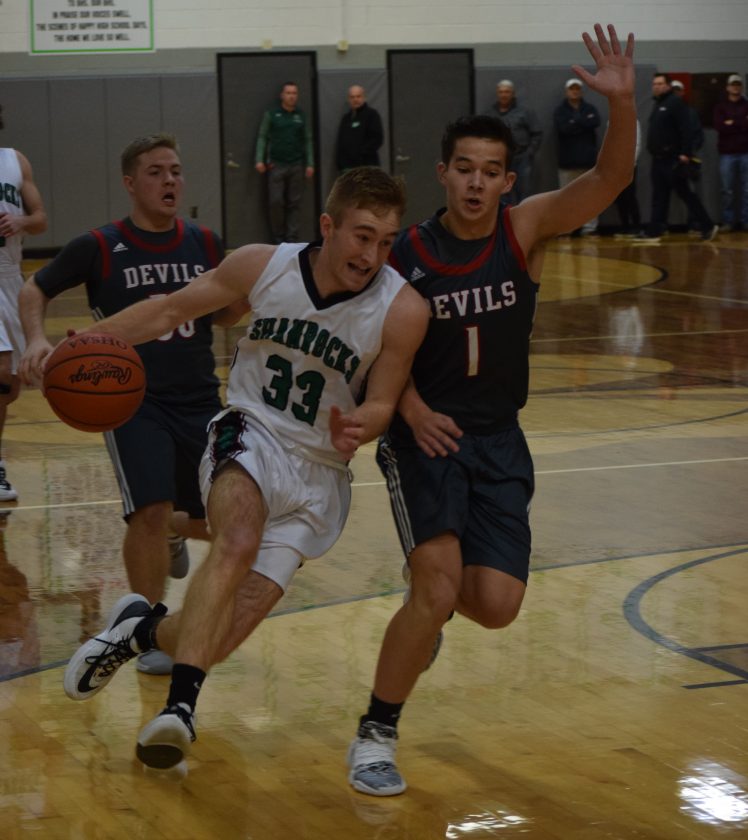 Clifford then looked up at the side panel of the scoreboard inside the Barnesville High School gymnasium and saw the number beside Powell’s number 33 on the scoreboard.

“Sometimes you have to tip your cap to a really good player,” Clifford said. “I told Cade Wolfe (who was guarding Powell for much of the game) that he made (Powell) work for everything he got. He’s a really, really good player.”

Indeed. And Powell is exactly that.

For the second time this week, the West Liberty bound senior eclipsed the 40-point mark. He followed up his 46-point outburst against River by dropping 44 on the Red Devils to fuel an 88-76 victory in front of a large and loud crowd.

“Luke is just fantastic and we’re going to hang our hat on him,” Barnesville head coach Matt Johnson said. “He’s going to do some things that make you scratch your head, but he’s going to do a lot more that makes you smile. He’s just an outstanding player.”

The win improves the Shamrocks to 3-0, entering a Tuesday road trip to Bellaire.

“Our kids wanted this game,” Johnson said. “This was a big win for these guys just to get over the hump against St. Clairsville. We talked about no letdowns now. This is a hungry group and I think once we get healthy, we’ll really be who we want to be.”

Powell went for that number and only had four points after a first quarter in which he didn’t force the issue to even try to score. However, the Red Devils (1-1) owned just an 18-17 lead after one.

“We told our guys you’re going to find out who you are in situations like this,” Johnson said. “We put our young guys through some tough times and adversity. They really grew up tonight because Luke was struggling early. We know we’re going to see junk defenses, but we don’t really mind that because we have guys who can get their feet set and shoot to buy us some time until Luke gets going.”

However, he came alive from there. He scored 15, including a four-point play just before halftime to push the Shamrocks to a 42-39 lead at the break.

Powell took over from there. He came off a screen and buried a corner trey. St. Clairsville was then assessed a technical foul and Powell knocked down one-of-two. On the ensuing possession, Kason Powell, who complemented his cousin with 20 points, connected on a bonus goal and the Shamrocks were off and running on what was eventually a 14-2 run to open the period.

“I told the kids in the quarter break that I thought we were wearing them down,” Clifford said. “We had been playing eight or nine guys, we’d forced a couple of turnovers (late in the third), but to their credit, they re-grouped at the quarter. It’s hard to play on the road and this was our first time out on the road. We jumped into the deep end, too. This is a really good environment, a tough place to play and they have a really good player.”

The Red Devils got as close as nine twice after the initial spurt. Clifford did everything he could to extend the game for as long as he could, but the Shamrocks, who scored 34 points in the fourth, knocked down 14-of-17 from the line during the period.

Evan Hudson was the third-leading scorer for the Shamrocks with seven.

The Red Devils are back at it Tuesday at Union Local.