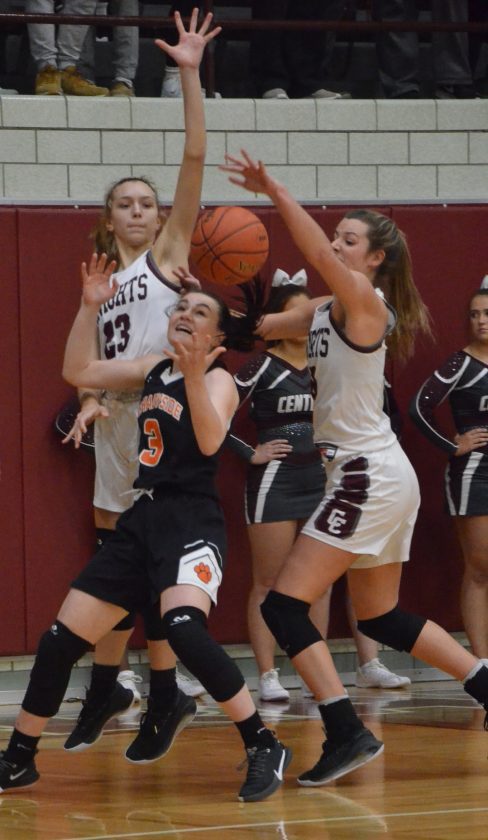 T-L Photo/KIM NORTH SHADYSIDE’S TORI Hendershot (3) tries to find a grasp on the basketball during Wednesday night’s game at Wheeling Central. Defending for the Maroon Knights are Elle Canestraro (23) and Kaylee Reinbeau. The Tigers held on for a 57-55 win.

WHEELING — Whenever Shadyside and Wheeling Central get together, no matter the sport, the fans are going to get their money’s worth. They sure did Wednesday night.

The visiting Tigers built a seemingly comfortable 18-point lead midway through the third quarter and held a 11-point margin entering the final eight minutes. However, the Maroon Knights, who were playing their season opener on Coach Skip Prosser Court after three successive road contests, battled to within one only to see the Belmont Countians hold on for a 57-55 triumph before a large and vocal crowd inside the East Wheeling gymnasium.

“They are a good team and I wouldn’t expect them to lay down on their homecourt or anywhere for that matter,” Shadyside head coach Serge Gentile said of Wheeling Central. “I figured there was going to be a run coming and we were able to (fight through) that adversity, which is huge for us right now … huge.

“I’m happy with the outcome, obviously, but I’m happier with how we were able to persevere through that rough time on the road time in a hostile environment against a rival,” he added. “We were able to make some big plays there at the end to extend the lead to six and withstand their run.”

Shadyside (4-2) led 41-23 with a little more than four minutes left on the third-quarter clock. Wheeling Central (1-3), however, netted 11 of the quarter’s final 15 tallies to slice into the deficit.

The Maroon Knights talented duo of Hannah White and Kaylee Reinbeau fueled the comeback with eight and seven points, respectively.

Shadyside had trouble holding onto the ball in the fourth quarter as its 11 turnovers attested. White and Reinbeau made them nearly pay.

White cashed in both ends of a bonus situation with 5:52 left to play that made it a 47-44 count in favor of the Tigers. Tristen White’s bucket from the left baseline got the hosts to within a point 30 seconds later, but they could never get the equalizer as Shadyside reeled off 10 of the next 15 points for a six-point bulge, 57-51, when Tori Hendershot split a pair of defenders at the top of the key and drove down the lane for a layup with 46 ticks remaining.

“We can’t get that far behind. That’s too far to try and come back against a team like Shadyside,” Wheeling Central head coach Penn Kurtz assessed. “I was proud of the effort we gave. I just wish we could’ve gave that effort for the whole game.”

Reserve Gentry Brown had two huge buckets down the stretch for Shadyside.

Wheeling Central had a chance to tie the game, or win it, after a missed free throw by the Tigers with 13.4 seconds showing. However, the Maroon Knights turned the ball over with time winding down as Shadyside’s Baylee Wach came up with it as the buzzer sounded.

“She’s a special one. Her motor never stops and it seems like she plays 100 miles an hour,” Gentile explained of Hendershot, who finished with 20 points, nine rebounds, eight steals and three assists. “A lot of times that will get you in trouble, but not with her. She can play that fast, handle the ball and see the floor. She can do it all.”

Wheeling Central played without Columbia University-bound Eden Gainer who sustained a knee injury over the weekend. Her status is unknown at this time, according to Kurtz.

Both teams had 25 turnovers.