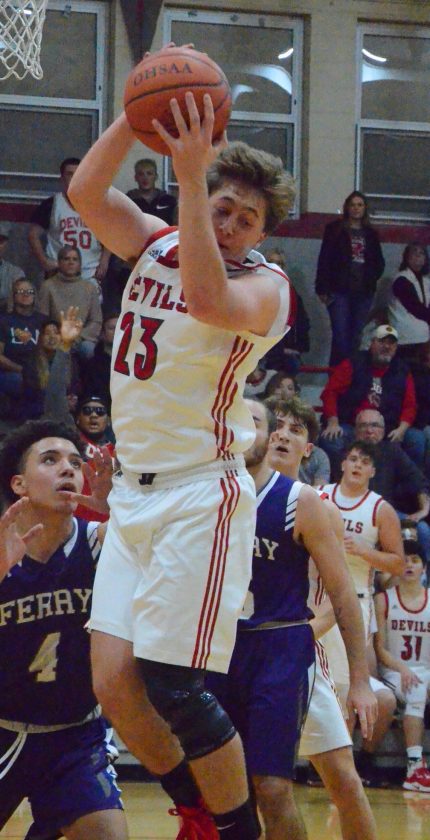 T-L Photo/KIM NORTH ST. CLAIRSVILLE’S Drew Sefsick (23) pulls down one of his eight rebounds during Tuesday’s Buckeye 8 encounter with Martins Ferry on John Jenkins Court. Looking on is the Purple Riders’ Davian Ray (4).

ST. CLAIRSVILLE — St. Clairsville has been known for its outside shooting over the years. Entering the second half Tuesday night against Buckeye 8 rival Martins Ferry, the Red Devils hadn’t made a single three-point goal despite holding a 24-19 advantage.

That all changed in the second half, more specifically the third quarter, when the debuting hosts connected for bonus goals on three successive trips down the floor to take command en route to a 76-51 pounding on John Jenkins Court before a raucous crowd.

“I thought we played great defensively in the first half, but we didn’t shoot the ball like a typical St. Clairsville team shoots it,” second-year head coach Ryan Clifford explained. “At halftime I looked at Will Balgo and Brett Vike and told them you haven’t scored yet and we’re up by five. We’re in great shape.”

Balgo took Clifford’s comment to heart as he drained a pair of bonus bombs — one from each wing — before Vike hit one from downtown as a 26-22 edge ballooned to 35-22 real quick.

“Will was outstanding in the third quarter. He never lost his confidence and knocked them down,” Clifford said of his 6-1 junior. Balgo netted eight of his 19 points in the quarter and tallied 17 of his total after the intermission.

Senior point guard Nate Harris carried the Red Devils in the first half with a dozen points. He added 11 in that pivotal third frame and finished with a game-leading 26.

“Nate deserves everything he gets. No one works harder than Nate,” Clifford praised. “He gets the most out of every possession. I love him as our point guard.”

In addition to his game-high point total, the 5-7 Harris also collected half-a-dozen rebounds and charted five steals and four assists.

Martins Ferry’s Caleb Olson stopped the onslaught with a bucket, but the Red Devils reeled off 16 of the final 20 points of the quarter for a commanding, 51-28, margin.

“All the credit goes to St. Clairsville,” Martins Ferry head coach Derek Edwards allowed. “We did not show up to play. We got outcoached and we got outplayed in every facet of the game. We did not show up.”

“He was excited. We went to him early and it got him involved in the game,” Clifford said of his 6-7, 350-pounder. “There were times that he was dominant on the glass. He gets us out in transition off of it. Great effort for a sophomore.”

Vike and Drew Sefsick, off the bench, evenly divided 14 markers. Balgo and Sefsick each yanked down eight boards as the hosts led 52-43 off the glass.

Martins Ferry was paced by Logan Smith with 15 points. Dasyn Hores added 10 and a team-best 11 rebounds. Smith had eight caroms.

The Purple Riders turned the ball over 20 times to just 15 for the Red Devils, of which eight of those came in the final quarter when the outcome was well in hand.

Both teams are back in action Friday as St. Clairsville travels to Barnesville while the Purple Riders welcome Union Local to Tolbert Gymnasium.