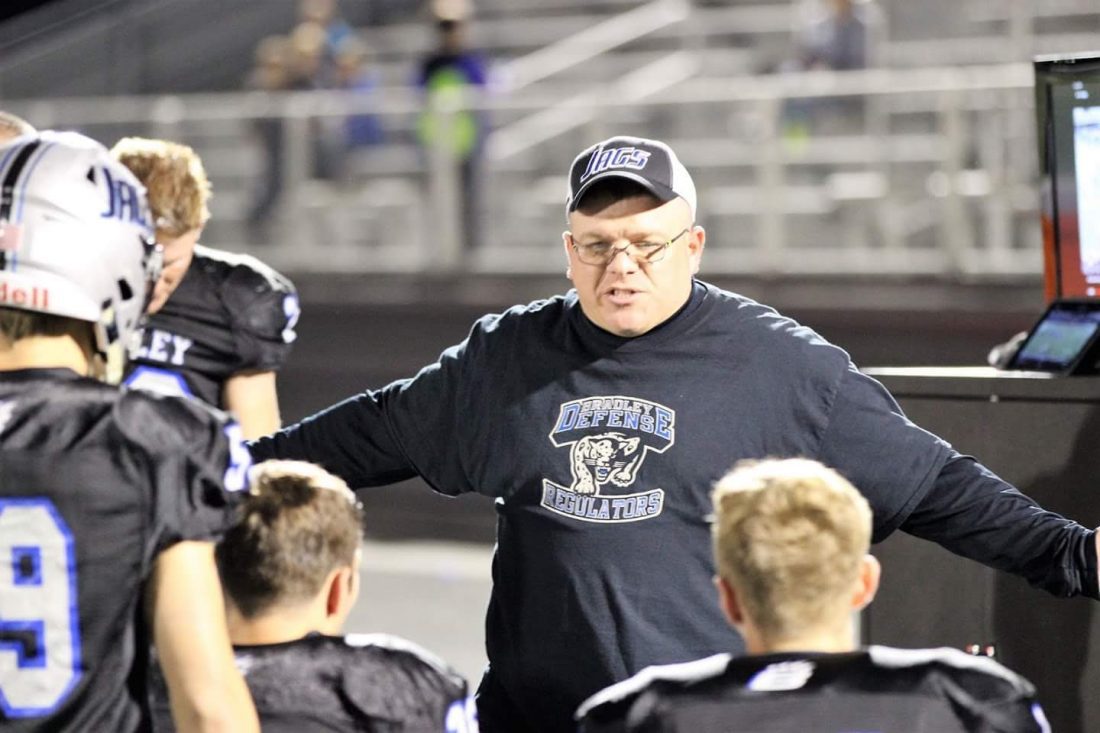 BRIDGEPORT GRADUATE Mike Picetti (Class of 1997) talks to the Hilliard Bradley defense after a game last season. Picetti was hired late last month as the head football coach at Thomas Worthington after spending more than 20 years working as an assistant at a bevy of schools.

WORTHINGTON — Often times, as it pertains to landing a job, persistence is the key.

Mike Picetti is a prime example.

After a lengthy — 21 years to be exact — career as an assistant coach, the Bridgeport graduate has landed his first head coaching gig.

Picetti had been in the mix for other jobs in the Ohio Capital Conference, but finally got the call he’d been hoping for from Worthington just a few days after Christmas.

“(Being a head coach) is something that I’ve been looking at for the last five or six years, honestly,” Picetti said. “I was a finalist at three or four different schools, but it was Thomas Worthington that pulled the trigger and I am fortunate to have this opportunity.”

Thomas Worthington finished the 2019 season with a 4-6 record, including a 35-7 loss to Picetti’s former employer, Hilliard Darby on Oct. 11. Matt Zingery stepped down after three seasons and 11 victories.

“Before Coach Zingery, the coach at Thomas Worthington hadn’t won 11 games in six years, so Matt did a nice job of laying the groundwork to help getting the program where it needs to be,” Picetti said. “The last time we had a season over .500 was 1999. We have a good group of kids coming back.”

Picetti’s hiring means both public schools in the city of Worthington employ Ohio Valley natives as their head coach.

“It’s kind of ironic that both schools in Worthington are coached by valley guys,” Picetti said. “Plus, I just interviewed two valley guys to possibly join my staff, so there is Ohio Valley all around me.”

That Ohio Valley mentality that Picetti learned at Bridgeport under Rick Goodrich is something that he hopes to bring to the Thomas Worthington program.

“The word I use is grit,” Picetti said. “I grew up in an era when Bridgeport had something like 120 boys and 68 were out for football. We had some great years, too. And it came down to Coach Goodrich instilling hard work and grittiness into us.”

Picetti gives a lot of credit both in his personal and professional life to Goodrich, who guided the Bulldogs to the playoffs in Picetti’s senior season of 1996.

“Goody was like a second father to me and many of the kids on the team,” Picetti said. “That’s something that I want to bring to these kids.”

Picetti actually cut his coaching teeth under Goodrich when he was at Cambridge. Picetti had suffered an injury that cut his playing career at Muskingum short, so he approached his former coach about helping out.

“That was my junior year at Muskingum and I’ve been doing it ever since,” Picetti said. “(Coaching) is something that just kind of bites you and you kind of live with it.”

After finishing his degree in elementary and special education at Muskingum, Picetti landed his first teaching and coaching job at Mt. Gilead. He was there for two years and then became the co-defensive coordinator at Westerville North for one season.

He then embarked on a two-year stay as defensive coordinator at Westland and then accepted a job both teaching and coaching at Olentangy. While he remains there until the end of the school year as a teacher, he spent eight years, four of which were as defensive coordinator, on the football staff. During that stint, Olentangy won a regional title and Picetti was named Central District Assistant Coach of the Year.

“I’ve been blessed to be able to work under some great coaches in some highly respected programs in Central Ohio,” Picetti said. “I’ve worked under guys who’ve won state titles, guys who have been state coaches of the year and just learned how to do things the right way. I’ll absolutely take a little bit of each of those to help form how I run a program.”

Before landing the post he held most recently, Picetti spent a season coaching at Otterbein University in Westerville.

Though he’s made basically the entire circle around Interstate 270, Picetti believes he’s found his “destination job.”

“I don’t see myself going anywhere else,” Picetti said. “Worthington is a great community and the schools are outstanding. It’s been a (football) program dying for a winner for a long time.”

Picetti has hit the ground running in his new job. He had a meeting with his players last week and had his first weight lifting session on Friday.

“We probably had between 60 and 65 kids there, but we have a lot of multi-sport kids here because we offer 22 varsity sports,” Picetti said. “We had 250 people, counting parents, from junior high up attend the meeting. I think the kids are excited for a change and they’re looking forward to seeing what kind of differences there are.”

As he forms his staff, Picetti has had his phone ringing off the hook with coaches wanting to be part of it.

“I’m looking at some guys who have been on staffs who have won regional and Ohio Capital Conference titles. We are trying to hire good, solid coaches who will help build this foundation.”

Mike and his wife, Gina, who is a native of Pataskala, have two children, Angelo (10) and Gabriella (7).