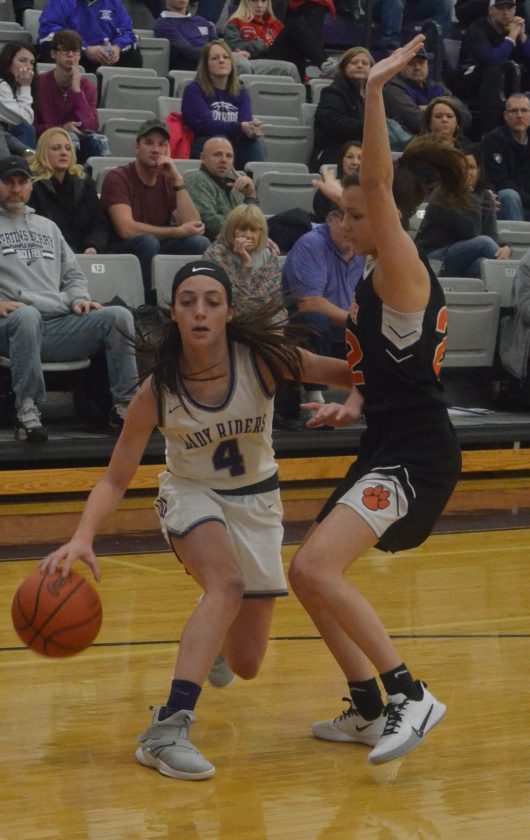 Behind a 14-3 second-quarter scoring advantage and a staunch defensive effort, Reasbeck’s Martins Ferry Purple Riders picked up their biggest victory of the season, holding off Shadyside, 38-33, in girls’ basketball action inside Tolbert Gymnasium.

“We have some wins, but we didn’t have any quality wins,” Reasbeck explained outside a victorious Martins Ferry locker room.

“We won games that we were supposed to win. This was a quality win. (Shadyside’s) resume speaks for itself. We didn’t play well down there the first time (a 59-44 loss in the season opener). We were a little wide-eyed. We needed this win to validate ourselves.”

Now 9-5, the Purple Riders visit Beaver Local on Monday hoping to sweep the Beavers and cement their hold on an OVAC Class 4A tournament berth with the cutoff looming.

“I can’t be any happier,” Reasbeck said.

Richella Spielvogel muscled her way to a team-high 13 points as the Purple Riders capitalized on a 20-4 run that stretched from the second quarter to midway through the third.

Spielvogel had a big hand in it, as did Allarah Jones, who scored eight points off the bench, with four coming in the second.

“Our defense played very well,” Reasbeck noted. “We played hard. We rebounded. It was a total effort.

“Allarah came off the bench when Richella was struggling and she gave us an unbelievable lift. Then, in the third, Richella came out and played well and Shayla (Schuster) handled the ball well and kept their two stars in check. It was a total team effort.”

As the third quarter wound down, the Tigers started to find their mojo after struggling to get into an offensive rhythm early.

“I knew we weren’t going to lay down,” said Shadyside head coach Serge Gentile, who’s team ended the period on a 9-3 run to close to within five.

“Those girls are competitors. I knew they’d give the effort that we needed. We did that and were able to claw back and get some opportunities.”

Speilvogel started the fourth with three straight points putting Martins Ferry up 30-22. But the Tigers (12-5) answered with back-to-back 3s by Julie Hendershot and Brooke Selmon, making it a 30-28 game with 5 minutes left.

The Purple Riders entered the bonus moments later, and Spielvogel and Ging both went 1 of 2 from the line as the hosts went up 32-28.

Wach, a junior, finished with 10 points and surpassed the 1,000-point mark for her career on the second of three first-quarter treys.

The Tigers, however, never got closer as Martins Ferry did what it had to do down the stretch to maintain its lead, whether it was a free throw, defensive stop or shot.

“We knew (Shadyside) would start getting shots to go in,” Reasbeck said. “We just had to stick with the program. Once they cut the lead down to three, we rebounded and were able to handle the press.”

HANNIBAL — To go far in the postseason, Zach Delman knows his team’s defense needs to be purring like a ...